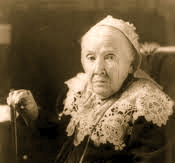 The Battle Hymn of the Republic 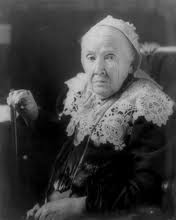 Julia Ward Howe (May 27, 1819 – October 17, 1910) was a prominent American abolitionist, social activist, and poet, most famous as the author of “The Battle Hymn of the Republic.”

Born Julia Ward in New York City, she was the fourth child of banker Samuel Ward and occasional poet Julia Rush Cutler. Among her siblings was Samuel Cutler Ward. Her father was a well-to-do banker. Her mother, granddaughter of William Greene (August 16, 1731 – November 30, 1809), Governor of Rhode Island and his wife Catharine Ray, died when Julia was five after having borne seven children by the age of 27.

In 1843, she married Samuel Gridley Howe (1801 – 1876), a physician and reformer who founded the Perkins School for the Blind in Boston, Massachusetts.   They announced their engagement quite suddenly on February 21; though Howe had courted Julia for a time, he had more recently shown an interest in her sister Louisa.

Her book, Passion-Flowers, was published in December 1853. The book collected intensely personal poems and was written without the awareness of her husband, who was then editing the Free Soil newspaper The Commonwealth.

Julia Ward Howe was inspired to write “The Battle Hymn of the Republic” after she and her husband visited Washington, D. C. and met Abraham Lincoln at the White House in November 1861. During the trip, her friend James Freeman Clarke suggested she write new words to the song “John Brown’s Body“, which she did on November 19.   The song was set to William Steffe‘s already-existing music and Howe’s version was first published in the Atlantic Monthly in February 1862. It quickly became one of the most popular songs of the Union during the American Civil War.

After the war Howe focused her activities on the causes of pacifism and women’s suffrage. In 1870 she wrote her Mother’s Day Proclamation. It was a “Mother’s Day for Peace”, asking women from the world to join for world’s peace. In 1872, she asked that “Mother’s Day” be celebrated on the 2nd of June.   Her efforts were not successful, and by 1893 she was wondering if the 4th of July could be remade into “Mother’s Day.”   From 1872 to 1879, she assisted Lucy Stone and Henry Brown Blackwell in editing Woman’s Journal.

Howe died of pneumonia October 17, 1910, at her home, Oak Glen, in Portsmouth, Rhode Island, at the age of 91.  She is buried in the Mount Auburn Cemetery in Cambridge, Massachusetts.

After her death, her children collaborated on a biography, published in 1916. It won the Pulitzer Prize for Biography.