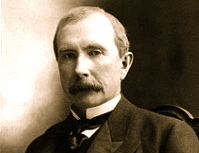 John D. Rockefeller A Short Bio of the 1st Billionaire 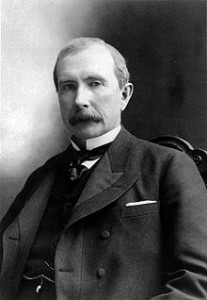 He was an American industrialistand philanthropist. He was the founder of the Standard Oil Company, which dominated the oil industry and was the first great U.S. business trust. Rockefeller revolutionized the petroleum industry and defined the structure of modern philanthropy. In 1870, he founded the Standard Oil Company and aggressively ran it until he officially retired in 1897.  Standard Oil began as an Ohio partnership formed by John D. Rockefeller, his brother William Rockefeller, Henry Flagler, Jabez Bostwick, chemist Samuel Andrews, and a silent partner, Stephen V. Harkness. As kerosene and gasoline grew in importance, Rockefeller’s wealth soared, and he became the world’s richest man and the first American worth more than a billion dollars.   Adjusting for inflation, he is often regarded as the richest person in history.

Rockefeller spent the last 40 years of his life in retirement. His fortune was mainly used to create the modern systematic approach of targeted philanthropy. He was able to do this through the creation of foundations that had a major effect on medicine, education, and scientific research.

His foundations pioneered the development of medical research, and were instrumental in the eradication of hookworm and yellow fever. He is also the founder of both the University of Chicago and Rockefeller University. He was a devoted Northern Baptist and supported many church-based institutions throughout his life. Rockefeller adhered to total abstinence from alcohol and tobacco throughout his life.

He had four daughters and one son; John D. Rockefeller, Jr. “Junior” was largely entrusted with the supervision of the foundations.

Rockefeller was the second of six children born in Richford, New York, to William Avery Rockefeller (November 13, 1810 – May 11, 1906) and Eliza (Davison; September 12, 1813 – March 28, 1889). Genealogists trace some of his ancestors to French Huguenots who fled to Germany in the 17th century.   His father, first a lumberman, then a traveling salesman, billed himself as a “botanic physician” and sold elixirs. The locals referred to the mysterious but fun-loving man as “Big Bill,” and “Devil Bill.”He was a sworn foe of conventional morality, who had opted for a vagabond existence and who returned to his family infrequently. Throughout his life, William Avery Rockefeller gained a reputation for shady schemes rather than productive work.   Eliza, a homemaker and devout Baptist, struggled to maintain a semblance of stability at home, as William was frequently gone for extended periods. She also put up with his philandering and his double life, which included bigamy.   Thrifty by nature and necessity, she taught her son that “willful waste makes woeful want.”   Young Rockefeller did his share of the regular household chores and earned extra money raising turkeys, selling potatoes and candy and eventually lending small sums of money to neighbors. He followed his father’s advice to “trade dishes for platters” and always get the better part of any deal. Big Bill once bragged, “I cheat my boys every chance I get. I want to make ‘em sharp.”

When he was a boy, his family moved to Moravia, New York, and, in 1851, to Owego, where he attended Owego Academy. In 1853, his family moved to Strongsville, a suburb of Cleveland. Rockefeller attended Cleveland’s Central High School and then took a ten-week business course at Folsom’s Commercial College where he studied bookkeeping.

In spite of his father’s absences and frequent family moves, young Rockefeller was a well-behaved, serious and studious boy. His contemporaries described him as reserved, earnest, religious, methodical, and discreet. He was an excellent debater and expressed himself precisely. He also had a deep love of music and dreamed of it as a possible career.  Early on, he displayed an excellent mind for numbers and detailed accounting. 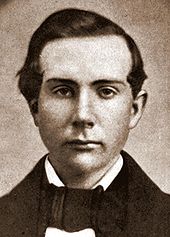 In September 1855, when Rockefeller was sixteen, he got his first job as an assistant bookkeeper, working for a small produce commission firm called Hewitt & Tuttle. He worked long hours and delighted, as he later recalled, in “all the methods and systems of the office.”  He was particularly adept at calculating transportation costs, which served him well later in his career. The full salary for his first three months’ work was $50 (50 cents a day).  From the beginning, he donated about 6% of his earnings to charity, which increased to 10% by the age of twenty, when he tithed to his Baptist church.

As a youth, Rockefeller reportedly said that his two great ambitions were to make $100,000 and to live 100 years.

In 1859, Rockefeller went into the produce commission business with a partner, Maurice B. Clark, and they raised $4,000 in capital. Rockefeller went steadily ahead in business from there, making money each year of his career.   After wholesale foodstuffs, the partners built an oil refinery in 1863 in “The Flats,” then Cleveland’s burgeoning industrial area. The refinery was directly owned by Andrews, Clark & Company, which was composed of Clark & Rockefeller, chemist Samuel Andrews, and M. B. Clark’s two brothers. The commercial oil business was in its infancy. Whale oil had become too expensive for the masses, and a cheaper, general-purpose lighting fuel was needed.

While his brother Frank fought in the Civil War, Rockefeller tended his business and hired substitute soldiers. He gave money to the Union cause, as did many rich Northerners who avoided combat.   In February 1865, in what was later described by oil industry historian Daniel Yergin as a “critical” action, Rockefeller bought out the Clark brothers for $72,500 at auction and established the firm of Rockefeller & Andrews. Rockefeller said, “It was the day that determined my career.”  He was well-positioned to take advantage of post-war prosperity and the great expansion westward, fostered by the growth of railroads and an oil-fueled economy. He borrowed heavily, reinvested profits, adapted rapidly to changing markets, and fielded observers to track the quickly expanding industry.

In 1864, Rockefeller married Laura Celestia “Cettie” Spelman. They had four daughters and one son together. He said later, “Her judgment was always better than mine. Without her keen advice, I would be a poor man.”

Rockefeller became a lifelong member of the then-new Republican Party, and a strong supporter of Abraham Lincoln and the party’s abolitionist wing.  He was a faithful congregant of the Erie Street Baptist Mission Church, where he taught Sunday school, and served as a trustee, clerk, and occasional janitor.   Religion was a guiding force throughout his life, and Rockefeller believed it to be the source of his success. As he said, “God gave me money”, and he did not apologize for it. He felt at ease and righteous following John Wesley’s dictum, “gain all you can, save all you can, and give all you can.”

In 1866, his brother William Rockefeller built another refinery in Cleveland and brought John into the partnership. In 1867, Henry M. Flagler became a partner, and the firm of Rockefeller, Andrews & Flagler was established. By 1868, with Rockefeller continuing practices of borrowing and reinvesting profits, controlling cost and using refineries’ waste, the company owned two Cleveland refineries and a marketing subsidiary in New York; it was the largest oil refinery in the world.   Rockefeller, Andrews & Flagler was the predecessor of the Standard Oil Company. 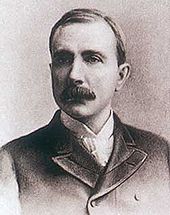 By the end of the American Civil War, Cleveland was one of the five main refining centers in the U.S. (besides Pittsburgh, Philadelphia, New York, and the region in northwestern Pennsylvaniawhere most of the oil originated). In June 1870, Rockefeller formed Standard Oil of Ohio, which rapidly became the most profitable refiner in Ohio. Standard Oil grew to become one of the largest shippers of oil and kerosene in the country. The railroads were fighting fiercely for traffic and, in an attempt to create a cartel to control freight rates, formed the South Improvement Company, in collusion with Standard and other oil men outside the main oil centers.  The cartel received preferential treatment as a high-volume shipper, which included not just steep rebates of up to 50% for their product, but also rebates for the shipment of competing products.   Part of this scheme was the announcement of sharply increased freight charges. This touched off a firestorm of protest from independent oil well owners, including boycotts and vandalism, which eventually led to the discovery of Standard Oil’s part in the deal. A major New York refiner, Charles Pratt and Company, headed by Charles Pratt and Henry H. Rogers, led the opposition to this plan, and railroads soon backed off. Pennsylvania revoked the cartel’s charter and equal rates were restored for the time being.

Undeterred, though vilified for the first time by the press, Rockefeller continued with his self-reinforcing cycle of buying competing refiners, improving the efficiency of his operations, pressing for discounts on oil shipments, undercutting his competition, making secret deals, raising investment pools, and buying rivals out. In less than four months in 1872, in what was later known as “The Cleveland Conquest” or “The Cleveland Massacre”, Standard Oil had absorbed 22 of its 26 Cleveland competitors.   Eventually, even his former antagonists, Pratt and Rogers, saw the futility of continuing to compete against Standard Oil: in 1874, they made a secret agreement with their old nemesis to be acquired. Pratt and Rogers became Rockefeller’s partners. Rogers, in particular, became one of Rockefeller’s key men in the formation of the Standard Oil Trust. Pratt’s son, Charles Millard Pratt became Secretary of Standard Oil. For many of his competitors, Rockefeller had merely to show them his books so they could see what they were up against, then make them a decent offer. If they refused his offer, he told them he would run them into bankruptcy, then cheaply buy up their assets at auction. He saw himself as the industry’s savior, “an angel of mercy”, absorbing the weak and making the industry as a whole stronger, more efficient, and more competitive.   Standard was growing horizontally and vertically. It added its own pipelines, tank cars, and home delivery network. It kept oil prices low to stave off competitors, made its products affordable to the average household, and to increase market penetration, sometimes sold below cost if necessary. It developed over 300 oil-based products from tar to paint to Vaseline petroleum jelly to chewing gum. By the end of the 1870’s, Standard was refining over 90% of the oil in the U.S. Rockefeller had already become a millionaire.