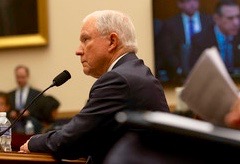 Despite his lack of clarity on what transpired, Sessions said he believes he rejected the suggested meeting with Putin. Attorney General Jeff Sessions said Tuesday he never lied under oath about Moscow’s interference in the 2016 election and said he didn’t recall conversations with Trump campaign aides about their Russia-linked contacts until he saw news reports about them. At his first appearance before the House Judiciary Committee, Sessions said he has “no clear recollection” of what was said at a session at which a Trump campaign associate, George Papadopoulos, proposed organizing a meeting between then-candidate Donald Trump and Russian President Vladimir Putin.

Jeff Sessions Gets Hammered for Repeatedly Telling Congress “I Don’t Recall” Russia Contacts: “I get to ask the questions, you provide the answers in this capacity. You’re no longer in the United States Senate.” by Inae Oh 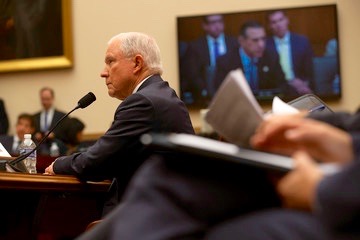 Attorney General Jeff Sessions faced a grilling in Congress on Tuesday over his repeated failure to remember key facts about communications between the Donald Trump campaign and Russian officials during the 2016 presidential race.

Rep. Hakeem Jeffries (D-N.Y.) presented Sessions with dozens of instances in which Sessions answered “I do not recall” when asked by members of Congress about contacts between the campaign and Russia. Jeffries also suggested that Sessions’ faulty memory betrayed hypocrisy, since Sessions had suggested last year that Hillary Clinton was guilty of perjury when she couldn’t remember things during the FBI probe into her emails. He also pointed to Sessions’ past arguments in favor of removing President Bill Clinton from office for inaccurately recounting events in the Monica Lewinsky scandal.

“The attorney general should not be held to a different standard on perjury,” Jeffries said.

At one point, when Sessions tried to ask him if he believed an encounter with Trump aide Carter Page was improper, Jeffries forcefully reminded Sessions that he was no longer a senator and should be answering, not asking, questions.

“You understand sir, that I get to ask the questions, you provide the answers in this capacity,” Jeffries said. “You’re no longer in the United States Senate.”

The fiery exchange came less than two weeks after revelations that Sessions had attended a March 2016 meeting at which former Trump campaign aide George Papadopoulos said he was in contact with the Russians and proposed setting up a meeting between Trump and Russian President Vladimir Putin. Sessions had told Congress that he was unaware of contacts between Trump associates and the Kremlin.

“Frankly, I had no recollection of this meeting until I saw these news reports,” Sessions said on Tuesday in his opening remarks to the House Judiciary Committee, where he was testifying on Justice Department oversight matters. Sessions said he now believes he did instruct Papadopoulos to abandon the idea of a Trump-Putin meeting. But he also forcefully rejected accusations that he has lied under oath.

“I will not accept and reject accusations that I have ever lied,” he said. “That is a lie.”

He continued, “But it was a form of chaos every day from day one. We traveled all the time—sometimes to several places in one day. Sleep was in short supply.”

The failure to recall the Papadopoulos incident was one of several instances in which Sessions appeared to make false statements to Congress regarding contacts with Russian officials.