This is part of the documentary a unknown person directed, shot and edited. This person focused on a specific Japanese-American group in Southern California and collected their experience. It’s a story of tenacity. If you like it, let this person know, more for collaboration!

Japanese Day parade in Seattle, during the Alaska-Yukon-Pacific Exposition of 1909.

Japanese American history is the history of Japanese Americans or the history of ethnic Japanese in the United States. People from Japan began emigrating to the U.S. in significant numbers following the political, cultural, and social changes stemming from the 1868 Meiji Restoration. Japanese immigration to the Americas started with immigration to Hawaii in the first year of the Meiji period in 1868. 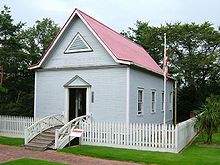 Although Japanese castaways such as Oguri Jukichi and Otokichi are known to have reached the Americas by at least the early 19th century, the history of Japanese Americans begins in the mid nineteenth century.

People from Japan began emigrating to the U.S. in significant numbers following the political, cultural, and social changes stemming from the 1868 Meiji Restoration. Japanese immigration to the Americas started with immigration to Hawaii in the first year of the Meiji period in 1868.

The ban on immigration produced unusually well-defined generational groups within the Japanese American community. Initially, there was an immigrant generation, the Issei, and their U.S.-born children, the Nisei Japanese American. The Issei were exclusively those who had immigrated before 1924. Because no new immigrants were permitted, all Japanese Americans born after 1924 were—by definition—born in the U.S. This generation, the Nisei, became a distinct cohort from the Issei generation in terms of age, citizenship, and English language ability, in addition to the usual generational differences. Institutional and interpersonal racism led many of the Nisei to marry other Nisei, resulting in a third distinct generation of Japanese Americans, the Sansei. Significant Japanese immigration did not occur until the Immigration Act of 1965 ended 40 years of bans against immigration from Japan and other countries.

The Naturalization Act of 1790 restricted naturalized U.S. citizenship to “free white persons,” which excluded the Issei from citizenship. As a result, the Issei were unable to vote, and faced additional restrictions such as the inability to own land under many state laws.

Like most of the American population, Japanese immigrants came to the U.S. in search of a better life. Some planned to stay and build families in the United States, while others wanted to save money from working stateside to better themselves in the country from which they had come. Before the Attack on Pearl Harbor, Japanese residents experienced a moderate level of hardship that was fairly typical for any minority group at the time.

Japanese Americans have made significant contributions to the agriculture of the western United States, particularly in California and Hawaii. Nineteenth century Japanese immigrants introduced sophisticated irrigation methods that enabled the cultivation of fruits, vegetables, and flowers on previously marginal lands.

While the Issei (1st generation Japanese Americans) prospered in the early 20th century, most lost their farms during the internment. Although this was the case, Japanese Americans remain involved in these industries today, particularly in southern California and to some extent, Arizona by the areas’ year-round agricultural economy, and descendants of Japanese pickers who adapted farming in Oregon and Washington state.

Japanese American detainees irrigated and cultivated lands near World War II internment camps, which were located in desolate spots such as Poston, in the Arizona desert, and Tule Lake, California, at a dry mountain lake bed. Due to their tenacious efforts, these farm lands remain productive today. 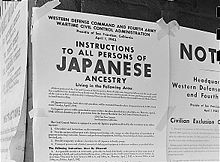 During World War II, an estimated 120,000 Japanese Americans and Japanese nationals or citizens residing in the United States were forcibly interned in ten different camps across the US, mostly in the west. The internments were based on the race or ancestry rather than activities of the interned. Families, including children, were interned together. Each member of the family was allowed to bring two suitcases of their belongings. Each family, regardless of its size, was given one room to live in. The camps were fenced in and patrolled by armed guards. For the most part, the internees remained in the camps until the end of the war, when they left the camps to rebuild their lives.

Many Japanese Americans served with great distinction during World War II in the American forces.

Nebraska Nisei Ben Kuroki became a famous Japanese-American soldier of the war after he completed 30 missions as a gunner on B-24 Liberators with the 93rd Bombardment Group in Europe. When he returned to the US he was interviewed on radio and made numerous public appearances, including one at San Francisco’s Commonwealth Club where he was given a ten-minute standing ovation after his speech. Kuroki’s acceptance by the California businessmen was the turning point in attitudes toward Japanese on the West Coast. Kuroki volunteered to fly on a B-29 crew against his parent’s homeland and was the only Nisei to fly missions over Japan. He was awarded a belated Distinguished Service Medal by President George W. Bush in August 2005. 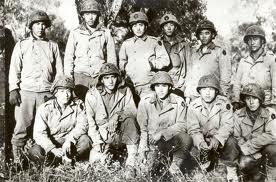 The 442nd Regimental Combat Team/100th Infantry Battalion is one of the most highly decorated unit in U.S. military history. Composed of Japanese Americans, the 442nd/100th fought valiantly in the European Theater. The 522nd Nisei Field Artillery Battalion was one of the first units to liberate the prisoners of the Nazi concentration camp at Dachau. Hawaiʻi Senator Daniel Inouyewas a veteran of the 442nd. Additionally the Military Intelligence Service consisted of Japanese Americans who served in the Pacific Front.

On October 5, 2010, the Congressional Gold Medal was awarded to the 442nd Regimental Combat Team and the 100th Infantry Battalion, as well as the 6,000 Japanese Americans who served in the Military Intelligence Service during the war.