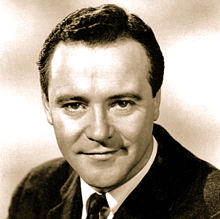 How To Kill Your Wife Jack Lemmon Comedy 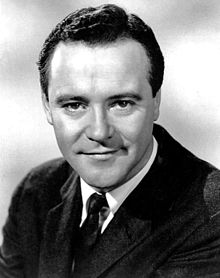 John Uhler “Jack” Lemmon III (February 8, 1925 – June 27, 2001) was an American actor and musician. He starred in more than 60 films, including Some Like It Hot, The Apartment, Mister Roberts (for which he won the 1955 Best Supporting Actor Academy Award), Days of Wine and Roses, The Great Race, Irma la Douce, The Odd Couple, Save the Tiger (for which he won the 1973 Best Actor Academy Award), The Out-of-Towners, The China Syndrome, Missing (for which he won Best Actor at the 1982 Cannes Film Festival), Glengarry Glen Ross, Grumpy Old Men, and Grumpier Old Men.

Lemmon was born in an elevator at Newton-Wellesley Hospital in Newton, Massachusetts, a suburb of Boston. He was the only child of Mildred Burgess LaRue (née Noel) and John Uhler Lemmon, Jr., the president of a doughnutcompany.  Lemmon attended John Ward Elementary School in Newton and The Rivers School in Weston, Massachusetts. He stated that he knew he wanted to be an actor from the age of eight. Lemmon attended Phillips Academy (Class of 1943) and Harvard University (Class of 1947), where he lived in Eliot House and was an active member of several Drama Clubs – and president of the Hasty Pudding Club – as well as a member of the Delphic Club for Gentleman, a final club at Harvard. After Harvard, Lemmon joined the Navy, receiving V-12 training and serving as an ensign. On being discharged, he took up acting professionally, working on radio, television and Broadway.  He studied acting under coach Uta Hagen.  He was enamored of the piano and learned to play it on his own. He could also play the harmonica, guitar, organ, and the double bass. 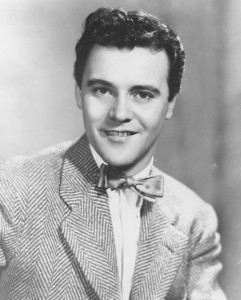 Lemmon’s film debut was a bit part as a plasterer/painter in the 1949 film The Lady Takes a Sailor, but he went unnoticed until his debut, opposite Judy Holliday, in the 1954 comedy It Should Happen to You.  Lemmon worked with legendary leading ladies, among them Marilyn Monroe, Natalie Wood, Betty Grable, Janet Leigh, Shirley MacLaine, Lee Remick,Romy Schneider, Doris Day, Kim Novak, Judy Holliday, Rita Hayworth, June Allyson, Virna Lisi, Ann-Margret, Sophia Loren, and many more. He was close friends with actors Tony Curtis, Ernie Kovacs, Walter Matthau, and Kevin Spacey. He made two films with Curtis, three films with Kovacs (Operation Mad Ball, Bell, Book and Candle, and It Happened to Jane), and eleven with Matthau.

Early in Lemmon’s career he met comedian Ernie Kovacs while co-starring with him in Operation Mad Ball.  Lemmon and Kovacs became close friends and appeared together in two subsequent films, Bell, Book and Candle and It Happened to Jane In 1977 PBS broadcast a compilation series of Kovacs’s television work, and Lemmon served as the narrator of the series. Lemmon discussed his friendship with Kovacs in the documentary, Ernie Kovacs: Television’s Original Genius.

He was a favorite of director Billy Wilder, starring in the films Some Like It Hot (for which he was awarded Best Actor at the Cannes Film Festival), The Apartment, Irma la Douce, The Fortune Cookie, Avanti!, The Front Page, and Buddy Buddy. Wilder felt Lemmon had a natural tendency toward overacting that had to be tempered; the Wilder biography Nobody’s Perfect quotes the director as saying, “Lemmon, I would describe him as a ham, a fine ham, and with ham you have to trim a little fat”. The biography quotes Lemmon as saying, “I am particularly susceptible to the parts I play… If my character was having a nervous breakdown, I started to have one.” 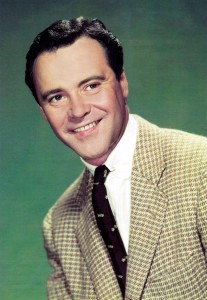 Lemmon recorded an album in 1958 while filming Some Like It Hot with Marilyn Monroe. Twelve jazz tracks were created for Lemmon and another twelve were added. Lemmon played the piano and recorded his own renditions of Monroe’s trademark songs, I Wanna Be Loved By You and I’m Through With Love, for the album which was released in 1959 as A Twist of Lemmon/Some Like It Hot.

Lemmon was awarded the Best Supporting Actor Oscar in 1956 for Mister Roberts (1955) and the Best Actor Oscar for Save the Tiger (1973), becoming the first actor to achieve this rare double (the only other actors to achieve this are: Robert De Niro, Gene Hackman, Jack Nicholson, Kevin Spacey, and Denzel Washington).  He was also nominated for a Best Actor Oscar for his role in the controversial film Missing in 1982, and for his roles in Some Like It Hot (1959), The Apartment (1960), Days of Wine and Roses (1962), The China Syndrome (1979), and Tribute (1980). He won another Cannes award for his performance in Missing (which received the Palme d’Or). In 1988, the American Film Institute gave him its Lifetime Achievement Award.

Days of Wine and Roses (1962) was a favorite role. He portrayed Joe Clay, a young, fun-loving alcoholic businessman. In that film, Lemmon delivered the line, “My name is Joe Clay … I’m an alcoholic.” Three and a half decades later, he stated on the television program Inside the Actors Studio that he was a recovering alcoholic.

Lemmon’s production company JML produced Cool Hand Luke in 1967. Paul Newman was grateful to Lemmon for his support and offered him the role of the Sundance Kid, later played by Robert Redford in Butch Cassidy and the Sundance Kid, but Lemmon turned it down. He did not like riding horses and he felt he’d already played too many aspects of the Sundance Kid’s character before. 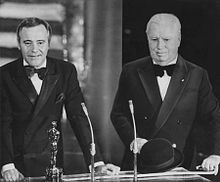 Lemmon appeared in many films partnered with actor Walter Matthau. Among their pairings was 1968’s The Odd Couple, as Felix Ungar (Lemmon) and Oscar Madison (Matthau). The first film they starred in together was The Fortune Cookie(for which Matthau won the 1966 Oscar for Best Supporting Actor), The Front Pageand Buddy Buddy. In 1971, Lemmon directed Matthau in the comedy Kotch. It was the only movie that Lemmon directed and Matthau was nominated for the Best Actor Oscar for his performance. 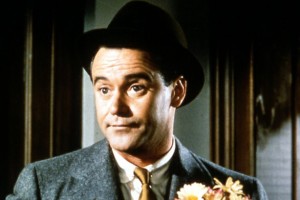 Additionally, Lemmon and Matthau had small parts in Oliver Stone‘s 1991 film, JFK(the only film in which both appeared without sharing screen time). In 1993, the duo teamed again to star in Grumpy Old Men. The film was a surprise hit, earning the two actors a new generation of young fans. During the rest of the decade, they would star together in Out to Sea, Grumpier Old Men and the widely panned The Odd Couple II. In 1996, Lemmon was awarded the Honorary Golden Bear award at the 46th Berlin International Film Festival.  Lemmon was a guest voice on The Simpsons in 1997, playing the character Frank Ormand, owner of the pretzel business that Marge Simpson franchised. The recurring character Old Gil Gunderson, voiced by Dan Castellaneta, is an ongoing parody of Lemmon’s character in Glengarry Glen Ross.

At the 1998 Golden Globe Awards, he was nominated for “Best Actor in a Made for TV Movie” for his role in Twelve Angry Men losing to Ving Rhames. After accepting the award, Rhames asked Lemmon to come on stage and, in a move that stunned the audience, gave his award to him. (The Hollywood Foreign Press Association, which presents the Golden Globes, had a second award made and sent to Rhames.).  He received the AFI Life Achievement Award in 1988. 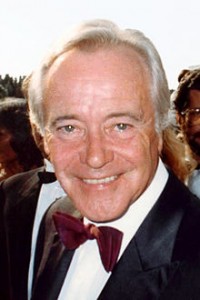 Actor Kevin Spacey recalled that Lemmon is remembered for always making time for other people. Already regarded as a legend, he met teenage Spacey backstage after a theater performance and spoke to him about pursuing an acting career.  Spacey would later work with Lemmon in The Murder of Mary Phagan (1987), Dad(1989), the critically acclaimed film Glengarry Glen Ross (1992) and on stage in a revival of Long Day’s Journey into Night. Lemmon was Spacey’s mentor, and taught Spacey that people who do well in a business have an obligation to “send the elevator back down” to help lift people starting out on the ground floor.  This metaphor is fitting given that Lemmon was born in an elevator.

In his autobiography, My Life, Burt Reynolds recalls Lemmon as the quintessential gentleman who never spoke ill of anyone, even if they deserved it. This kindness backfired for Reynolds: prior to accepting the lead in W.W. and the Dixie Dancekings (1975), directed by John G. Avildsen, Reynolds asked Lemmon, whom Avildsen had directed in Save the Tiger (1973) for an opinion of Avildsen as a director. Lemmon told Reynolds that Avildsen was “okay”, and Reynolds accepted the role. After the film was released and his experiences in production proved unhappy, Reynolds complained to Lemmon and described Avildsen as an “asshole”, whereupon Lemmon replied, “I guess you could say that.” 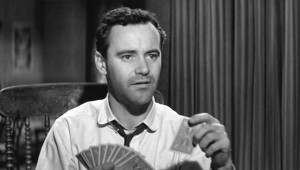 Lemmon was married twice. His son Chris Lemmon (born 1954), was his first child by his first wife, actress Cynthia Stone. His second wife was actress Felicia Farr, with whom he had a daughter, Courtney (born 1966). Farr had a daughter from a previous relationship (her marriage to Lee Farr) named Denise. Lemmon was a Catholic, and publicly announced his alcoholism during a 1998 interview on Inside the Actors Studio.

Lemmon died of colon cancer and metastatic cancer of the bladder on June 27, 2001.  He had been fighting the disease, privately, for two years before his death. He was interred at Westwood Village Memorial Park Cemetery in Westwood, California, buried near his friend and co-star, Walter Matthau, who died almost exactly one year before Lemmon. His gravestone simply reads “Jack Lemmon in,” a reference to how he was billed on film credits.  After Matthau’s death in 2000, Lemmon appeared with friends and relatives of the actor on a Larry King Live show in tribute. A year later, many of the same people appeared again on the show to pay tribute to Lemmon.