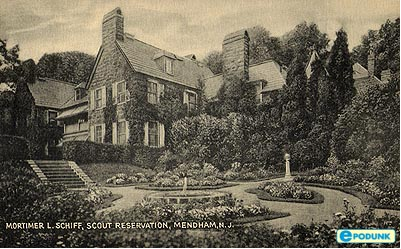 prior to 1713 no records concerning Mendham Township.  Englishman James Wilis bought land of the original proprietors about Ralstonville.  Roxiticus has an Indian name and is on a branch of the Raritan.  The first settlement of white men (thought to be Scotch and Irish Protestants) was at Indian Brook above the village.

1730’s- The family of the entrepreneur Levi Lewis came to the Mendham area. (Today there is a Levi Lewis Memorial Museum at 159 Mountainside Road, Mendham).  Before 1738 the new settlers built the first meeting-house and graveyard. There was no settled pastor.

1738- The Roxiticus log meeting house built. Roxiticus was an Indian name, given to the region including today’s Mendham and Chester Townships. (The meeting house was located along Route 24 in theÂ Ralston section of Mendham Township.)

1739- The church society asked to be transferred from the presbytery of New Brunswick to that of New York.

1740- A “great revival” took place in Bernards Township and soon after disagreements arose in the Roxiticus congregation over church policy and the decision led to the formation of two churches: the First Presbyterian Church and the First Congregational Church.

1740- The grandson of Nicholas Byram, Ebenezer Byram renovated an old farmhouse into the Black Horse Tavern. It later became the main stagecoach stop between Newark, New Jersey and Scranton, Pennsylvania. (It is still in business.)

1745- One of the Roxiticus congregations created by the doctrinal dispute was the First Presbyterian “Hilltop” Church of Mendham, established (at 20 Hilltop Road). About the only other structure in the area at the time was the Black Horse wayside inn. The church founders decided on the name of the place: “Mendham.”

1747- After the split from the Presbyterian faction of the Roxiticus worshipers, the second group of congregants established their own organization that would lead to the First Congregational Church of Chester

By 1748- Mendham Township housed iron forges, sawmills, and a gristmill. The township rose around the church. Before 1749 Job Loree lived on land west of Major Lewis Loree.

1750- The First Presbyterian Church of Roxbury was built along today’s Pleasant Hill Road, Chester Township. (The Hilltop Presbyterian congregation had sought to establish another Presbyterian church in a more location further west.)

As early as 1760- Major Henry Axtell who came from Massachusetts in 1739 lived in Mendham. Revolutionary War (1776-1782) the Hilltop Church was used as a barracks and hospital for the soldiers. A smallpox epidemic killed many soldiers.

1800- Connet from Chatham built the grist-mill where the old Smiths Mill was.  Brookside was calledÂ Watersheet.

1816- The first First Presbyterian Hilltop church of Mendham was replaced by the congregation.

1860- The fourth and present Hilltop church erected on its present site.

1913- The Rockaway Valley Railroad, which passed through the middle of Mendham Township, ceasedÂ operation.