From the New York Racing Association’s “History of the Game”

The Martin Luther King, Jr. Day feature at Aqueduct Racetrack is named for one of the all-time great riders, Jimmy Winkfield. The two-time Kentucky Derby winner’s 1902 victory aboard Alan-a-Dale made him the most recent African-American to win the Run for the Roses. His National Museum of Racing and Hall of Fame career took him to Russia, France, and Germany. All together, he won over 2,500 races before becoming a successful trainer.

The sport of horse racing is the only instance where the participation of blacks stopped almost completely while the sport itself continued—a sad commentary on American life…Isaac Murphy, so highly admired during his time for his skills and character, would have been ashamed of his sport.  –Arthur Ashe, quoted by Edward Hotaling in They’re Off! Horse Racing at Saratoga.

But at any race track in this country now, you’d have a hard time finding an African-American in the saddle.

In the early days of racing in this country, African-American faces were prominent. Slaves in the south grew up on farms, working in stables, and plantation owners wouldn’t hesitate to put their slaves on their horses’ backs in informal racing in the south. When racing became organized sport in the early 19thcentury, black boys and men were in the vanguard in the saddle, dominating racing until the turn of the century.

But as was the case with so many other segments of American life, racism pushed black jockeys out of the saddle – literally and figuratively – and by the early part of the 20th century, they had virtually disappeared from horses’ backs at America’s biggest racetracks. 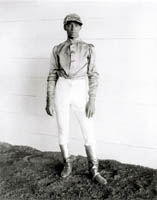 From the National Museum of Racing and Hall of Fame

Jimmy Winkfield was a black jockey who rose to national prominence with his riding skills; he won the Kentucky Derby in 1901 and 1902, the first jockey to win America’s most famous race back to back, and one of only five to ever accomplish that feat. But even he was not immune to the social forces that worked to marginalize African-Americans’ role in racing.

Winkfield got his start in Kentucky, but in 1900, he came to New York to try his hand here, at the nation’s most prestigious tracks.  The experiment didn’t last long.

As Joe Drape details in Black Maestro, his biography of Winkfield, the jockey’s skill was secondary to the color of his skin:

An Anti-Colored Union was in place, with the goal of running the black riders off the racetrack. It had begun earlier in the year at the Queens County track when the white jockeys…put the word out that if owners wanted to take home first-place purses, they’d best not ride the colored jockeys…Sometimes [the white jockeys] pocketed, or surrounded, a black jockey until they could ride him into and over the rail. Their whips found the thighs, hands, and face of the colored boy next to them more often than the horse they were riding. Every day a black rider ended up in the dirt; and every day racing officials looked the other way.

According to Drape, Winkfield only lasted a couple of weeks in New York. And within four years, he left the United States for Europe, where he became a celebrity on and off the track, marrying into Russian aristocracy.  His influence on American racing ended in 1904, the year that he left this country. He was 22 years old.

In 2004, Winkfield was inducted into the Racing Hall of Fame, and the following year, the New York Racing Association named a race in his honor, run each year on the Martin Luther King, Jr. holiday. In December 2004, NPR’s Tavis Smiley talked to John Lee, at the time director of broadcasting at NYRA, about the decision to name a race after Winkfield.

Lee: There had been an idea floating around that we really should name the stakes race we run on Martin Luther King, Jr. day for an African-American racing figure, and it had been a little bit on the back burner, and Jimmy Winkfield going into the Hall of Fame this year… helped push things along. And a key guy in moving it along was Coach COH -0.64% Mike Jarvis, formerly of St John’s…he’s also a member of our New York Racing Association board of trustees…He…put it on the agenda for the next board of trustees meeting. He got a very receptive hearing from the chairman of the board, Barry K. Schwartz, and starting in 2005, we have the Jimmy Winkfield Stakes.

The first Winkfield stakes was run on January 17, 2005, won by a horse named Maddy’s Lion. Later that year, Representative Bobby Rush of Illinois sponsored a resolution honoring Winkfield and celebrating “the significant contributions and excellence of African American jockeys and trainers in the sport of horse racing and in the history of the Kentucky Derby.” The release for the resolution is dated May 6, 2005, the day before the Kentucky Derby.

Winkfield died in 1974; a New York Times obituary by Gerald Eskenazi observed, “Only turf historians, or perhaps those who heard stories told by their grandfathers, would have recognized Winkfield’s name in the United States this decade.” And perhaps not even turf historians: Winkfield’s name doesn’t appear in the index of William H.P. Robertson’s A History of Thoroughbred Racing in America, a seminal volume of racing history in this country.

In a 1988 article on African-Americans in sport, Ashe called the story of black jockeys “the saddest case,” comparing the role of African-Americans in racing in the late 19th century to their “domination” in the NBA today.  And while acknowledgement of that role was for too long as invisible as African-Americans in the saddle over the last 100 years, a number of books in the last decade have explored, recorded, and honored the contributions of Murphy, Winkfield, and their contemporaries.

And at about 3:45 this afternoon, at Aqueduct Racetrack in Ozone Park in Queens, the Jimmy Winkfield Stakes will be run, the only race to be run today that will commemorate the contributions and accomplishments of African-Americans in racing.