You are here: Home / Education / Women Who Made History / Gwen Ifill dies at 61 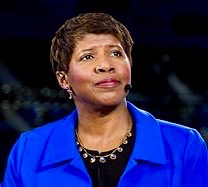 What Gwen Ifill meant to us

The news of Gwen Ifill’s death has left a void in the world of journalism and politics. Judy Woodruff and Hari Sreenivasan speak with a few of her friends and colleagues about her legacy and what made her so beloved. 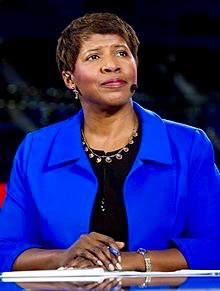 Ifill on PBS NewsHour at the Republican National Convention, August 2012

Gwendolyn L. “Gwen” Ifill (/ˈaɪfəl/; September 29, 1955 – November 14, 2016) was an American Peabody Award-winning journalist, television newscaster, and author. She was the moderator and managing editor of Washington Week and co-anchor and co-managing editor, with Judy Woodruff, of PBS NewsHour, both of which air on PBS. Ifill was a political analyst and moderated the 2004 and 2008 American vice-presidential debates. She was the author of the best-selling book The Breakthrough: Politics and Race in the Age of Obama.

Ifill was born in New York City, the fifth child of African Methodist Episcopal (AME) minister (Oliver) Urcille Ifill, Sr., a Panamanian of Barbadian descent who emigrated from Panama, and Eleanor Ifill, who was from Barbados. Her father’s ministry required the family to live in several cities in New England and on the Eastern Seaboard during her youth, where he pastored AME churches. As a child, she lived in Pennsylvania and Massachusetts church parsonages and in federally subsidized housing in Buffalo and New York City. She graduated in 1977 with a Bachelor of Arts in communications from Simmons College, in Boston, Massachusetts.

While at Simmons College, Ifill interned for the Boston Herald-American and was hired after graduation by editors deeply embarrassed by an incident during her internship in which a coworker wrote her a note that read, “Nigger go home.” Later she worked for the Baltimore Evening Sun (1981–84), the Washington Post (1984–91), the New York Times (1991–94), and NBC.

In October 1999, she became the moderator of the PBS program Washington Week in Review. She was also senior correspondent for PBS NewsHour. Ifill appeared on various news shows, including Meet the Press.

In November 2006, Ifill co-hosted Jamestown Live!, a educational webcast commemorating the 400th anniversary of Jamestown, Virginia. She served on the board of the Harvard Institute of Politics, the Committee to Protect Journalists, the Museum of Television and Radio, and the University of Maryland’s Philip Merrill College of Journalism. 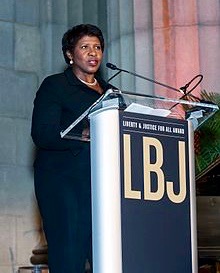 Ifill at the 2015 LBJ Liberty & Justice for All Award in Washington, D.C.

On October 5, 2004, Ifill moderated the vice-presidential debate between the Republican Vice President Dick Cheney and the Democratic candidate and U.S. Senator from North Carolina John Edwards. Howard Kurtz described the consensus that Ifill “acquitted herself well” as moderator.

Ifill also moderated the vice-presidential debate on October 2, 2008, between the Democratic U.S. Senator from Delaware Joe Biden and the Republican governor of Alaska, Sarah Palin, at Washington University, in St. Louis. The debate’s format offered Ifill freedom to cover domestic and international issues.

Before the 2008 debate, Ifill’s objectivity was questioned by conservative talk radio, blogs and cable news programs and some independent media analysts because of her book The Breakthrough, which was scheduled to be released on Inauguration Day 2009 but whose contents had not been disclosed to the debate commission or the campaigns. The book was mentioned in the Washington Times and appeared in trade catalogues as early as July 2008, well before Ifill was selected by the debate committee. Several analysts viewed Ifill’s book as creating a conflict of interest, including Kelly McBride of the Poynter Institute for Media Studies, who said, “Obviously the book will be much more valuable to her if Obama is elected.” John McCain, the Republican presidential nominee, said in an interview on Fox News Channel, “I think she will do a totally objective job because she is a highly respected professional.” Asked about the forthcoming book, McCain responded, “Does this help…if she has written a book that’s favorable to Senator Obama? Probably not. But I have confidence that Gwen Ifill will do a professional job.”

To critics, Ifill responded, “I’ve got a pretty long track record covering politics and news, so I’m not particularly worried that one-day blog chatter is going to destroy my reputation. The proof is in the pudding. They can watch the debate tomorrow night and make their own decisions about whether or not I’ve done my job.”

After the debate, Ifill received praise for her performance. The Boston Globe reported that she received “high marks for equal treatment of the candidates.”

Ifill’s moderation of the debates won her pop-culture recognition when the debates were parodied on Saturday Night Live, with Queen Latifah portraying Ifill. PBS ombudsman, Michael Getler, twice wrote about letters he received complaining of bias in Ifill’s news coverage. He dismissed complaints that Ifill appeared insufficiently enthusiastic about Sarah Palin’s speech at the 2008 Republican National Convention and concluded that Ifill had played a “solid, in my view, and central role in PBS coverage of both conventions.”