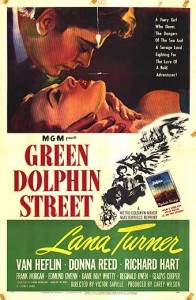 Green Dolphin Street is a 1947 historic drama film released by Metro-Goldwyn-Mayer and based on the novel by Elizabeth Goudge.

In the 1840’s, on an island in the English Channel, two sisters, Marguerite (Donna Reed) and Marianne Patourel (Lana Turner), daughters of the wealthy Octavius Patourel (Edmund Gwenn), fall in love with the same man, William Ozanne (Richard Hart). Having settled in New Zealand, William writes a letter to the family proposing marriage to one of the sisters. Because he is drunk, he mistakenly writes the name “Marianne” instead of “Marguerite” It is actually Marguerite that he loves and wants to marry. Marianne, believing he wants to marry her, decides to set off for New Zealand to be with her intended. 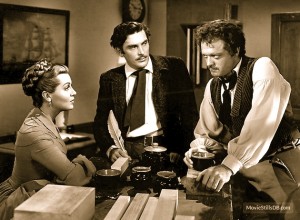 The film stars Lana Turner, Van Heflin, Donna Reed, and Richard Hart, and features a screenplay by Samson Raphaelson based on the historical novel Green Dolphin Street (1944) by Elizabeth Goudge. The film was directed by Victor Saville and produced by Carey Wilson.

Turner and Heflin reprised their roles in a Lux Radio Theatre version of Green Dolphin Street on 19 September 1949.

Hart and Heflin, who played romantic rivals in Green Dolphin Street, were similarly cast in B.F.’s Daughter (1948). Hart made only four feature films before his death at an early age, two of them co-starring Heflin. 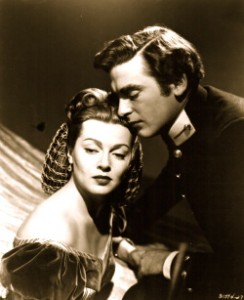 In 1948, the film won the Academy Award for Best Visual Effects, particularly for its depiction of a devastating earthquake. It was also nominated in the categories Cinematography (Black-and-White), Film Editing, Sound Recording (Douglas Shearer) and Special Effects. 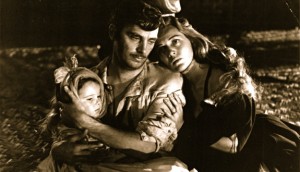