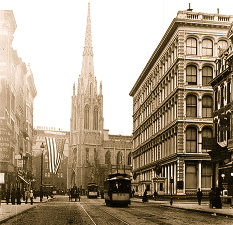 Grace Church is a historic parish church in Manhattan, New York City which is part of the Episcopal Diocese of New York. The church is located at 800-804 Broadway, at the corner of East 10th Street, where Broadway bends to the south-southeast, bringing it in alignment with the avenues in Manhattan’s grid. Grace Church School and the church houses – which are now used by the school – are located to the east at 86-98 Fourth Avenue between East 10th and 12th Streets.

The church, which has been called “one of the city’s greatest treasures,” is a French Gothic Revival masterpiece designed by James Renwick, Jr., his first major commission. Grace Church is a National Historic Landmark designated for its architectural significance and place within the history of New York City, and the entire complex is a New York City landmark, designated in 1966 (church and rectory) and 1977 (church houses). 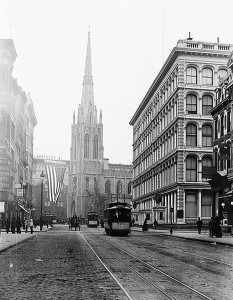 Grace Church was initially organized in 1808 at Broadway and Rector Street.  Under rector Thomas House Taylor, who began service at the church in 1834, the decision was made to move the church uptown with the city’s expanding population. In 1843, the land on which the church was built was purchased from Henry Brevoort. The 23-year-old architect James Renwick, Jr. – a nephew of Brevoort – whose sole completed work at the time was the Bowling Green Fountain, was commissioned as the architect.

The cornerstone for the new church was laid in 1843 and the church was consecrated in 1846. Grace Church was designed in the French Gothic Revival style out of Sing Sing marble, and vestry minutes from January of that year break down some of the expenses for building a new church – including items ranging from the cost of the workers from Sing Sing state prison who cut the stone to the cost of the embroidery for the altar cloth. The church originally had a wooden spire, but under the leadership of the rector at the time, Henry Codman Potter, it was replaced in 1881 with a marble spire designed by Renwick.  The interior of the church is primarily constructed from lath and plaster.

The east window over the high altar created by the English stained glass manufacturer Clayton and Bell in 1878, dominates the chancel, and the whole church; a “Te Deum” window, its theme is praise. The figures with their faces raised toward Christ, who is seated at the top center, represent prophets, apostles, martyrs and all the world. Other windows in the church are by Henry Holiday.  The reredos, with mosaic figures of the evangelists, is made of French and Italian Marble and Caen stone, and shows the four Gospel writers, Matthew, Mark, Luke and John, flanking the Risen Christ as he gives the great commission, “Go into all the world and make disciples…” This piece, along with the altar, was designed by Renwick and executed by Ellin & Kitson in 1878. The choir furniture was installed in 1903 after the chancel was lengthened an additional fifteen feet in a renovation designed by Heins and La Farge. On the lawn in front of Renwick’s Grace House (1880–1881), which connects the sancturary to his Rectory (1846–1847), stands a terra-cotta Roman urn dating from around the time of the Emperor Nero.

For a full generation after it was built it was the most fashionable church in New York: “For many years Grace has been the centre of fashionable New York”, Matthew Hale Smith observed in 1869: “To be married or buried within its walls has been ever considered the height of felicity.” 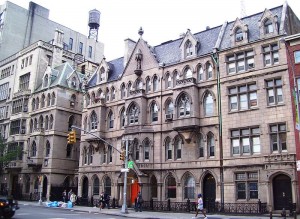 The church houses on Fourth Avenue, behind the church: Renwick’s Memorial House takes up the three bays in the center, with Clergy House by Heins & LaFarge to its left, and Neighborhood House to its right.
http://en.wikipedia.org/wiki/Grace_Church,_New_York

Edward T. Potter’s chantry was built in 1879, and added to in 1910 by William W. Renwick; this is the view from Broadway 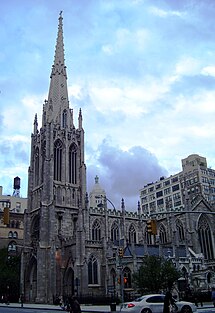 The Church at dusk