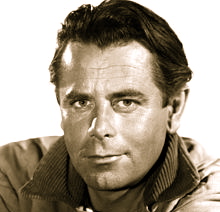 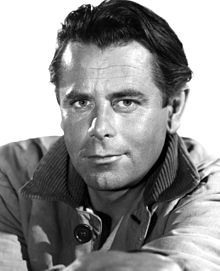 Glenn Ford was a Canadian-born American actor from Hollywood’s Golden Era with a career that lasted over fifty years. Despite his versatility, Ford was best known for playing ordinary men in unusual circumstances.

Born Gwyllyn Samuel Newton Ford at Jeffrey Hale Hospital in Quebec City, Ford was the son of Anglo-Quebecers Hannah Wood Mitchell and Newton Ford, a railway conductor.   Through his father, Glenn Ford was a great-nephew of Canada’s first Prime Minister Sir John A. Macdonald.   Ford moved to Santa Monica, California, with his family at the age of eight, and became a naturalized citizen of the United States in 1939.

After Ford graduated from Santa Monica High School, he began working in small theatre groups. Ford later commented that his railroad executive father had no objection to his growing interest in acting, but told him, “It’s all right for you to try to act, if you learn something else first. Be able to take a car apart and put it together. Be able to build a house, every bit of it. Then you’ll always have something.”   Ford heeded the advice and during the 1950s, when he was one of Hollywood’s most popular actors, he regularly worked on plumbing, wiring and air conditioning at home.   At times, he worked as a roofer and installer of plate-glass windows.

He acted in west coast stage companies, before joining Columbia Pictures in 1939. His stage name came from his father’s hometown of Glenford, Canada.   His first major movie part was in the 1939 film, Heaven with a Barbed Wire Fence.

Ford interrupted his film career to volunteer for duty in World War II with the United States Marine Corps Reserve on December 13, 1942. He was assigned in March 1943 to active duty at the Marine Corps Base in San Diego. He was sent to Marine Corps Schools Detachment (Photographic Section) in Quantico, Virginia, three months later, with orders as a motion-picture production technician. Promoted to sergeant, Ford returned to the San Diego base in February 1944 and was next assigned to the radio section of the Public Relations Office, Headquarters Company, Base Headquarters Battalion. There he staged and broadcast the radio program Halls of Montezuma. Ford was honorably discharged from the Marines on December 7, 1944 for duodenal ulcers that had him hospitalised for several months.

In 1958, he joined the U.S. Naval Reserve and was commissioned as a lieutenant commander and made a public affairs officer. During his annual training tours, he promoted the Navy through radio and television broadcasts, personal appearances, and documentary films. He was promoted to commander in 1963 and captain in 1968.

Ford went to Vietnam in 1967 for a month’s tour of duty as a location scout for combat scenes in a training film entitled Global Marine. He traveled with a combat camera crew from the demilitarized zone south to the Mekong Delta. For his service in Vietnam, the Navy awarded him a Navy Commendation Medal. His World War II decorations are as follows: American Campaign Medal, Asiatic-Pacific Campaign Medal, World War II Victory Medal, Rifle Marksman Badge, and the US Marine Corps Reserve Medal. He retired from the Naval Reserve in the 1970s at the rank of captain.

Following military service, Ford’s breakthrough role was in 1946, starring alongside Rita Hayworth in the noir classic Gilda.   The New York Times movie reviewer Bosley Crowther praised Ford’s “stamina and poise in a thankless role” despite the movie’s poor direction.   He went on to be a leading man opposite Hayworth in a total of five films.

Ford’s film career flourished in the 1950s and 1960s and continued into the 1980s with many television roles. His major roles in thrillers, dramas and action films include A Stolen Life with Bette Davis, The Secret of Convict Lake with Gene Tierney, The Big Heat, Blackboard Jungle, Framed, Interrupted Melody with Eleanor Parker, Experiment in Terror with Lee Remick, Four Horsemen of the Apocalypse and westerns such as The Fastest Gun Alive, 3:10 to Yuma and Cimarron. Ford’s versatility also allowed him to star in a number of popular comedies, such as The Teahouse of the August Moon, Don’t Go Near the Water, The Gazebo, Cry for Happy and The Courtship of Eddie’s Father.

In 1971, Ford signed with CBS to star in his first television series, a half hour comedy/drama titled The Glenn Ford Show. However, CBS head Fred Silverman noticed that many of the featured films being shown at a Glenn Ford film festival were westerns. He suggested doing a western series instead, which resulted in the “modern day western” series, Cade’s County. Ford played southwestern Sheriff Cade for one season (1971–1972) in a mix of western drama and police mystery. In The Family Holvak (1975–1976), Ford portrayed a depression era preacher in a family drama, reprising the same character he had played in the TV film, The Greatest Gift.

In 1978, Ford had a supporting role in Superman, as Clark Kent‘s adopted father, Jonathan Kent, a role that introduced Ford to a new generation of film audiences.  In Ford’s final scene in the film, “Rock Around the Clock“, the theme song from Blackboard Jungle, is heard on a car radio.

In 1981, Ford co-starred with Melissa Sue Anderson in the slasher film Happy Birthday to Me.

In 1991, Ford agreed to star in a cable network series, African Skies. However, prior to the start of the series, he developed blood clots in his legs which required a lengthy stay in Cedars-Sinai Medical Center. Eventually he recovered, but at one time his situation was so severe that he was listed in critical condition. Ford was forced to drop out of the series and was replaced byRobert Mitchum.

The 2006 movie Superman Returns includes a scene where Ma Kent (played by Eva Marie Saint) stands next to the living room mantel after Superman returns from his quest to find remnants of Krypton. On that mantel is a picture of Glenn Ford as Pa Kent. 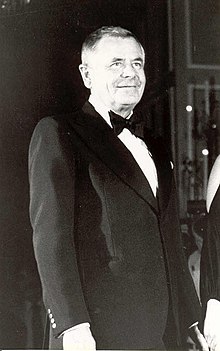 Ford’s first wife was actress and dancer Eleanor Powell (1943–1959), with whom he had his only child, Peter (born 1945). The couple appeared together on screen just once, in a short subject produced in the 1950’s entitled The Faith of Our Children; when they married, Powell was more famous than Ford. Ford subsequently married actress Kathryn Hays (1966–1969); Cynthia Hayward (1977–1984) and Jeanne Baus (1993–1994). All four marriages ended in divorce. Ford was not on good terms with his ex-wives, except for Cynthia Hayward with whom he remained close until his death. He also had a long-term relationship with actress Hope Lange in the early 1960’s, although they never married.

For the first half of his life, Glenn Ford supported the US Democratic Party – in the 1950s he supported Adlai Stevenson for President – and in later years became a supporter of the Republican Party, campaigning for his friend Ronald Reagan in the 1980 and 1984 presidential elections.

Ford attempted to purchase the Atlanta Flames in May 1980 with the intention of keeping the team in the city. He was prepared to match a $14 million offer made by Byron and Daryl Seaman, but was outbid by an investment group led by Nelson Skalbania and included the Seaman brothers which acquired the franchise for $16 million on May 23 and eventually moved it to Calgary.

He lived in Beverly Hills, California, where he illegally raised 140 leghorn chickens, until he was stopped by the Beverly Hills Police Department.

Ford suffered a series of minor strokes which left him in frail health in the years leading up to his death. He died in his Beverly Hills home on August 30, 2006, at the age of 90.

He was interred in Woodlawn Cemetery, located in Santa Monica.