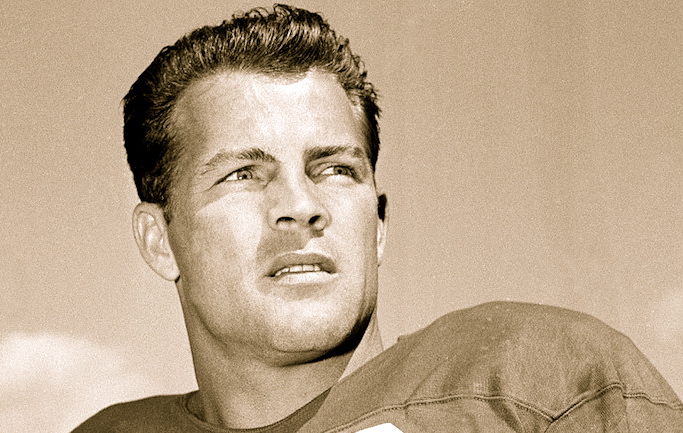 Pro Football Hall of Famer and renown broadcaster Frank Gifford has passed away at the age of 84. See some of his best moments as a player and commentator here.

Gifford at a book signing of Glory Game in Huntington, New York, in 2009

Francis Newton “Frank” Gifford (August 16, 1930 – August 9, 2015) was an American football player and television sportscaster. He spent his entire 13-year NFL career with the New York Giants, playing both offense and defense. He participated in five NFL Championship games and eight Pro Bowls, and won the leagues’s Most Valuable Player Award in 1956, the same season he won his only NFL Championship, In 1977, he was inducted into the Pro Football Hall of Fame. After retiring from the NFL in 1964, Gifford later became a commentator and play-by-play announcer for NFL games on CBS and most notably on ABC’s Monday Night Football.

Gifford was married to television host Kathie Lee Gifford from 1986 until his death.

Gifford was born in Santa Monica, California, the son of Lola Mae (née Hawkins) and Weldon Gifford, an oil driller.

After graduating from Bakersfield High School, Gifford was unable to gain an athletic scholarship to the University of Southern California (USC) due to his low grade point average. Undeterred, he played a season for Bakersfield Junior College, making the Junior College All-American team while making the grades needed to enroll at USC. 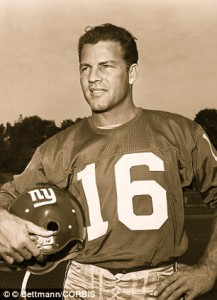 He began his NFL career with the New York Giants by playing both offense and defense. He made eight Pro Bowl appearances and had five trips to the NFL Championship Game. Gifford’s biggest season may have been 1956, when he won the Most Valuable Player award of the NFL, and led the Giants to the NFL title over the Chicago Bears.

He lost 18 months in the prime of his career when he was laid out by a hard tackle. During a 1960 game against the Philadelphia Eagles, he was knocked out by Chuck Bednarik on a passing play, suffering a severe head injury that led him to retire from football in 1961. However, Gifford returned to the Giants in 1962, changing positions from running back to wide receiver (then known as flanker).

His Pro Bowl selections came at three different positions—defensive back, running back, and wide receiver. He retired again, this time for good, in 1964, after making the Pro Bowl as a receiver.

Gifford was inducted into the Pro Football Hall of Fame on July 30, 1977. 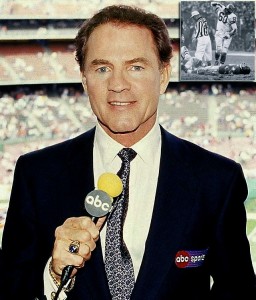 After his playing days ended, Gifford became a commentator mainly for NFL games on CBS. His big break came in 1971 when he replaced Keith Jackson as play-by-play announcer on ABC’s Monday Night Football, joining Howard Cosell and Don Meredith, and would continue on as a commentator until 1997. A controversy over an affair with airline stewardess Suzen Johnson resulted in a reduced role on the pregame show in 1998, after which Gifford left Monday Night Football. During the 1980’s, Gifford would fill in for Al Michaels (who had replaced Gifford on play-by-play in 1986) on play-by-play whenever Michaels went on baseball assignments for the League Championship Series (1986 and 1988) or World Series (1987 and 1989). Gifford was also host of British TV network Channel 4’s NFL coverage with British born former New England Patriots kicker John Smith in 1986-1987. 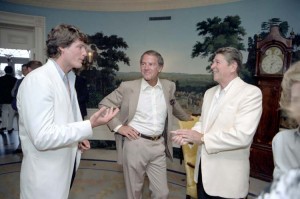 Gifford also served as a reporter and commentator on other ABC programs, such as their coverage of the Olympic Games (perhaps most notably, the controversial men’s basketball Gold Medal game between the United States and Soviet Union at the 1972 Summer Olympics in Munich), skiing, and golf, and has guest hosted Good Morning America on occasion. He met his wife Kathie Lee while filling in as GMA host.

He announced Evel Knievel’s jumps for ABC’s Wide World of Sports in the 1970’s, including when Knievel failed to clear 13 buses at Wembley Stadium in 1975.

In 1977, Gifford won an Emmy Award for Outstanding Sports Personality.

In 1995, he was given the Pete Rozelle Award by the Pro Football Hall of Fame for his NFL television work.

Gifford appeared as himself as a guest star on the NBC television series, Hazel, in the episode, “Hazel and the Halfback”, which originally aired December 26, 1963. In the story, Gifford is interested in investing in a local bowling alley. In 1977, Gifford appeared as himself in the episode “The Shortest Yard” of the ABC sitcom The San Pedro Beach Bums. Gifford and his wife Kathie Lee appeared in the February 28, 1995, episode of the ABC sitcom Coach, titled “The Day I Met Frank Gifford”, in which a character on the show plots to meet the former football star who will attend an event to receive an award. 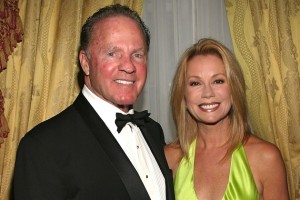 Gifford and his wife, television host Kathie Lee Gifford, were married on October 18, 1986, and lived in Greenwich, Connecticut, with their son and daughter, Cody Newton Gifford (b. March 22, 1990) and Cassidy Erin Gifford (b. August 2, 1993). The couple shared a birthday, August 16. They appeared together as hosts for the 1988 Winter Olympics in Calgary. Gifford and his first wife, Maxine Avis Ewart, have three children, Jeff, Kyle and Victoria, and five grandchildren. Victoria married Michael LeMoyne Kennedy, a member of the Kennedy Family. Gifford has an older sister and younger brother, Winona and Waine.

In 1997, The Globe arranged to have Gifford secretly videotaped being seduced by former flight attendant Suzen Johnson in a New York City hotel room. They published photos and stories. ESPN reported that the tabloid paid Johnson $75,000 to lure Gifford to the room, while The Atlantic said it was $125,000.

According to the former lawyer of Johnny Carson, Henry Bushkin, Gifford had an affair with Carson’s wife Joanne.

On August 9, 2015, Gifford died from natural causes at his home in Greenwich, Connecticut, at the age of 84. 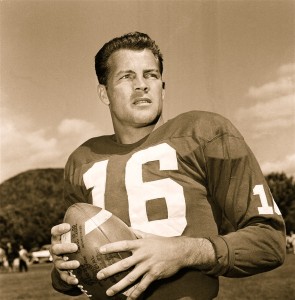 Frank Gifford is a character in Frederick Exley’s novel A Fan’s Notes. In the novel, Gifford becomes the narrator’s hero while both are at USC. Subsequently, the narrator continues to be an intense fan of Gifford and his team, the New York Giants, during his NFL career.