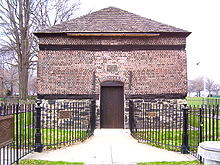 The Fort Pitt Museum, located in historic Point State Park in downtown Pittsburgh, is a two-floor, 12,000 square foot museum that tells the story of Western Pennsylvania’s pivotal role during the French & Indian War, the American Revolution, and as the birthplace of Pittsburgh.

First opened in 1969 in a reconstructed bastion, the Fort Pitt Museum reconstructs Pittsburgh’s early history through a variety of interactive stations, life-like museum figures, and artifacts. Three recreated rooms detail life inside the Fort during the 1750’s, and include a fur trader’s cabin, a casemate storage room for munitions, and a British soldiers’ barrack.

Artifacts at the Fort Pitt Museum include an American Indian powderhorn featuring an underwater panther; items from General Braddock’s expedition such as musket balls and rifle locks; General Lafayette’s 1758 six-pounder cannon marked “La Embushcade” (the ambusher); and a pewter writing desk inscribed with “Fort Pitt Provincial Store, 1761” that belonged to Josiah Davenport, who was Ben Franklin’s nephew and a local fur trader.

The DAR, or Daughters of the American Revolution, owns the Fort Pitt Block House, which adjoins the Fort Pitt Museum. Built in 1764, it is the only surviving structure of the original Fort Pitt, and is not only the oldest building in Pittsburgh, but also the oldest west of the Allegheny Mountains.

The tiny blockhouse, which once provided quick cover for people caught outside Fort Pitt when it came under attack, was converted to a residence in 1785 and served as a dwelling until 1894 when it was gifted to the Pittsburgh Chapter of the DAR by Mary Schenley. The Block House is not part of the Fort Pitt Museum; it is a self-supporting, privately-owned museum with no admission fee.