You are here: Home / Fire Fighter / Firefighting in the U.S.

Firefighting in the U.S. 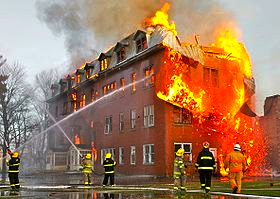 Firefighting in the Horse-Drawn Era: Getting There

This is one of approximately 30 short videos produced by the Aurora Regional Fire Museum for their exhibit “Getting There • Getting Water • Getting Rescued 150 years of the tools and technology used to fight fires and save lives.

In 1631 Boston‘s governor John Winthrop outlawed wooden chimneys and thatched roofs  In 1648, the New Amsterdam governor Peter Stuyvesant appointed four men to act as fire wardens.  They were empowered to inspect all chimneys and to fine any violators of the rules. The city burghers later appointed eight prominent citizens to the “Rattle Watch” – these men volunteered to patrol the streets at night carrying large wooden rattles.  If a fire was seen, the men spun the rattles, then directed the responding citizens to form bucket brigades. On January 27, 1678 the first fire engine company went into service with its captain (foreman) Thomas Atkins.  In 1736 Benjamin Franklin established the Union Fire Company in Philadelphia.

George Washington was a volunteer firefighter in Alexandria, Virginia. In 1774, as a member of the Friendship Veterans Fire Engine Company, he bought a new fire engine and gave it to the town, which was its very first.  However the United States did not have government-run fire departments until around the time of the American Civil War. Prior to this time, private fire brigades compete with one another to be the first to respond to a fire because insurance companies paid brigades to save buildings.  Underwriters also employed their own Salvage Corps in some cities. The first known female firefighter Molly Williams took her place with the men on the dragropes during the blizzard of 1818 and pulled the pumper to the fire through the deep snow.

Fire houses were a sort of social gathering place rather than a place where professionals would meet, and the money paid to the brigade went into the house’s fund rather than to individual members. 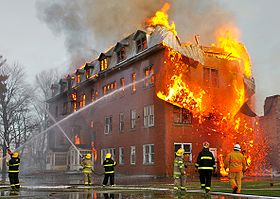 Firefighters at a major fire involving an abandoned convent in Canada, 2006.

Firefighting is the act of extinguishing fires. A firefighter fights fires to prevent loss of life, and/or destruction of property and the environment. Firefighting is a highly technical skill that requires professionals who have spent years training in both general firefighting techniques and specialized areas of expertise. 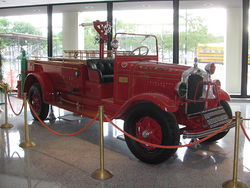 The Chicago Fire Department used this White Motor Company truck from 1930 to 1941.