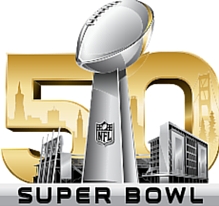 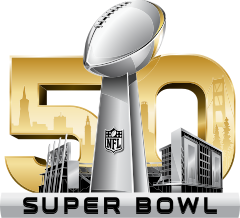 Super Bowl 50 was an American football game to determine the champion of the National Football League (NFL) for the 2015 season. The American Football Conference (AFC) champion Denver Broncos defeated the National Football Conference (NFC) champion Carolina Panthers 24–10 to earn their third Super Bowl title. The game was played on February 7, 2016, at Levi’s Stadium in the San Francisco Bay Area at Santa Clara, California. As this was the 50th Super Bowl, the league emphasized the “golden anniversary” with various gold-themed initiatives, as well as temporarily suspending the tradition of naming each Super Bowl game with Roman numerals (under which the game would have been known as “Super Bowl L”), so that the logo could prominently feature the Arabic numerals 50. 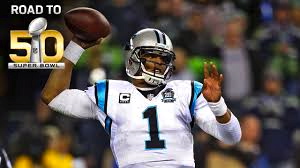 The Panthers finished the regular season with a 15–1 record, racking up the league’s top offense, and quarterback Cam Newton was named the NFL Most Valuable Player (MVP). They defeated the Arizona Cardinals 49–15 in the NFC Championship Game and advanced to their second Super Bowl appearance since the franchise was founded in 1995. The Broncos finished the regular season with a 12–4 record, thanks to having the league’s top defense despite the struggles of starting quarterback Peyton Manning, and defeated the defending Super Bowl champion New England Patriots 20–18 in the AFC Championship Game. They joined the Patriots, Dallas Cowboys, and Pittsburgh Steelers as one of four teams that have made eight appearances in the Super Bowl. 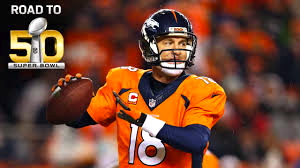 The Broncos took an early lead in Super Bowl 50 and never trailed. Newton was limited by Denver’s defense, which registered seven sacks and forced him into three turnovers, including a fumble which they recovered for a touchdown. Carolina’s defense kept the game close by holding Denver’s offense without a touchdown until late in the fourth quarter; defensive end Kony Ealy became the first player in Super Bowl history to have an interception and three sacks. Denver linebacker Von Miller was named Super Bowl MVP; Miller recorded five solo tackles, 2½ sacks, and two forced fumbles in the game.