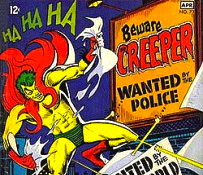 This week we take a look at one of DC’s more obscure heroes, the Creeper! 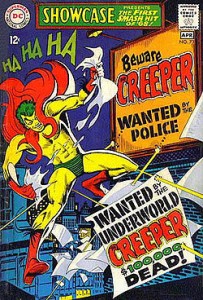 The Creeper is a fictional character, a superhero who appears in comic books published by DC Comics. Created by Steve Ditko, he first appeared in Showcase #73 (March 1968).

Following his debut in Showcase, the Creeper was given his own series Beware the Creeper, written by Dennis O’Neil; Steve Ditko plotted the first issue. It lasted six issues. Most pitted him against a chameleonic villain called Proteus, whose true identity was revealed just before his violent death in the final issue. The character’s reappearance in Super-Team Family #2 in 1975/76 is unexplained, and his briefly described origin does not match the one given initially.  Shortly after his last solo issue, the Creeper teamed with Batman in The Brave and the Bold #80 (Nov. 1968), then guested in Justice League of America #70 (March 1969), where it was asked whether the Creeper was an outlaw. He also appeared with Batman in Detective Comics #418 (Dec. 1971). After the origin was reprinted in Detective Comics #443 (Nov. 1974), one of the “DC 100 Page Super Spectacular” series, Ryder was shown working as a news anchor on Gotham City television in issue #445 (March 1975), and in #447-448 (May–June 1975) became the Creeper again to help Batman escape a frame-up for murder. 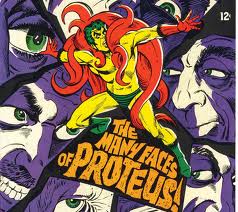 DC kept the character active with sporadic solo runs and guest shots over the next few years. He turned up almost immediately in issue #3 (Oct. 1975) of the Joker’s short-lived, self-titled series, in a story written by O’Neil, where the similarity in green hair and maniacal laugh caused confusion. This was followed with a one-off solo story in 1st Issue Special #7 (Oct. 1975), penciledby creator Steve Ditko. Other appearances in this period included team-ups with Wildcat in Super-Team Family #2 (Jan. 1976), again written by O’Neil; with Batman in The Brave and the Bold #143 (Oct. 1978) and #178 (Sept. 1981); and with many fellow alumni (and a few non-graduates) of Showcase in that comic’s 100th issue (May 1978). A story intended for the never-publishedShowcase #106 in 1978 (written and drawn by Ditko and which would be included in Cancelled Comic Cavalcade #2) was included in The Creeper by Steve Ditko hardcover collection published by DC in 2010.  Among further solos were backup series in Adventure Comics #445-447 (1976), World’s Finest Comics #249-55 (1978–1979, written and fully drawn by Ditko), and The Flash#318-323 (1983).

Beginning in a team-up with Superman in DC Comics Presents #88 (Dec. 1985), written by Steve Englehart) during the “Crisis on Infinite Earths” company-wide story arc, the Creeper’s depiction changed under different writers, which included a revised origin that was referenced but never wholly revealed. His deranged behavior, initially an act to frighten criminals, transformed into genuine, narcotics-induced psychotic behavior. In addition, Ryder could access his enhanced physical abilities only in his costumed form, and could no longer control his transformations. The new version came into focus when the Creeper teamed with the Justice League International in 1987. A decade later, DC gave the Creeper another chance in a solo comic, The Creeper. It lasted 12 issues ((Dec. 1997 – Nov. 1998, including the “DC One Million” special numbering.  Writer Len Kaminski focused on the breakdown of Ryder’s sanity under the influence of the Creeper and made many references to previous continuity.

The Creeper starred in a six-issue miniseries, The Creeper vol. 2 (Oct. 2006 – March 2007), written by Steve Niles and drawn by Justiniano. 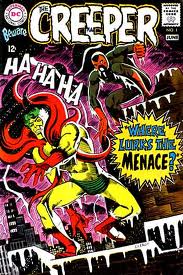 Jack Ryder is a former Gotham City television talk show host fired due to his outspoken nature. Finding employment in network security, he attempts to rescue a scientist named Dr. Yatz whom mobsters have kidnapped in order to obtain his newest discoveries. The chief mobster hosts a masquerade party at his mansion. To gain entry, Ryder improvises a costume from yellow tights and facial make-up designed to look like skin, a green wig and trunks, and red gloves, boots, and furry cloak. Ryder locates Yatz inside, but the mobsters detect him and open fire, wounding Ryder. Yatz injects Ryder with a serum and implants a device in his wound. The serum confers the power to almost instantly heal any wound and grants Ryder enhanced strength and agility. The device, used with its activator, causes the costume to disappear, leaving Ryder naked. Yatz inadvertently leaves the activator out of the wound, but does not realize this until after the wound had healed. At this point, the mobsters find their victims again, this time killing Yatz. Ryder discovers that with the activator, he can regain the wild costume whenever he wishes. With it, a crazy laugh and his enhanced physical abilities, he has no trouble routing the crooks.

The eventual revision of The Creeper’s origin eliminated the serum and claims that the scientist surgically implanted two devices (some accounts claim a single device with two effects) that enhance Ryder’s physical abilities and can recreate an object whose “imprint” is stored in its circuitry. The scientist performs this surgery to save Ryder’s life after criminals he was investigating attacked and drugged him. Because the scientist is unaware of the drugs in Ryder’s system he inadvertently recorded their “imprint” at the same time he recorded the “imprint” of the costume. Thus the device that recreates Ryder’s costume when he becomes The Creeper also recreates the drugs in his system, explaining the Creeper’s odd personality. These drugs so overwhelm Ryder’s system that their effect becomes cumulative and the Creeper gradually becomes more irrational. When the Creeper changes back to Jack Ryder, the drugs disappear and with them, the psychosis. Eventually, Ryder comes to believe that he and the Creeper are two entirely different people instead of two roles played by the same man; he also holds this belief in his Creeper persona, which becomes increasingly disdainful of “Jack Ryder.” The Creeper once regained his rationality while bound by Wonder Woman‘s magic lasso, but the implications of this have never been explored. In Outsiders Bruce Wayne The Road Home it is revealed that he once dated Vicki Vale. 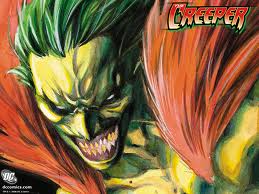 The Creeper appeared in the Eclipso: The Darkness Within annuals in 1992, tricked into taking up one of Eclipso‘s dark crystals, putting him under Eclipso’s control. He is later freed by Bruce Gordon, a longtime adversary of Eclipso. In the self-titled Eclipso comic book series, the Creeper, Gordon and his wife Mona make an initial foray into the South American territory that Eclipso has conquered. This leads to an Eclipso-possessed peasant throwing the Creeper (and himself) off a cliff. The peasant is mentally abandoned and both are left to plunge to their deaths. The intervention of a stunt squad saves the lives of both men. Several other heroes join in the fight against Eclipso, including Major Victory, the original Steel, Amanda Waller, and Wildcat. They form a team called the Shadow Fighters. In issue #13 of Eclipso, a portion of the Fighters, including the Creeper, make another trip into Eclipso’s territory. Several hyenas, possessed by Eclipso, track down the Creeper and tear him to shreds. Most of the infiltration team is slain; only small parts of the Creeper are actually recovered. The remains, along with the other dead heroes, are stolen out from under Eclipso’s control by surviving Shadow Fighters.

Despite this death, a Creeper series was launched in 1997. There are indications in this comic that the Dr. Yatz origin as detailed in previous appearances is somehow false and that the Creeper’s actual origins are in some way related to his longtime villain, Proteus. Before this was fully explored, however, the series ceased publication.