You are here: Home / Contributing Writers / E-Books / Coming Out Under Fire

Coming Out Under Fire 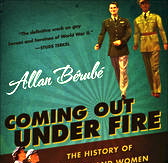 Short newsreel showing what soldiers do on their gay day off. 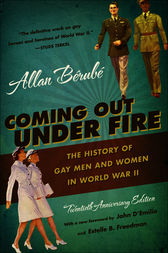 Coming Out Under Fire: The History of Gay Men and Women in World War II Allan Berube

During World War II, as the United States called on its citizens to serve in unprecedented numbers, the presence of gay Americans in the armed forces increasingly conflicted with the expanding antihomosexual policies and procedures of the military. In Coming Out Under Fire, Allan Berube examines in depth and detail these social and political confrontations—not as a story of how the military victimized homosexuals, but as a story of how a dynamic power relationship developed between gay citizens and their government, transforming them both. Drawing on GIs’ wartime letters, extensive interviews with gay veterans, and declassified military documents, Berube thoughtfully constructs a startling history of the two wars gay military men and women fought—one for America and another as homosexuals within the military.

Berube’s book, the inspiration for the 1995 Peabody Award-winning documentary film of the same name, has become a classic since it was published in 1990, just three years prior to the controversial “don’t ask, don’t tell” policy, which has continued to serve as an uneasy compromise between gays and the military. With a new foreword by historians John D’Emilio and Estelle B. Freedman, this book remains a valuable contribution to the history of World War II, as well as to the ongoing debate regarding the role of gays in the U.S. military.