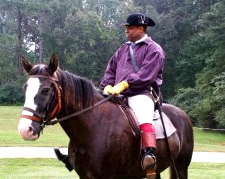 When the Revolution broke out Tye was one of many New Jersey slaves who were agricultural laborers and lived independently in small cabins. In Monmouth County, unrest among enslaved people prompted the county’s white leaders to argue against manumission and slaves being out at night. They also confiscated arms from both free blacks and slaves. This may have prompted Tye to run off. As a Loyalist freedman, what others called a runaway slave, he turned to raid warfare as a way of making a living.

Titus Cornelius, also known as Titus, Tye, and famously as Colonel Tye (c. 1753 – 1780), was a slave of African descent in the Province of New Jersey who fought as a Black Loyalistduring the American Revolutionary War; he was known for his leadership and fighting skills. He fought with a volunteer corps of escaped Virginia Colony slaves in the Ethiopian Regiment and the “Black Brigade” associators. Tye died from tetanus and lockjaw from a musket wound in the wrist following a short siege in September 1780 against Captain Joshua Huddy. Tye was one of the most feared and effective guerrilla leaders opposing the American patriot forces in central New Jersey.

Colonel Tye, the most feared and respected guerrilla commander of the Revolution, was one of the many enslaved Africans who escaped and fought for the British.

Known in his youth as Titus, he was one of four young men owned by John Corlies of Shrewsbury, in the eastern part of Monmouth County, New Jersey. Shrewsbury Quakers, under increasing pressure from their Philadelphia-influenced counterparts to the west, finally began to end slavery among themselves in the 1760s. Corlies did not follow the local practice of educating his slaves or of freeing them on their 21st birthdays, and by 1775, he was one of the few remaining Quaker slaveholders in Monmouth County.

In November 1775, the day after Dunmore’s Proclamation was issued, 22-year old Titus fled from his cruel, quick-tempered master, joining the flood of Monmouth County blacks who sought refuge with the British as soldiers, sailors and workers. Titus changed his name, gaining notoriety three years later as Captain Tye, the pride of Dunmore’s Ethiopian Regiment.

While not formally commissioning black officers, the British army often bestowed titles out of respect, and Tye quickly earned their respect. In his first known military incursion, the June, 1778 Battle of Monmouth (in which not a single black from the county fought for the patriots), Tye captured a captain in the Monmouth militia.

In July, 1779, Tye’s band launched a raid on Shrewsbury, and carried away clothing, furniture, horses, cattle, and two of the town’s inhabitants. With his “motley crew” of blacks and white refugees known as “cow-boys,” Tye continued to attack and plunder patriot homes, using his knowledge of Monmouth County’s swamps, rivers and inlets to strike suddenly and disappear quickly. These raids, often aimed at former masters and their friends, were a combination of banditry, reprisal, and commission; Tye and his men were well-paid by the British, sometimes earning five gold guineas.

During the harsh winter of 1779, Tye was among an elite group of twenty-four black Loyalists, known as the Black Brigade, who joined with the Queen’s Rangers, a British guerrilla unit, to protect New York City and to conduct raids for food and fuel. To learn more go to the link below: