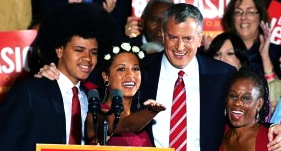 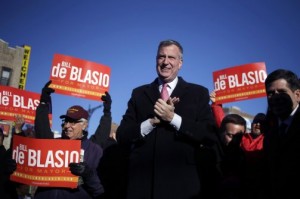 Bill de Blasio will be the first Democrat in two decades to serve as the mayor of New York City, defeating Republican Joe Lhota, a longtime adviser to former Mayor Rudy Giuliani, for the job.

Considering his huge margin of victory — de Blasio, the public advocate, was trouncing Lhota 73 percent to 24 percent with 99 percent of precincts reporting, according to The Associated Press early Wednesday — it wasn’t always such a sure road for de Blasio.

In the spring, de Blasio was in fourth place in a crowded Democratic primary race that included former Rep. Anthony Weiner, D-N.Y., who resigned from Congress in disgrace after it was discovered he sent lewd photos and messages to women he met online, and City Council Speaker Christine Quinn, who would have been the city’s first female and lesbian mayor.

Weiner led the race until late July when the news came out that Weiner had engaged in an additional three online sexual relationships since leaving Congress, which caused his poll numbers to take a hit. Quinn suffered from her ties to Mayor Michael Bloomberg, including her role in changing New York’s two-term limit, which allowed both herself and Bloomberg to seek a third term. 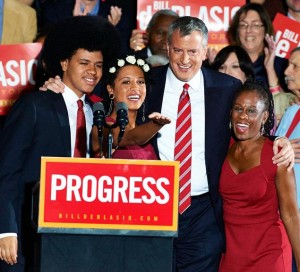 But it wasn’t until August that de Blasio hit upon the winning strategy: making his mixed-race family, and in particular his children, the public face of his campaign. It started with an ad starring his teenage son Dante, who, sporting a large afro, praised his father’s positions on affordable housing and New York’s controversial stop-and-frisk policy.

With his solidly liberal agenda, including opposition to stop-and-frisk, and pledge to raise taxes in order to pay for universal pre-kindergarten, de Blasio has promised voters a departure from the 12-year-long Bloomberg era. In particular, he stressed a desire to narrow New York’s widening gap between the haves and the have-nots. 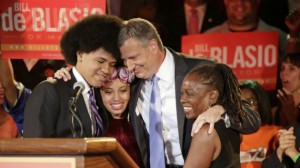 The Quinnipiac poll showed that voters are divided on whether he’ll be able to keep his campaign promises. Forty-two percent say yes; 43 percent say no.

Lhota, who served several positions in the Giuliani administration and was recently the head of the Metropolitan Transit Authority during superstorm Sandy, has suggested that de Blasio’s policies won’t be able to keep crime down and that he has insufficient experience. But his similarity to Bloomberg offered too little change for voters seeking a fresh face in Gracie Mansion. © 2013 CBS Interactive Inc. All Rights Reserved, By Rebecca Kaplan, CBS NEWS on November 6, 2013, 8:40 AM