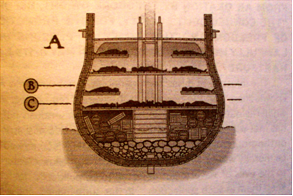 Arthur Hanse had sold a slave to Gershow Lee of Hunterdon County for the sum of $500 pounds, good, lawful proclamation money, according to a the document.  The slave, who is never referred to by the name, died just a few months after he was sold to Lee.  The Hunterdon County man sought compensation from Hanse, who evidently balked at that suggestion, according to the legal brief.  To settle the matter, both Hanse and Gershon agreed to let a Judge settle the issue, as stipulated in the document.  It is signed by Hanse and Lee, and the Judge, Peter Wycof.

This is one chilling reminders of selling of slaves, and the slave trade between the Colonies and Africa.  Ship manifests that list slaves as cargo, cast ion leg braces that shackled the slaves below decks during the harrowing voyage across the Atlantic Ocean, runaway slave notices, and books and newspaper stories that offered first hand accounts of slavery in America.