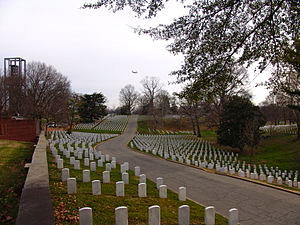 Voices From The Tomb 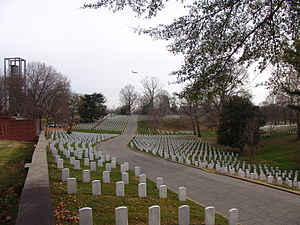 Arlington National Cemetery and the Netherlands Carillon in December 2012.

Arlington National Cemetery, in Arlington County, Virginia, directly across the Potomac River from the Lincoln Memorial, is a United States military cemetery beneath whose 624 acres (253 ha) have been laid casualties, and deceased veterans, of the nation’s conflicts beginning with the American Civil War, as well as reinterred dead from earlier wars. It was established during the Civil War on the grounds of Arlington House, which had been the estate of the family of Confederate general Robert E. Lee’s wife Mary Anna (Custis) Lee (a great-granddaughter of Martha Washington). The cemetery, along with Arlington House, Memorial Drive, the Hemicycle, and the Arlington Memorial Bridge, form the Arlington National Cemetery Historic District, listed on the National Register of Historic Places in April 2014. 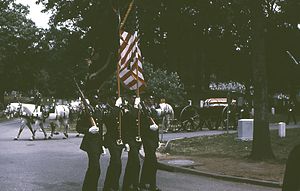 George Washington Parke Custis, grandson of Martha Washington, acquired the land that now is Arlington National Cemetery in 1802, and began construction of Arlington House. The estate passed to Custis’ daughter, Mary Anna, who had married United States Army officer Robert E. Lee. Custis’ will gave a “life inheritance” to Mary Lee, allowing her to live at and run Arlington Estate for the rest of her life but not enabling her to sell any portion of it. Upon her death, the Arlington estate passed to her eldest son, George Washington Custis Lee. 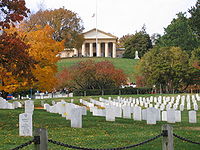 When Virginia seceded from the Union at the start of the American Civil War, Robert E. Lee resigned his commission on April 20, 1861, and took command of the armed forces of the Commonwealth of Virginia, later becoming commander of the Army of Northern Virginia. On May 7, troops of the Virginia militia occupied Arlington and Arlington House. With Confederate forces occupying Arlington’s high ground, the capital of the Union was left in an untenable military position. Although unwilling to leave Arlington House, Mary Lee believed her estate would soon be invested with federal soldiers. So she buried many of her family treasures on the grounds and left for her sister’s estate at Ravensworth in Fairfax County, Virginia, on May 14. On May 3, General Winfield Scott ordered Brigadier General Irvin McDowell to clear Arlington and the city of Alexandria, Virginia, of all troops not loyal to the United States. McDowell occupied Arlington without opposition on May 24.

At the outbreak of the Civil War, most military personnel who died in battle near Washington, D.C., were buried at the United States Soldiers’ Cemetery in Washington, D.C., or Alexandria Cemetery in Alexandria, Virginia, but by late 1863 both were nearly full. On July 16, 1862, Congress passed legislation authorizing the U.S. federal government to purchase land for national cemeteries for military dead, and put the U.S. Army Quartermaster General in charge of this program. In May 1864, Union forces suffered large numbers of dead in the Battle of the Wilderness. Quartermaster General Montgomery C. Meigs ordered that an examination of eligible sites be made for the establishment for a large new national military cemetery. Within weeks, his staff reported that Arlington Estate was the most suitable property in the area. The property was high and free from floods (which might unearth graves), it had a view of the District of Columbia, and it was aesthetically pleasing. It was also the home of the leader of the armed forces of the Confederate States of America, and denying Robert E. Lee use of his home after the war was a valuable political consideration. The first military burial at Arlington (a white soldier, William Henry Christman) was made on May 13, 1864. Close to what is now the northeast gate in Section 27. However, Meigs did not formally authorize establishment of burials until June 15, 1864. The date or name of the first African American burial cannot be precisely determined, but occurred on either July 2 or July 3, 1864, in Section 27. Arlington did not desegregate its burial practices until President Harry S. Truman issued Executive Order 9981 on July 26, 1948. 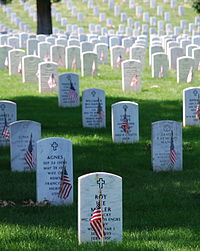 Gravestones at Arlington National Cemetery are marked by U.S. flags each Memorial Day.

The government acquired Arlington at a tax sale in 1864 for $26,800, equal to $400,000 today.[19] Mrs. Lee had not appeared in person but rather had sent an agent, attempting to pay the $92.07 in property taxes (equal to $1,400 today) assessed on the estate in a timely manner. The government turned away her agent, refusing to accept the tendered payment. In 1874, Custis Lee, heir under his grandfather’s will passing the estate in trust to his mother, sued the United States claiming ownership of Arlington. In December, 1882, the U.S. Supreme Court ruled 5-4 in Lee’s favor in United States v. Lee, deciding that Arlington had been confiscated without due process. After that decision, Congress returned the estate to him, and on March 3, 1883, Custis Lee sold it back to the government for $150,000 (equal to $3,221,364 in 2014) at a signing ceremony with Secretary of War Robert Todd Lincoln.

The southern portion of the land now occupied by the cemetery was used during and after the Civil War as a settlement for freed slaves. More than 1,100 freed slaves were given land at Freedman’s Village by the government, where they farmed and lived during and after the Civil War. They were evicted in 1888 when the estate was repurchased by the government and dedicated as a military installation.

Beginning in 1992, Morill Worcester donated thousands of wreaths around the end-of-year holiday season to be placed on graves at Arlington. He has since expanded his effort, now known as Wreaths Across America, and supplies wreaths to over 230 state and national cemeteries and veterans monuments across the country.

With limited space but large numbers of World War II, Korean War, Vietnam War, and other veterans dying and wanting to be buried at Arlington, the need for additional burial space at the cemetery became a pressing issue. In 1990, cemetery superintendent John C. Metzler, Jr., implemented a $1.4 million plan to clear a former 13 acres (5.3 ha) parking lot to create space for new graves.

In 2007, Metzler implemented the Millennium Project, a $35 million expansion plan to begin utilizing the Arlington woodland, Ft. Myer, and Navy Annex land. The project also included converting 40 acres (16 ha) of unused space and 4 acres (16,000 m2) of maintenance property on the cemetery grounds into burial space in 2006 and 2007 to allow an additional 26,000 graves and 5,000 inurnments. The Millennium Project expanded Arlington’s physical boundaries for the first time since the 1960s, and was the largest expansion of burial space at the site since the American Civil War. Metzler’s plans were criticized and opposed by several environmental and historical preservation groups, as well as by the NPS and the manager of Arlington House.

In January 2013, Arlington County, Virginia, signed a Memorandum of Understanding (MOU) with Arlington Cemetery officials to expand the cemetery even further. Under the tentative plan, Arlington County will give up the easement for Southgate Road (which lies between the Navy Annex property and the cemetery’s 2012 boundary), and obtain a narrow easement along the southwest border of the Navy Annex site for a new Southgate Road. In exchange, the Department of Defense will give the Navy Annex parking lot to the county. Army land west of South Joyce Street to Columbia Pike would be transferred to the county as well. Additionally, roughly the northern half of the Virginia Department of Transportation land bounded by South Joyce Street, Columbia Pike, and South Washington Boulevard would be conveyed by the state to the cemetery. The cloverleaf interchange between Columbia Pike and S. Washington Blvd. would be eliminated, and the hairpin turn in Columbia Pike straightened, to provide a safer, more natural exit from S. Washington Blvd. onto Columbia Pike. Although exact acreages were not specified and the plan depends on state cooperation, the MOU if implemented would create a more contiguous plot of land for the cemetery.

A portion of Arlington Woods on Humphreys Drive.

In May 2014, Arlington National Cemetery celebrated the 150th anniversary of its founding with a series of events, tours, and lectures.

During these celebrations, cemetery officials formally redesignated the Old Amphitheater as the James R. Tanner Memorial Amphitheater. James R. Tanner was a Union Army officer who lost both legs during the war. He later became a War Department stenographer, and recorded much of the early evidence in the investigation into the assassination of Abraham Lincoln. He later was active in the Grand Army of the Republic, a Union Army veterans group. Tanner is buried a few yards from the amphitheater.