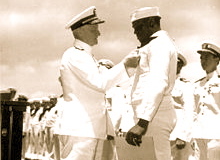 We call upon the president and congress to declare war on Japan and racial prejudice in our country. Certainly we should be strong enough to whip them both, The Pittsburgh Courier 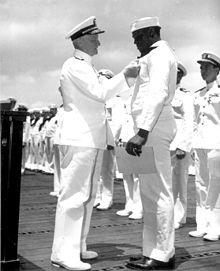 Admiral Chester W. Nimitz pins Navy Cross on Doris Miller, at ceremony on board warship in Pearl Harbor, 27 May 1942

Despite a high enlistment rate in the U.S. Army, African Americans were not treated equally. Racial tensions existed. At parades, church services, in transportation and canteens the races were kept separate.

Many soldiers of color served their country with distinction during World War II. There were 125,000 African Americans who were overseas in World War II. Famous segregated units, such as the Tuskegee Airmen and 761st Tank Battalion and the lesser-known but equally distinguished 452nd Anti-Aircraft Artillery Battalion proved their value in combat, leading to desegregation of all U.S. Armed Forces by order of President Harry S. Truman in July 1948 via Executive Order 9981.

Doris Miller, a Navy mess attendant, was the first African American recipient of the Navy Cross, awarded for his actions during the attack on Pearl Harbor. Miller had voluntarily manned an anti-aircraft gun and fired at the Japanese aircraft, despite having no prior training in the weapon’s use.

The Port Chicago disaster on July 17, 1944, was an explosion of about 2,000 tons of ammunition as it was being loaded onto ships by black Navy soldiers under pressure from their white officers to hurry. The explosion in Northern California killed 320 military and civilian workers, most of them black. The aftermath led to the Port Chicago Mutiny, the only case of a full military trial for mutiny in the history of the U.S. Navy against 50 Afro-American sailors who refused to continue loading ammunition under the same dangerous conditions. The trial was observed by the then young lawyer Thurgood Marshall and ended in conviction of all of the defendants. The trial was immediately and later criticized for not abiding by the applicable laws on mutiny, and it became influential in the discussion of desegregation.

During World War II, most African American soldiers still served only as truck drivers and as stevedores (except for some separate tank battalions and Army Air Forces escort fighters).   In the midst of the Battle of the Bulge in December 1944, General Eisenhower was severely short of replacement troops for existing military units which were totally white in composition. Consequently, he made the decision to allow African American soldiers to pick up a weapon and join the white military units to fight in combat for the first time.   More than 2,000 black soldiers had volunteered to go to the front.   This was an important step toward a desegregated United States military. A total of 708 African Americans were killed in combat during World War II. 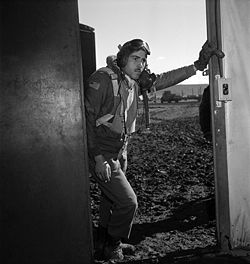 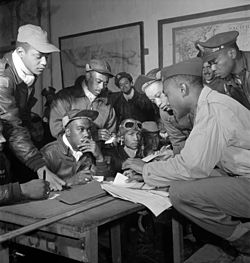 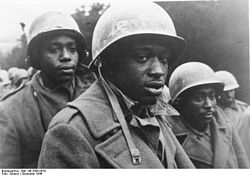 Americans captured during the Battle of the Bulge, December 1944 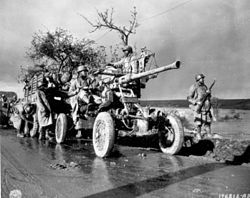 Some of the most notable African American Army units which served in World War II were: