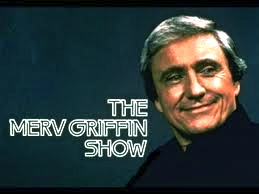 It’s safe to say that Richard Pryor got his start on the Merv Griffin Show. In this unique clip from August of 1966, Richard meets his idol Jerry Lewis and the exchange is most hilarious and endearing. Brilliant stuff. Merv Griffin had over 5000 guests appear on his show from 1963-1986. Footage from the Merv Griffin Show is available for licensing to all forms of media through Reelin’ In The Years Productions. 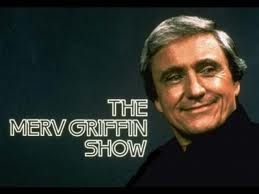 In 1965, Griffin launched a syndicated version of his talk show for the “Group W” division of Westinghouse Broadcasting. The Merv Griffin Show aired in multiple time slots throughout North America (many stations ran it in the daytime, some broadcast it opposite Johnny Carson‘s The Tonight Show, and it was carried for many years in prime time on WNEW in New York). Stations had the option of carrying either a 60-minute or a 90-minute version. Merv’s announcer-sidekick was the veteran British character actor Arthur Treacher, who had been his mentor. Treacher would introduce Griffin with the phrase: ” … and now, here’s the dear boy himself, Meeeer-vin!” after reading off the list of guests for that evening’s show.

Seeing his strong ratings, CBS offered him a network series opposite the powerhouse Tonight Show, and his program moved there in the fall of 1969, with his debut guest lineup consisting of Hedy Lamarr, Ted Sorensen, Moms Mabley, and Woody Allen. Although the series did well enough to quickly force the cancellation of another Carson competitor, ABC‘s The Joey Bishop Show, it was unable to make much of a dent in Carson’s ratings. Furthermore, the network was uncomfortable with the guests Griffin wanted, who often spoke out against the Vietnam War and on other taboo topics. When political activist Abbie Hoffman was Griffin’s guest in April 1970, CBS blurred the video of Hoffman so viewers at home would not see his trademark American flag pattern shirt, even though other guests had worn the same shirt in the past, uncensored, and Pat Boone appeared in an automobile commercial on that very broadcast wearing a similar flag-motif shirt. 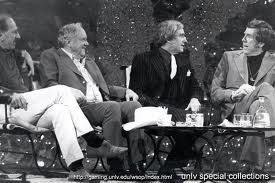 That same year, Griffin relocated his show from New York to Los Angeles, but without sidekick Arthur Treacher, who told him “at my age, I don’t want to move, especially to someplace that shakes”. From that point on, Griffin would do the announcing himself, and walk on stage with the phrase: “And now…, here I come!”

However, Griffin’s show continued to rank in second place behind Carson, even after the move. By early 1972, sensing that his time at CBS was ending, and tired of the restrictions imposed by the network, Griffin secretly signed a contract with rival company Metromedia. The contract with Metromedia would give him a syndication deal as soon as CBS canceled Griffin’s show. Within a few months, Griffin was fired by CBS. His new show began the following Monday and proved to be more successful than its network counterpart, running until 1986. 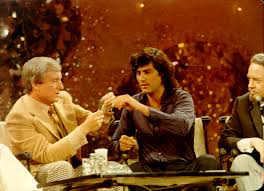 A typical show would begin with a short introduction by Griffin, during which he would sometimes sing a song. Various celebrity guests would follow, conversing with Griffin. Generally the show originated in Los Angeles, but Griffin often taped in Las Vegas. In addition, from 1969 to 1970 the show was located at the Cort Theatre in New York City and would return to New York in the 1970s and 80s for special shows in the Ed Sullivan Theater and the Vivian Beaumont Theater at Lincoln Center. One set of popular and regularly returning artists were Motown‘s premier girl-group, The Supremes who made guest appearances in 1971, 1975 and 1976, with a rotating line up in each show.

Arnold Schwarzenegger made his talk show debut in the United States on Griffin’s talk show in 1974 after moving from Austria and becoming a bodybuilder.

Later, Griffin dedicated two shows to the topic of Transcendental Meditation and its founder Maharishi Mahesh Yogi, one in 1975, the other in 1977. Griffin himself was an enthusiastic student of the practice. 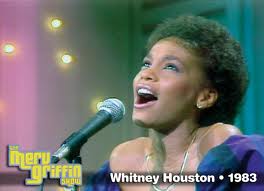 Seinfeld spoofed the show in Season 9, Episode 6, “The Merv Griffin Show,” in which Cosmo Kramer pretends that he hosts his own talk show using the discarded set from the show, which he sets up in his apartment.

Andy Kaufman‘s appearance on the show in a segment produced by John Scura was edited into the 1999 biopic Man on the Moon, with Griffin being played by character actor Mike Villani. The movie claims that all guests of the show receive an autographed photo of Mr. Merv Griffin, mainly as prizes on game shows), coupons, and Turtle Wax.

The Merv Griffin Show was parodied on Second City Television, with Griffin played by Rick Moranis. The sketches included a crossover with The Andy Griffith Show and a mashup of 2001: A Space Odyssey and Close Encounters of the Third Kind.