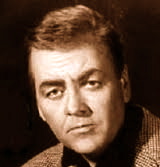 “GOVERNOR LESTER MADDOX, Governor of Georgia, argues with Joe Pyne about the current state of the nation and his role; after about 25 minutes of acrimonious dialogue, Governor Maddox stalks off the set and refuses to return.” is the description on the film can, courtesy of Hartwest Productions, Inc. Filmed/broadcast date circa November 1968. www.joepyne.com. 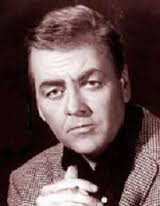 Joe Pyne (22 December 1924 – 23 March 1970) was an American radio and television talk show host, who pioneered the confrontational style in which the host advocates a viewpoint and argues with guests and audience members. He was an influence on other major talk show hosts such as Bill O’Reilly, Rush Limbaugh, Glenn Beck, Wally George, Alan Burke, Chris Matthews, Morton Downey, Jr., Bob Grant, and Michael Savage.

Joseph Pyne was born in Chester, Pennsylvania. His father, Edward Pyne, was a bricklayer; his mother, Catherine, was a housewife. Pyne graduated from Chester High School in 1942, and immediately enlisted in the United States Marine Corps. He saw combat in the South Pacific, where he earned three battle stars. In 1943, during a Japanese bombing attack, he was wounded in the left knee. In 1955, he lost the lower part of that leg due to a rare form of cancer. 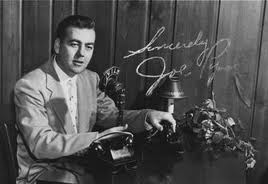 Discharged from the Marines at the end of World War II, Pyne attended a local drama school to correct a speech impediment. While studying there, he decided to try radio. He worked briefly in Lumberton, North Carolina, before he was hired at a new station, WPWA, in Brookhaven, Pennsylvania. However, he argued with the owner and was fired.  Next, he got a job at radio station WILM (AM) in Wilmington, Delaware, the first of three times he would work at that station. He moved to WVCH, a new station in Chester, which went on the air in March 1948. Seeing little chance to advance his career in Chester, Pyne left after a year and a half. He moved to Kenosha, Wisconsin, where he was hired at WLIP, owned by local businessman William Lipman (hence the call letters). After six months of hosting innocuous programs such as “Meet Your Neighbor” from various grocery stores, he quit during a confrontation with WLIP management in which he threw Lipman’s typewriter against a wall. Pyne worked at several stations in Atlantic City, New Jersey, and began to change his style of broadcasting.

Pyne gradually tired of being a disc jockey who made comments about politics and current events. He developed his on-air persona as an opinionated host who knew something about everything. He returned to WILM (AM) in Wilmington, where he debuted as a talk show host in 1950. He would later tell reporters that he first experimented with two-way talk during his time in Kenosha.  His new show was unique. He named it It’s Your Nickel, a popular idiomatic phrase when a call from a pay phone cost five cents. The format was Pyne expressing his opinions on various topics. Listeners would call to ask questions, offer their own opinions, or raise new topics. At first, Pyne didn’t put callers on the air; he paraphrased for the audience what they had said. Soon the callers and his interaction with them became the heart of the show. Pyne became famous for arguing with or insulting those with whom he disagreed. One of his trademark insults was, “Go gargle with razor blades.”

By the early 1950s, television was replacing radio as America’s main medium. In 1954, Pyne moved to television with The Joe Pyne Show, broadcast by WDEL-TV in Wilmington. In 1957, he moved to Los Angeles. His initial show was unsuccessful, and he returned to the Wilmington area. He hosted a TV talk show WVUE, Channel 12, which was also seen in Philadelphia, and received positive reviews from critics. In the late 1950s the local black press generally praised him for inviting black newsmakers on his show to discuss issues of concern to their community. One of his regular guests was a member of the editorial staff of the area’s black newspaper, the Philadelphia Tribune, usually a columnist or the newspaper’s publisher.  Pyne continued this program until late 1959, when he returned to Los Angeles. This time, he was more successful. By 1960, he was hosting a radio show that was first on KABC (AM) until 1964 when the acerbic Bob Grant took over Pyne’s show. Pyne continued on KLAC. This led to a television show on KTTV.

In 1965, during the Watts Riots in Los Angeles, Pyne was interviewing a black militant on his TV show. At one point, Pyne opened his coat to reveal that he was carrying a handgun. His guest did likewise. The station suspended Pyne for one week as a result of this stunt.

In 1965, he began broadcasting a nationally syndicated show that was carried by as many as 85 television stations and 250 radio stations at its peak. At the height of his fame, he was making $200,000 annually.

In 1966, NBC gave Pyne a daytime game show, Showdown. Its distinguishing feature is that contestants who missed a question would fall to the floor in a breakaway chair. Showdown lasted only three months and was replaced by The Hollywood Squares. 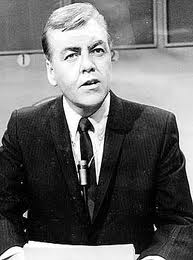 Pyne spoke out against racial discrimination and supported the Vietnam War. He ridiculed hippies (a favorite target), homosexuals, and feminists. Though generally a conservative, Pyne spoke in favor of labor unions. His tendency toward insult and vitriol offended most critics, who called him “outrageous,” “belligerent,” and “self-righteous.” Groups like the Anti-Defamation League accused him of catering to bigots; however, audiences kept listening and watching.

Pyne was rude and confrontational with guests, often attempting to throw them off, but there are stories of the rare times when someone got the better of him. One famous tale recounted by Steadman Upham, president of Chapman University, in his address Wooden Leg or Table: The Changing Landscape of American Education (1999) is how he lost a verbal duel with rock musician Frank Zappa. Pyne insulted Zappa by saying, “So I guess your long hair makes you a woman.” Zappa replied, “So I guess your wooden leg makes you a table.” While it sounds plausible, no one who was around at that time recalls it happening, nor is there any evidence that Frank Zappa was ever on the Joe Pyne Show.

But there are many documented cases of Pyne getting into altercations with people on his show. He preferred controversial guests such as Sam Sloan and invited members of the Ku Klux Klan, the American Nazi Party and followers of murderer Charles Manson. Pyne argued this was educational, since it exposed these violent groups to the public eye.  The Joe Pyne Show was not only verbally aggressive: at times it became physical with chairs being thrown at him by the person being interviewed. If the “discussion” got too heated, the guest would often walk off, or Pyne would himself throw the guest off the show. Still, Pyne once described himself as an “overly compensating introvert.”

There was another story of a notorious confrontation, involving Paul Krassner, the editor of The Realist, who was a guest on Pyne’s TV show. Pyne made insulting remarks about Krassner’s acne scars. Without missing a beat, Krassner asked Pyne if his wooden leg caused any difficulty in having sex with his wife. Pyne was flummoxed, so he sought comments from his audience, made up at this point in his career by whoever KTTV could bring in from Hollywood Boulevard. The audience happened to include musician and activist Phil Ochs, whom Krassner had brought along to the studio. Ochs very calmly remarked, “What Paul Krassner has just done is in the finest tradition of American journalism.” No videos of this incident survive, though Krassner insists that it did occur and was edited out.

Ron Karenga, an African American author, Marxist political activist, and creator of Kwanzaa, was a frequent guest on the show, as was Robert Dornan ( B-1 Bob), later to become a congressman from Orange County. 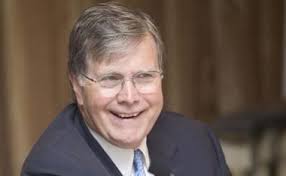 He developed lung cancer and died in Los Angeles on 23 March 1970 at the age of 45. Pyne was survived by his fifth wife Britt Larsen Pyne, son Ed, daughters Cathee, Sheila, and Claudia.