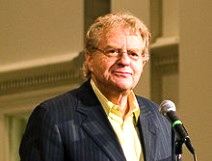 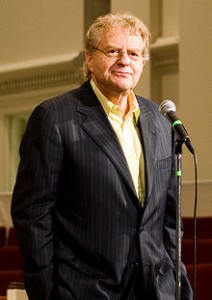 The Jerry Springer Show is a syndicated television tabloid talk show hosted byJerry Springer, a former politician, broadcast in the United States and other countries.  It is videotaped at the Stamford Media Center in Stamford, Connecticut and is distributed by NBC Universal Television Distribution, although it is not currently broadcast on any NBC-owned stations.

A typical episode of Springer begins with a title card warning parents that the show may contain content inappropriate for children. e.g. Springer then enters the stage by sliding down a stripper pole stage right, usually being greeted by audience applause, shaking hands with spectators at the front row and the “Je-rry!, Je-rry!” chant goes on for exactly 2 and a half minutes. Once the audience settles down, he welcomes the viewer to the show, introduces a particular situation, and interviews a guest who is experiencing it. After finishing the interview, Springer announces the entrance of another guest whom the first guest would like to confront. The second guest enters the stage, and a confrontation between the two guests usually occurs, often breaking down into a brawl that is eventually broken up by on-set security personnel. Once the fight is broken up, Springer interviews the second guest about the situation faced by the first guest.

Often, the guests will be given a cup of water after fighting, ostensibly to “cool off “, but inevitably, the people will toss the water at each other, thus resuming the altercation again.

This cycle is repeated about twice for other sets of guests on the show. Once all guests have told their stories, there is usually a “question and answer” segment where audience members ask guests questions relevant to their situations, although usually their questions come to insult a guest or they flash the audience in exchange for “Jerry Beads” (Mardi Gras-style beads with the show logo), with the few serious questioners mocked by the audience to “Go to Oprah!” The producers then select the person with the most memorable question to say, “We’ll be right back with Jerry’s final thought.” Springer then ends the show by giving an oratory viewpoint on the principles of refined values in regards to the featured guests. He ends the segment with the concluding statement, “Till next time, take care of yourself and each other”.

Generally, Springer tends to present his program standing up pacing the aisle steps between the seating areas rather than having a podium or mark on the main stage. (This is thought to be to protect himself from the potential violence occurring on the stage) 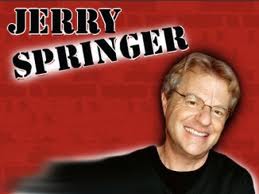 Sometimes the show will have a look back at previous episodes. These have been rebranded as Classic Springer, some with a false Masterpiece Theatre-like theme and patina. These shows are interspersed with commentary from Springer himself, usually before and after commercial breaks.

The set for the show has had two major changes over the years. When the show first started in 1991, it was very basic with white walls, in an effort to capture the feel of fellow talk show Donahue, Jerry’s haircut and glasses even seeming to make him look like Phil Donahue. The general look of this set was carried over when the series first moved to Chicago in September 1992, with an unpolished, open air look and bright colored shapes.

In the fall of 1994, a few months after the series underwent its format overhaul, the studio received a makeover to make it look a bit warmer and more inviting, complete with brick walls, artwork, and bookcases. The stage walls were designed so that they could be projected outward into the audience, making room for a catwalk that was used in shows such as the 1998 episodeStripper Wars!. In late 2000, the whole set was changed again to its current “industrial” look, changes initially welcomed due to the reduced ratings of the 1999-2000 season. In 2007, the set was slightly changed, with a larger studio audience, bigger stage, and a balcony, which was above the stage and ended at the pole. Springer now uses this as his main entrance by sliding down the pole. The logo and stage design have been carried across to the new studio in Connecticut with only a few changes. 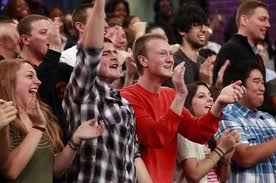 Steve Wilkos was the director of security from 1994-2007. He now hosts his own show, The Steve Wilkos Show. As of Season 19, the two primary security guards are Pete Kelly and Jason Brandstetter. Pete is often the first on stage and handles most of the action, while Jason backs him up. After the move to Stamford, the show hired two local firefighters, Harold and Chris, to join the security team. They serve as the front row audience’s protection from the on-stage fights and also are assistants to Pete and Jason if things get out of hand.

The Jerry Springer Show debuted on September 30, 1991, with a family reunion as its first show. Initially, Springer was distributed by Multimedia Entertainment, later going to the former Universal and then to Studios USA.

Originally seen in only the four markets where Multimedia owned TV stations, it was dramatically different than today’s version of the show. It started as an issues-oriented and political talk show, a longer version of the commentary for which Springer had gained local fame as a reporter and anchor, and for its first season, was even taped at Springer’s former station, WLWT in Cincinnati.  Guests early on included Oliver North and Jesse Jackson, and the topics included homelessness and gun politics, as well as the social effects of rock music, featuring shock rock stars like GG Allin, El Duce from The Mentors and GWAR as guests. 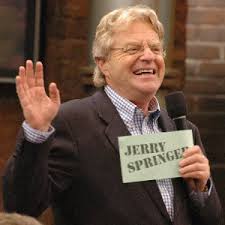 For its second season in the fall of 1992, the series was purchased by the NBC owned-and-operated stations, thus allowing it to finally achieve full national clearance, and production was moved to its longtime home at Chicago’s NBC Tower (with Springer leaving his longtime position at WLWT in order to do so). However, ratings remained low and by April 1994, Multimedia threatened cancellation if ratings didn’t improve by that November, which led to an overhaul that saw original producer Burt Dubrow’s departure and replacement by fellow Springer producer Richard Dominick.

The search for higher ratings led the program gradually towards provocative topics, becoming more successful as it became geared towards youthful viewers (modeled after Ricki Lake‘s popular talk show) by introducing more controversial topics. However, there were still some traditional and serious topics featured on the show at this time.

In 1995, there were two performances by Comedy Central transgender star Jade Esteban Estrada.  It became a “freak show” where guests seek their 15 minutes of fame through discussion and demonstrations of deviant behavior.  In 1996, Springer wanted people to send him videotapes explaining why they wanted Springer to tape a show in their home.  Its extraordinary success has led it to be broadcast in dozens of countries. The show gained so much popularity that for a while it was the top-rated daytime talk show in the United States.

In 1998, several stations that carried Springer, including WLWT in Cincinnati where Springer was a news anchor, refused to carry the episode “I Married A Horse.”

In 1999, the show made a cameo appearance in the film Austin Powers: The Spy Who Shagged Me, with Dr. Evil and his son Scott discussing about being evil. 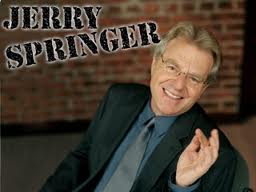 In 2000, Springer was given a five-year, $30 million contract extension paying him $6 million per year.  The same year, a married couple, Ralf and Eleanor Panitz, were guests on an episode of the show entitled “Secret Mistresses Confronted” with Mr. Panitz’s ex-wife, Nancy Campbell-Panitz, in which they complained about Ms. Campbell-Panitz’s behavior and accused her of stalking them. Hours after it was broadcast on July 24, 2000, Ms. Campbell-Panitz was found dead in a home that the three were fighting over, and Florida police soon confirmed that they were treating the death as homicide.  It was then reported that Mr. Panitz, having been issued a first-degree murder warrant for the death, was trying to flee to Canada to avoid prosecution.  Upon news of the 52-year old woman’s murder, a spokeswoman for the program issued a statement saying it was “a terrible tragedy.” 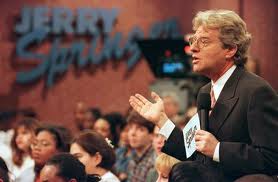 In August 2000, Springer appeared on CNN‘s Larry King Live to discuss the incident, claiming that it “had nothing to do with the show” and that his talk show does not glamorize deviant behavior.  On March 27, 2002, after a 10-day trial and 18 hours of deliberating from jurors, Mr. Panitz was convicted of the murder and sentenced to life in prison.

In 2001, efforts from groups like the Parents Television Council and American Family Association made some advertisers decrease or stop their sponsorship of Springer. For the United Kingdom, the Independent Television Commission bannedSpringer and other tabloid talk programs from being shown on television during daytime hours on school holidays in response to numerous parental complaints and concerns about children’s potential exposure to the salacious content (there was a short-running British version of the show made for ITV called The Springer Show that was lighter and more tongue-in-cheek).  The show also topped TV Guide magazine’s 2002 list of “The Worst TV Shows Ever.”  The phrase “Jerry Springer Nation” began to be used by some who see the program as being a bad influence on the morality of the United States.  In addition, the phrase has shown the association of Springer with any “lowbrow” type of entertainment in general.

In 2003, a British opera inspired by the series, Jerry Springer: The Opera, began playing in the United Kingdom.  The same year, it was revealed that a group of guests from Hayward, California faked a “love triangle” for an appearance on two episodes of the show; one guest in the group was murdered, but Hayward police determined that his appearance was not connected to his murder.

By 2005, security director Steve Wilkos became sort of a cult figure on his own, and would close each show walking down a hallway engaging in casual talk with one of the more colorful guests of the preceding episode. He also would occasionally host the show. Episodes that he hosted were intended to be more serious in tone than the typical Springer show.  Wilkos leftSpringer at the end of the 2006-07 season to pursue his own self-titled talk show, The Steve Wilkos Show.