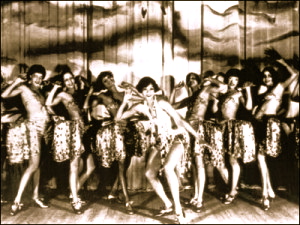 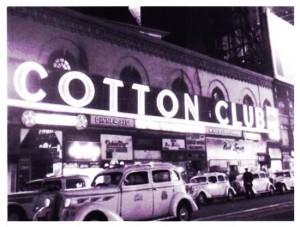 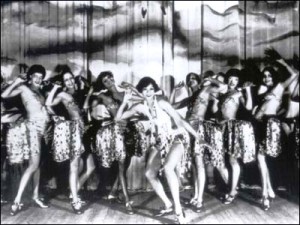 In 1920, heavyweight boxing champion Jack Johnson opened the Cotton Club under the name “Club Deluxe” on the corner of 142nd Street and Lenox Avenue in the heart of the Harlem district. Owney Madden, a prominent bootlegger and gangster, took over the club in 1923 while imprisoned in Sing Sing and changed its name to the Cotton Club.” A deal was arranged between the two that allowed Johnson to still be the club’s manager. Madden “used the cotton club as an outlet to sell his #1 beer to the prohibition crowd.” (While the club was closed briefly in 1925 for selling liquor, it reopened without trouble from the police). A man by the name of Herman Stark became the stage manager from then on. The site chosen for the downtown Cotton Club was ideal. It was a big room on the top floor of a building on Broadway and Forty-eight Street, where Broadway and Seventh Avenue meet – an important midtown crossroads, and in the heart of the Great White Way, the Broadway Theater District.  While Herman Stark and the club’s owners were quite certain the club would do well in its new location, they realized that depended on a smash-hit opening show.

The Cotton Club was a “Whites-only” foundation. The club reproduced the racist imagery of the times, often depicting blacks as savages in exotic jungles or as “darkies” in the plantation South. The club imposed a more subtle color bar on the chorus girls whom the club presented in skimpy outfits: they were expected to be “tall, tan, and terrific,” which meant that they had to be at least 5 feet 6 inches tall, light-skinned, and under twenty-one years of age.  The skin color of the male dancers was more varied.“Black performers did not mix with the club’s clientele, and after the show many of them went next door to the basement of the superintendent at 646 Lenox, where they imbibed corn whiskey, peach brandy, and marijuana.”{The Harlem Renaissance, Steve Watson} Ellington was expected to write “jungle music” for an audience of whites. What Ellington contributed to the Cotton Club is priceless and is summed up perfectly in this 1937 New York Timesexcerpt: “So long may the empirical Duke and his music making roosters reign – and long may the Cotton Club continue to remember that it came down from Harlem.” The prices for customers were high so the performers had very high salaries. {pg 76,The Harlem Reader, Duke Ellington}. 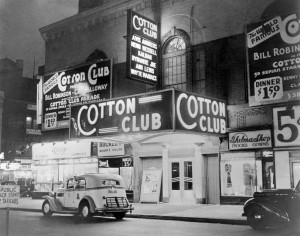 Nonetheless, the club also helped launch the careers of Fletcher Henderson, who led the first band to play there in the year 1923, and Duke Ellington, whose orchestra was the house band there from December 4, 1927 to June 30, 1931. In 1927, the first revue with Duke Ellington was called ‘Rhythmania’ and featured Adelaide Hall, who had just recorded several songs with Ellington including ‘Creole Love Call‘.  Their recording of ‘Creole Love Call‘ became a worldwide hit. The club not only gave Ellington national exposure through radio broadcasts originating there (first through WHN, then over WEAF and after September 1929 through the NBC Red Network – WEAF was the flagship station for that network – on Fridays), but enabled him to develop his repertoire while composing not only the dance tunes for the shows, but also the overtures, transitions, accompaniments, and “jungle” effects that gave him the freedom to experiment with orchestral colours and arrangements that touring bands rarely had. Ellington recorded over 100 compositions during this era. Eventually, in deference to a request by Ellington, the club slightly relaxed its policy of excluding black customers. 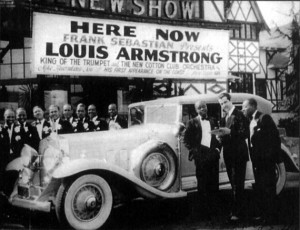 Cab Calloway’s orchestra brought its Brown Sugar revue to the club in 1930, replacing Ellington’s orchestra after its departure in 1931; Jimmie Lunceford‘s band replaced Calloway’s in 1934, while Ellington, Armstrong, and Calloway returned to perform at the club in later years. The most lavish revue in the Cotton Club’s thirteen-year history opened on Broadway on September 24, 1936. Robinson and Calloway headed a roster of some 130 other performers.  The club was also the first show business opportunity for Lena Horne, who began there as a chorus girl at the age of sixteen.Dorothy Dandridge performed there while still one of The Dandridge Sisters, while Coleman Hawkins and Don Redmanplayed there as part of Henderson’s band. Tap dancers Bill “Bojangles” Robinson, Sammy Davis Jr. (as part of the Will Mastin Trio), and the Nicholas Brothers starred there as well. 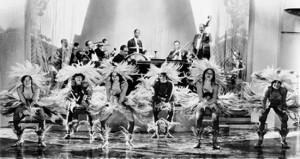 The club also drew from white popular culture of the day. Walter Brooks, who had produced the successful Broadway show Shuffle Along, was the nominal owner. Dorothy Fields and Jimmy McHugh, one of the most prominent songwriting teams of the era, and Harold Arlen provided the songs for the revues, one of which, “Blackbirds of 1928“, starring Adelaide Hall featured the songs “I Can’t Give You Anything But Love” and “Diga Diga Doo”, produced by Lew Leslie on Broadway.

In 1934, Adelaide Hall starred at the Cotton Club in ‘Cotton Club Parade’, the biggest grossing show that ever appeared at the club. The show opened on 11 March and ran for eight months, attracting over 600,000 paying customers. The score was written by Harold Arlen and Ted Koehler and featured the classic song ‘Ill Wind’. During Hall’s performance of ‘Ill Wind’, to add authenticity to the production, a dry ice machine was used on stage to create a fog effect. It was the first time such equipment had been used on a stage.  Featured on the bill was the 16-year-old Lena Horne.

The club was closed temporarily in 1936 after the race riot in Harlem the previous year. Photographer Carl Van Vechtenvowed to boycott the club for having such racist policies in place.{The Harlem Renaissance, Steve Watson} The Cotton Club reopened later that year at Broadway and 48th.  In fact a 1937 New York Times article writes, “The Cotton Club has climbed aboard the Broadway bandwagon, with a show that is calculated to give the customers their money’s worth of sound and color – and it does.”  That year Stark agreed to pay tap dancer Bill “Bojangles” Robinson $3,500 a week, the highest salary ever paid to a black entertainer in a Broadway production, and more money than had ever been received by any individual for a night club performance.

It closed for good in 1940, under pressure from higher rents, changing tastes and a federal investigation into tax evasion by Manhattan nightclub owners. The Latin Quarter nightclub opened in its space and the building was torn down in 1989 to make way for a hotel. All in all, the Broadway Cotton Club was a highly successful blend of old and new. The site may have been new, the décor may have been slightly different, but once a patron entered and was comfortably seated, he knew he was in a familiar place. 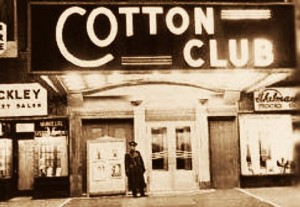 Jazz writer James Haskins wrote in 1977, “Today, there is a new incarnation of the Cotton Club which sits on the most western end of the 125th Street under the massive Manhattanville viaduct. The windowless block of a building has a less dramatic display out front but seems to be popular with tourists for Sunday jazz brunches.”

The Cotton Club is a movie directed by Francis Ford Coppola, which offers a playboy history of the club in the context of race relations in the 1930’s and the battles between Madden, Dutch Schultz, Vincent “Mad Dog” Coll, Lucky Luciano, and Ellsworth “Bumpy” Johnson. It is discussed in the 2001 Ken Burns PBS documentary, Jazz.

The Cotton Club was briefly depicted in the 1997 movie Hoodlum featuring Laurence Fishburne, Tim Roth, and Andy Garcia.  The club, frequented by Dutch Schultz (Roth), was the site of a confrontation between Schultz and Ellsworth “Bumpy” Johnson (Fishburne).

A fictionalized version of the club, renamed the Cotton Pickers Club, also appears in the James Cagney film Taxi!.

The video for the 1983 song “Joanna” by Kool & the Gang features the eponymous Joanna reminiscing back to her days as a dancer at the Cotton Club.

In an episode of the hit Disney Channel TV show Ant Farm, the main character wakes up as Ella Fitzgerald and she sings in the Cotton Club.

After Midnight is a 2013 Broadway musical revue about the music of Duke Ellington‘s years at the famed Harlem nightclub.