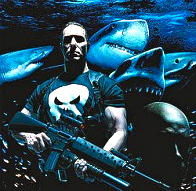 He doesn’t fight crime; he punishes it. Join http://www.WatchMojo.com as we explore the comic book origins of Frank Castle, otherwise known as The Punisher. 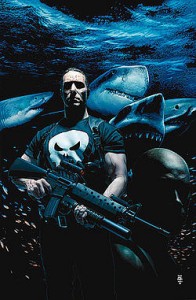 The Punisher is a fictional character, an antihero that appears in comic books published by Marvel Comics. The character was created by writer Gerry Conwayand artists John Romita, Sr., and Ross Andru, with publisher Stan Lee providing the name. The Punisher made his first appearance in The Amazing Spider-Man#129 (cover-dated Feb. 1974).

The Punisher is a vigilante who employs murder, kidnapping, extortion, coercion,threats of violence, and torture in his war on crime. Driven by the deaths of his wife and two children, who were killed by the mob during a shootout in New York City‘s Central Park, the Punisher wages a one-man war on the mob and all criminals in general by using all manner of conventional war weaponry.   His family’s killers were the first to be slain.   A war veteran of the U.S. military, Frank Castle is a master of martial arts, stealth tactics, guerrilla warfare, and a wide variety of weapons.

The Punisher’s brutal nature and willingness to kill made him a novel character in mainstream American comic books in 1974. By the late 1980s, he was part of a wave of psychologically troubled antiheroes and was featured in several monthly publications, including The Punisher War Journal, The Punisher War Zone, andThe Punisher Armory. Despite his violent actions and dark nature, the Punisher has enjoyed some mainstream success (although toned down) on television, making guest appearances on Spider-Man: The Animated Series and even The Super Hero Squad Show. In feature films, Dolph Lundgren portrayed the Punisher in 1989, as did Thomas Jane in 2004, and Ray Stevenson in 2008. 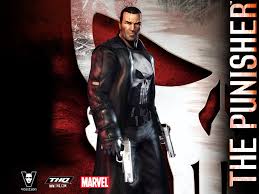 The Punisher was conceived of by Gerry Conway, writer of The Amazing Spider-Man, who helped design the character’s distinctive costume. As Conway recalled in 2002, that, “In the ’70s, when I was writing comics at DC and Marvel, I made it a practice to sketch my own ideas for the costumes of new characters — heroes and villains — which I offered to the artists as a crude suggestion representing the image I had in mind. I had done that with the Punisher at Marvel.  Conway had drawn a character with a small death’s head skull on one breast. Marvel art director John Romita, Sr., took the basic design, blew the skull up to huge size, taking up most of the character’s chest, and added a cartridge bandolier that formed the skull’s teeth.   Amazing Spider-Man penciller Ross Andru was the first artist to draw the character for publication.

Stan Lee, then Marvel’s editor-in-chief, recalled in 2005 that he had suggested the character’s name:

“Gerry Conway was writing a script and he wanted a character that would turn out to be a hero later on, and he came up with the name the Assassin. And I mentioned that I didn’t think we could ever have a comic book where the hero would be called the Assassin, because there’s just too much of a negative connotation to that word. And I remembered that, some time ago, I had had a relatively unimportant character … [who] was one of [the cosmic antagonist] Galactus‘ robots, and I had called him the Punisher, and it seemed to me that that was a good name for the character Gerry wanted to write — so I said, ‘Why not call him the Punisher?’ And, since I was the editor [sic; Lee had been named publisher in 1972], Gerry said, ‘Okay.” 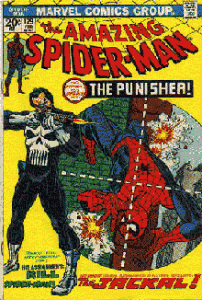 Appearing for the first time in The Amazing Spider-Man #129 (Feb. 1974), the Punisher was initially an antagonist of the titular hero. He was a bloodthirsty vigilante who had no qualms about killing gangsters, something that most superheroes of the time refrained from doing. J. Jonah Jameson described him as “the most newsworthy thing to happen to New York since Boss Tweed.” In this appearance, the Punisher was determined to kill Spider-Man, who was wanted for the apparent murder of Norman Osborn.   This version of the Punisher was shown as an athletic fighter, a master marksman, and an able strategist. All he would reveal about himself was that he was a former U.S. Marine. He had a fierce temper but also showed signs of considerable frustration over his self-appointed role of killer vigilante. In particular, he was engaged in extensive soul-searching as to what was the right thing to do: although he had few qualms about killing he was outraged when his then-associate, the Jackal, apparently killed Spider-Man by treacherous means rather than in honorable combat. Spider-Man, who was himself no stranger to such torment, concluded that the Punisher’s problems made his own seem like a “birthday party.”

The character was a hit with readers and started to appear on a regular basis, teaming up with both Spider-Man and other heroes such as Captain America and Nightcrawler throughout the 1970s and early 1980s.   During his acclaimed run on Daredevil, writer and artist Frank Miller made use of the character, contrasting his attitudes and version of vigilante action to that of the more liberal Man Without Fear.

In the early 1980s, artist Mike Zeck and writer Steven Grant proposed creating a Punisher series. Marvel published a miniserieswhose premiere (January 1986) was bannered on the cover as the first of four; however, the series had always been intended to be five issues long, and the banner was an error that recurred throughout the entire run.   An important element of the story was a retcon that explains that many of the Punisher’s more extreme actions to this point were the result of being poisoned with mind-altering drugs. 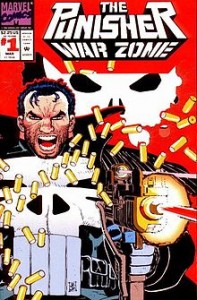 An ongoing series, also titled The Punisher, premiered the next year. Initially by writer Mike Baron and artist Klaus Janson, it eventually ran 104 issues (July 1987 – July 1995) and spun off two additional ongoing series — The Punisher War Journal (80 issues, November 1988 – July 1995) and The Punisher War Zone (41 issues, March 1992 – July 1995), as well as the black-and-white comics magazine The Punisher Magazine (16 issues, November 1989 – September 1990) and The Punisher Armory(10 issues, no cover dates, starting 1990), a fictional diary detailing “His thoughts! His feelings! His weapons!” (as stated on the cover of issue #1). The Punisher also appeared in numerous one-shots and miniseries, and made frequent guest appearances in other Marvel comics, ranging from superhero series to the Vietnam War-era comic The ‘Nam.

During this era, the Punisher was assisted by his then-partner, Microchip. Serving as a Q type figure, he would supply the Punisher with high-tech vehicles and equipment such as armored combat “battle vans” specially built and customized.

Due to the Punisher’s homicidal nature, few of his foes became recurring antagonists, the most notable of these being the severely scarred enforcer Jigsaw. The Punisher also acquired an arch-nemesis in the form of the Kingpin, a longtime Spider-Man and Daredevil foe, and developed enmity with Daredevil himself, who likewise abhorred and fought against the Punisher’s brutal methods. Villains such as the Jackal, Bushwacker, Doctor Doom, The Reavers and Bullseye would be used to provide more of a challenge for the character. In addition, heroes such as Spider-Man, Captain America, Daredevil, Ghost Rider, theHulk, Wolverine, Nick Fury, and Moon Knight – and, on at least two occasions, the preadolescent team Power Pack – would appear. Often the stories would use the appearance of those heroes to provide commentary on the difference between the Punisher and those more colourful characters. During Don Daley’s run on The Punisher title, his version of justice was described by the editor as “an eye for an eye.” 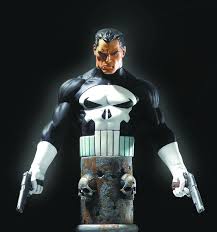 In 1995, Marvel canceled all three ongoing Punisher series due to poor sales. The publisher attempted a re-launch almost immediately, with a new ongoing series Punisher, under the new Marvel Edge imprint, by writer John Ostrander, in which the Punisher willingly joined and became the boss of an organized crime family, and later confronted the X-Men and Nick Fury. The series ran for 18 issues, from November 1995 to April 1997. Writer Christopher Golden‘s four-issue Marvel Knights miniseries The Punisher: Purgatory (November 1998 – February 1999) posited a deceased Punisher resurrected as a supernatural agent of various angels and demons. This version of the character also appeared in a 4-issue mini-series co-starring Wolverine.

A 12-issue miniseries by writer Garth Ennis and artist Steve Dillon, again titled The Punisher (April 2000 – March 2001), under the Marvel Knights imprint, revived the character’s popularity. An ongoing series (37 issues, August 2001 – February 2004), primarily by Ennis and Dillon, followed, succeeded in 2004 by an ongoing Ennis series under Marvel’s mature-readers imprint, MAX. Returning the character to his lone vigilante roots, those series combined crime focused stories with black humor. The look of the Punisher was modified further removing the white gloves and pairing his traditional skull imprinted shirt with combat trousers, black combat boots and a black trench coat. Castle has used this costume on occasion in mid-2000s stories before The Punisher War Journal vol. 2. 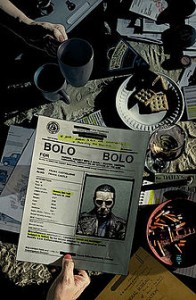 Continuing his run on the character, Garth Ennis used the freedom of the MAX imprintto write more realistic and hard-edged stories than had previously been seen.   Ennis has stated that he would “like to see less superheroes;” this desire is reflected in the gritty, realistic tone and the anti-heroic portrayals of both the title character and Nick Fury, who made two guest appearances to the series. Punisheralso made it explicit that Castle’s timeline was fixed, while Marvel adjusted those of its other characters, with his history never altered or moved up in time. Promotional art for the cover of Punisher vol. 6, #44 (March 2007), gave his birth date as February 16, 1950, but that was removed for the published issues. The last issue (#22) of PunisherMAX gives his birth year as 1947. After the departure of Ennis as writer, the series was renamed Punisher: Frank Castle with issue #66.

The imprint depicts the Punisher being active for almost 30 years, with Punisher vol. 6, #19 (June 2005), specifying he had killed approximately 2,000 people. Whereas the traditional Punisher stories remained within the United States and involved antagonists and settings of conventional domestic crime, stories of the MAX Punisher often focus on current events, ranging from corporate fraud to sexual slavery and the War on Terror. Many characters are past or current intelligence and military operatives from governmental agencies like the CIA, KGB, SIS, SAS, militaries and militias from the Balkans and Middle East, also including the IRA, all with agendas rooted in past conflicts like the Cold War or the Yugoslav wars. 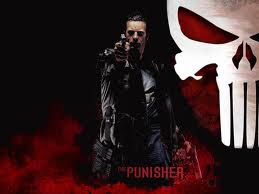 The miniseries Born by Garth Ennis and Darick Robertson further examines Castle’s roots, tracing them back to his third tour of the Vietnam War, where he undergoes a psychological and possibly supernatural transformation into the Punisher to survive a massive assault on his fortification by the combined forces of the Viet Cong and the North Vietnamese Army. The one-shot Punisher: The Tyger, by Ennis and John Severin, went even further and showed that Castle had lived with murders, deaths and criminals from his childhood.

The MAX version of the Punisher ends with the character’s death : after killing the Kingpin, Castle dies from his own wounds in issue #21 of PunisherMAX. He is buried in issue #22, as a small army of Punisher “imitators” take on the city’s mob.