You are here: Home / Education / Posting Your Photographs / WWII War Stories of the Battle of the Bulge

Battle of the Bulge

Battlefield detectives investigate what won and what lost the Battle of the Bulge. 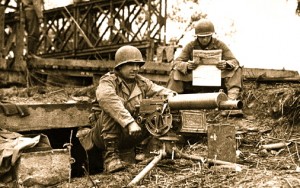 GIs guard a portable bridge with a machine gun. The U.S. Army’s leadership in Europe decided in late 1944 that the very rural Ardennes would be a great place to rest battle-worn divisions and introduce newly arrived divisions to combat. Here’s just a snippet of one of the tales from War Stories of the Battle of the Bulge. Bob Hagel, L Company, 320th Infantry Regiment, 35th Division. On January 6, I had been talking to the machine gun crew and then returned to my foxhole about twenty feet in the rear. Five minutes later a shot was fired, hitting the gunner in the head, killing him. We immediately got back in our holes and started digging them deeper. A few minutes later, I was shot through the shoulder and chest by the same sniper, was knocked down, and passed out. When I regained consciousness a while later, I was told by those in the hole with me that they were unable to get me out because one of the two medics that had come up to get me was shot through the red cross on his helmet and killed. Another man had been shot through the neck. He eventually recovered.

It was an hour later before the company commander came up with the second medic and some help to get me out of the hole, onto the stretcher, and carried back to safety. I was taken by sled, Jeep, and ambulance to the aid station and field hospital, where I was operated on. Eventually I ended up in England for treatment and rehabilitation.

I was the lucky one. I had the million-dollar wound, which got me out of the fighting but didn’t cripple or disable me. I’ll never forget the medics or the machine gunner, even though I never knew their names. I also felt sorry for the ones that never got touched but had to fight on for months, not knowing if and when it would happen. They were the heroes.