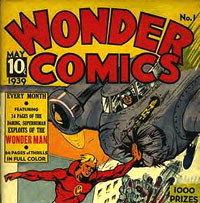 A tormented man just wanting to make the world a better place. but pushed too far when he believed that tony stark AKA iron man. this lead him to the path of evil granting him enough power to easily take down iron man and the avengers, now unable to control his ionic form, baron zemo and the enchantress force wonder man to join the masters of evil in order to keep him alive, he soon saw the error of his ways and sacrificed himself for what was right as a hero (We own no rights to this). 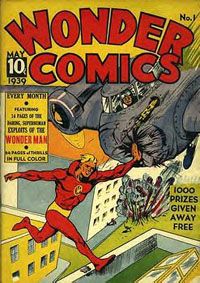 Cover of Wonder Comics #1: The only appearance of Wonder Man.

Wonder Man is a fictional superhero created by American cartoonist Will Eisner, whose first and only appearance was in the comic book Wonder Comics # 1 (May, 1939). The character is of some historical significance due to a lawsuit that resulted from his only appearance.

Wonder Man’s secret identity is Fred Carson. During an excursion to Tibet, an old monk bestows Carson with a ring that gave him the power to fight evil when the need arose. His powers are almost exactly like those of Superman, the character he’s based on.

Wonder Man was created by Will Eisner in the Eisner-Iger Shop for Victor Fox, who was publishing astrology magazines when he ran across his distributor’s reports on the incredible sales for National Periodicals’ Action Comics in February 1939. He immediately decided to get into the comic book business, setting up offices in the same building DC had theirs, then contacted Eisner. Using the pen name Willis, Eisner wrote and drew the first issue of Wonder Comics which appeared on the news stands less than six weeks later.

On March 15, 1939 DC Comics brought a copyright infringement lawsuit against Fox, due to the character’s similarities to Superman, as well as story and illustration elements that were similar to previous Superman adventures. The case was brought to court in Detective Comics, Inc. v. Bruns Publications, Inc., 111 F.2d 432 (2d Cir. 1940), in which Eisner defended the originality of his creation. Despite this testimony, the subsequent decision forced Fox to drop the character after just one issue.

Wonder Comics however, continued as a title, featuring Yarko the Great in #2, then changed its name to Wonderworld Comics featuring The Flame in #3 and continued for another 30 issues.

This was the first copyright lawsuit in comic book history and set a precedent for DC Comics’ vigorous protection of its characters (see also National Comics Publications v. Fawcett Publications).

The dispute is depicted in disguised fashion in Eisner’s semi-autobiographical graphic novel, The Dreamer. However, this depiction is at odds with Eisner’s own testimony at the trial, transcripts of which were unearthed in 2010.