Winter Storm Jonas to Become Dangerous East Coast Snowstorm; Blizzard Watch for D.C., Baltimore, N. AccuWeather Alert: Blizzard Watch in effect for some areas until Sunday. Powerful Winter Storm Jonas storm will deliver heavy ice accumulations, strong winds and coastal flooding across parts of the East before pulling away from the Atlantic seaboard on Sunday. A large swath of the country from the South to the East Coast will experience heavy snow into the weekend, while the nation’s capital and Baltimore remain under blizzard warnings for anticipated crippling amounts of snow. As of early Thursday evening, more than 85 million people – or roughly one in every four Americans – were covered by either a blizzard watch, blizzard warning, winter storm watch, winter storm warning, winter weather advisory, or freezing rain advisory from eastern Kansas to the Carolinas to the New York City area.

The worst of Winter Storm Jonas is over, but the dangerous winter storm buried a large portion of the Northeast urban corridor with more than 2 feet of snow from the Washington, D.C. area to New York City. Snow continues to fall in some areas from the Mid-Atlantic coast to Cape Cod, but as the storm pulls east, snow should end in most locations by daybreak Sunday. Gusty winds will continue to cause blowing and drifting snow, while significant coastal flooding remains a concern through Sunday morning.

Winter Storm Jonas is the largest snowstorm on record for Harrisburg, Pennsylvania; Baltimore; and JFK Airport in New York City, with all of those locations receiving over 2 feet of snow. More all-time snowfall records may continue to break as final reports are made official by the National Weather Service. Snowfall totals from the storm topped out near 40 inches in parts of West Virginia and at least 14 states in total received more than a foot of snow from the storm. 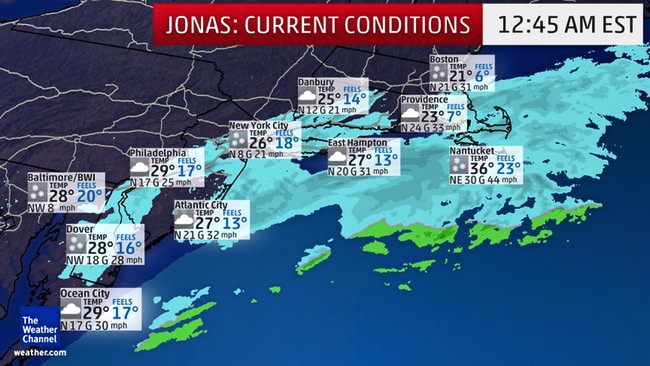 Radar and Current Winds – Radar and latest winds in the mid-Atlantic and Northeast.

As of 11 p.m. Saturday, the top snowfall total from Jonas so far is 40 inches near Glengary, West Virginia. Totals exceeding 30 inches have been reported in several other areas of West Virginia as well as south-central to southeastern Pennsylvania, northern Virginia and central to western Maryland. Parts of the New York City metropolitan area were also closing in on the 30-inch mark late Saturday night. 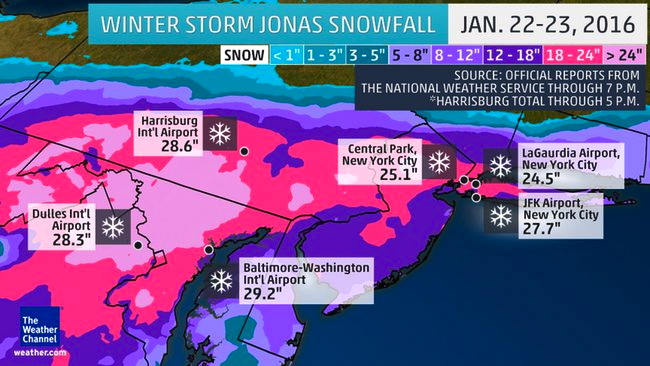 Big Snowfall in the Big Cities – Major cities that reported more than two feet of snow as of Saturday night.

Extreme winds have been observed along the mid-Atlantic coast, with a peak gust of 85 mph at Assateague Island, Maryland, at 4:40 a.m. EST. Lewes, Delaware, has seen a top wind gust of 73 mph with sustained winds peaking at 59 mph. While a few strong wind gusts remain possible Sunday morning, the most damaging winds have moved offshore.

On Saturday morning, the water level at Lewes, Delaware, rose to 9.27 feet, due to a storm surge of more than 4 feet above normal astronomical tides. This is the highest level on record at that location, beating 9.20 feet during the infamous Ash Wednesday nor’easter on March 6, 1962. Record flooding has also been observed in at least three New Jersey locations (Great Channel at Stone Harbor, Cape May Harbor, Delaware Bay at Cape May). Major impacts have been reported from the flooding from southern New Jersey into Delaware. 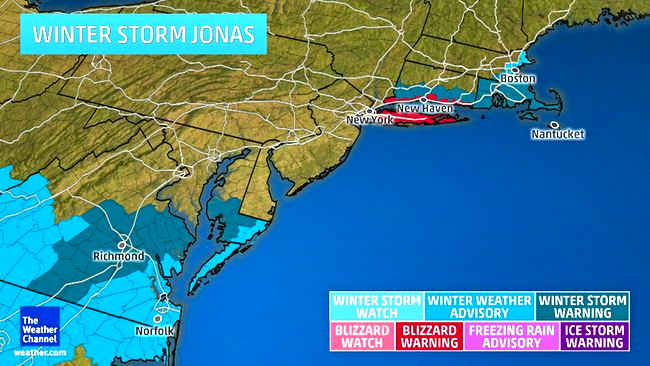 Sunday: All of the lingering snow associated with Winter Storm Jonas should move off the Atlantic coast before sunrise Sunday, leaving clearing skies for the day. Temperatures in most of the affected areas should climb at least a few degrees above freezing, allowing the cleanup to begin. 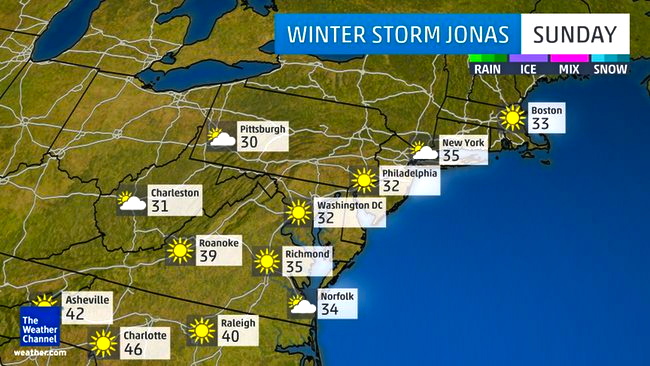