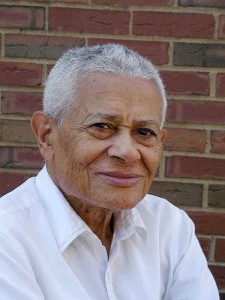 We spend the hour remembering the pioneering journalist William Worthy, who died earlier this month at the age of 92. During the height of the Cold War, Worthy defied the U.S. government by reporting from the Soviet Union, Cuba, China, Iran, North Vietnam and Algeria. He also worked closely with many African-American leaders, including A. Philip Randolph and Malcolm X. In the late 1950s, the State Department refused to renew his passport after he returned from a reporting trip into China. Despite not having a passport, Worthy traveled to Cuba in 1961 — two years after the Cuban revolution — and interviewed Fidel Castro. He was arrested upon returning to the United States — not for traveling to Cuba but for entering the United States illegally — an American citizen without a passport. The ordeal became the subject of Phil Ochs’ song, “The Ballad of William Worthy.” In 1981, Worthy traveled to Iran, two years after the revolution ousted the U.S.-backed Shah, resulting in a series of blockbuster exposés about U.S. actions in Iran.

“For this generation of younger journalists who are coming of age in the era of the Edward Snowden documents, WikiLeaks, of the government surveillance on the metadata of journalists and many millions of people in this country and around the world, I would say that William Worthy is the single most important journalist that they’ve never heard of,” said investigative journalist Jeremy Scahill, who considered Worthy a mentor. “If Bill Worthy was a white journalist, and not been an African-American journalist, he would be much better known than he is right now.” We air excerpts of our 1998 interview with Worthy and speak to Scahill, former Washington Post reporter Scott Armstrong, and Randy Goodman, a photojournalist who worked and traveled with Worthy throughout the 1980’s.

Special thanks to photojournalist Randy H. Goodman for her photos of William Worthy, Iran and associated images.