You are here: Home / Events / World Events / Why the Louisiana Flood Happened

Why the Louisiana Flood Happened 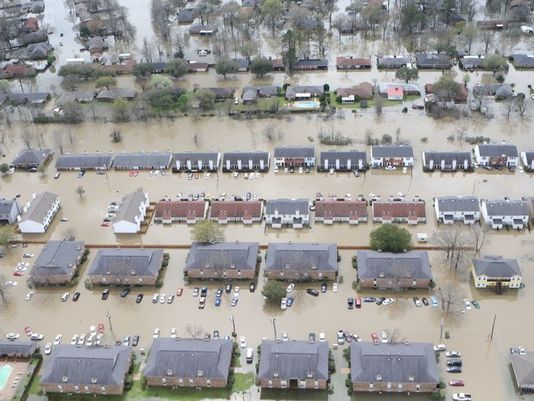 We lost everything during the historic flood in Louisiana! Our house, cars and every personal belonging are under water. We appreciate your support, anything will help us through this tough time.Thanks all!

Why the Louisiana Flood Happened, And 4 Other Things to Know by Chris Dolce 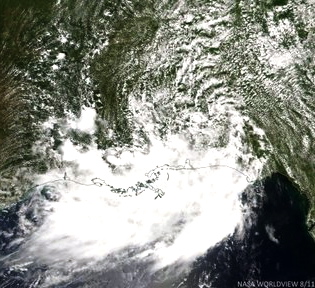 Deep, tropical moisture in combination with low pressure near the earth’s surface and aloft were the main ingredients that fueled the serious flooding in Louisiana and adjacent parts of southwest Mississippi.

On Friday morning, NOAA’s Weather Prediction Center said this when talking about the heavy rain event: “The best description of this system is that of an inland sheared tropical depression.”

The rainfall it produced was indeed very similar to what one would expect from a slow-moving tropical depression or storm since rainfall potential is related to the forward speed of those types of systems. 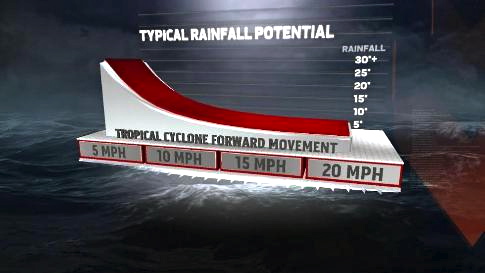 This graph shows that the slower the forward speed of a tropical cyclone, the higher the potential for extreme rainfall amounts.

Rainfall totals in the double digits from slow-moving tropical depressions or storms can wreak extreme havoc on a region. Rivers can rise rapidly and easily exceed flood levels by a wide margin, inundating homes and businesses and in some cases making travel impossible. We’ve seen all of that happen in Louisiana and southwest Mississippi.

More evidence for how this situation was similar to an inland tropical depression is the amount of moisture that was in the atmosphere.

A weather forecast discussion from the National Weather Service in New Orleans Friday morning said that the moisture content in the atmosphere was higher than what has been observed there during some tropical cyclones. It was even close to an all-time record for the area, they added.

When that much moisture is available in the atmosphere, thunderstorms can produce excessive rainfall of several inches in a single hour, leading to astronomical totals over time.

While no one likely forecasted 24+ inches of rain ahead of this event like we saw in southeast Louisiana, this is the type of thing that can happen on a very localized scale in situations like this one.

The moisture was pulled in by the aforementioned surface low pressure system which actually intensified as it moved from near the Alabama coast to northwest Louisiana Aug. 11-13, according to Dr. Jeff Masters of wunderground.com.

More than a half dozen river gauges have set new record highs in southeast Louisiana, exceeding the previous record by several feet in some cases.

One of the most extreme of those was in Magnolia, Louisiana, where the Amite River crested at 58.56 feet. This topped the old record at that location by more than six feet set on April 23, 1977.

The Amite River in Denham Springs hit 4.7 feet above its previous record set in 1983 on Sunday morning. Records there date back to at least 1921, making this an impressive feat.

3.) More Rain Fell Than Los Angeles Has Seen in 3+ Years

Since the start of 2012, Los Angeles has seen a total of 29.18 inches of rain. In just a few days time, Watson, Louisiana, picked up two inches more than that amount with 31.39 inches of rain during the event.

Obviously, this is a bit of an apples to oranges comparison since Los Angeles has a drier climate than the Gulf Coast states, but still impressive. Los Angeles averages nearly 15 inches of rain annually while Baton Rouge, which is located near Watson, sees about 60 inches of rain each year.

The National Weather Service in Hanford, California, says the amount of rain that fell in parts of southeast Louisiana exceeds what Bakersfield, California, has seen in 5+ years.

Watson, Louisiana, also saw more rainfall during this event than what Omaha, Nebraska (31.10 inches), and Minneapolis-St. Paul (30.57 inches) average for an entire year. 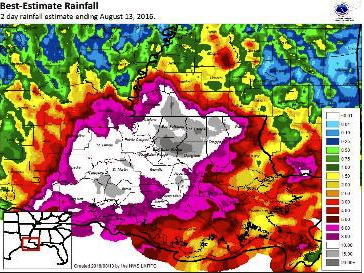 This is the second time in a matter of months that Louisiana has seen more than 24 inches of rain from a single event.

Almost 27 inches of rain fell south-southeast of Monroe, Louisiana, on March 8-11, 2016. The official airport reporting station in Monroe picked up 20.66 inches of rain.

Record flooding was observed on five river gauges in parts of the state, also topping the previous records by several feet.

5.) Flood Threat Not Over as Tropical Moisture Expands

The potential for heavy rain and flooding will continue the next few days as the tropical moisture expands northward from the Gulf Coast and interacts with a stalled frontal boundary.

Additional locally heavy rain will impact parts of the Gulf Coast, including southeast Texas and west Louisiana, though amounts will not be nearly as heavy as what we’ve seen the last few days.

Farther north, areas from Arkansas to southeast Missouri, southern Illinois, Indiana, Ohio and lower Michigan will see the potential for flooding increase early this week. This will particularly be the case in areas already saturated by rain this weekend.

Some locally heavy rain could also impact parts of the Northeast, leading to isolated flooding, even though conditions have been dry recently.

Rainfall Forecast – Locally higher amounts are possible where rain and thunderstorms stall or move along the same path for periods of time.