You are here: Home / Education / Kid's Corner K-12 / When is Thanksgiving? Colonizing America

When is Thanksgiving? Colonizing America 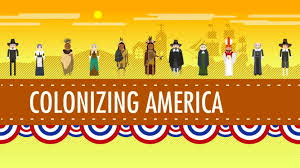 When is Thanksgiving? Colonizing America: Crash Course US History #2

In which John Green teaches you about the (English) colonies in what is now the United States. He covers the first permanent English colony at Jamestown, Virginia, the various theocracies in Massachusetts, the feudal kingdom in Maryland, and even a bit about the spooky lost colony at Roanoke Island. What were the English doing in America, anyway? Lots of stuff. In Virginia, the colonists were largely there to make money. In Maryland, the idea was to create a a colony for Catholics who wanted to be serfs of the Lords Baltimore. In Massachusetts, the Pilgrims and Puritans came to America to find a place where they could freely persecute those who didn’t share their beliefs. But there was a healthy profit motive in Massachusetts as well. Profits were thin at first, and so were the colonists. Trouble growing food and trouble with the natives kept the early colonies from success. Before long though, the colonists started cultivating tobacco, which was a win for everyone involved if you ignore the lung cancer angle. So kick back, light up a smoke, and learn how America became profitable.