You are here: Home / Collection / Education / What You Didn’t Know About Why History Repeats Itself: Wilmington’s Life: The Murderous Coup of 1898 and The Rise of White Supermacy

What You Didn’t Know About Why History Repeats Itself: Wilmington’s Life: The Murderous Coup of 1898 and The Rise of White Supermacy 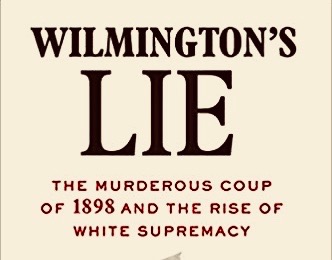 This is FRESH AIR. I’m Terry Gross. The American South in the post-Reconstruction era was a land of broken promises and brutal oppression for African Americans, as white leaders stripped former slaves of many of the civil and voting rights they’d won after the Civil War. But in the 1890s, the port city of Wilmington, N.C., was an exception. It had a thriving black middle class, a large black electorate and a local government that included black aldermen, police officers and magistrates.

That ended in 1898 with a bloody campaign of violence and intimidation by white supremacists, which our guest journalist David Zucchino calls America’s first and only armed overthrow of a legally elected government. Zucchino chronicles the events in a new book called “Wilmington’s Lie: The Murderous Coup Of 1898 And The Rise Of White Supremacy.” David Zucchino is a contributing writer for The New York Times. He’s covered war and civil conflicts in more than three dozen countries and was awarded the Pulitzer Prize for his reporting from apartheid South Africa. He spoke with FRESH AIR’s Dave Davies.

DAVE DAVIES, BYLINE: Well, David Zucchino, welcome to FRESH AIR. This is an amazing story. And it’s set in Wilmington, N.C., in the 1890s. It’s a coastal city, then the largest city in North Carolina – right? – and remarkable for the status that African Americans held at that city at a, you know – which was a city in the Deep South. Give us a sense of where black citizens stood in Wilmington then.

DAVID ZUCCHINO: Wilmington was really an outlier. It was really a unique city in the South at that time. It was – first of all, it was a majority black city, and it was probably one of the very, very few major cities in the South that had a black majority. It was 56% black. There was a multiracial government at the time, where blacks served in positions of power, and that was extremely rare in the South at that time. There were three black aldermen. There were 10 black policemen. There were black magistrates. There was a daily black newspaper, which was very unusual in the South. There weren’t that many because the white media really dominated.

This was, really, more than the white supremacists could bear. They had been in power in North Carolina since Reconstruction but had lost control of Wilmington and the state Legislature in 1894 through a combination of the Populist Party, which was made up of poor whites, abandoning the Democratic Party and going over to the Republican Party and aligning themselves with not only white republicans but black Republicans, and the blacks were the ones that had put the Republicans in power.

And so that’s how they had reached this status in Wilmington with a burgeoning black middle class, with black doctors, black lawyers, black professionals. It was quite an unusual situation and, again, something that white supremacists were not going to allow to stand. To learn more go to the link below: