You are here: Home / Education / United States of America / Virginia 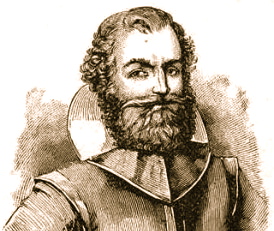 Despite themselves, some of the first colonists in the United States survived. Here’s how.  Check out http://www.HippoCampus.org for more history lessons and other homework help. 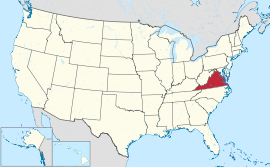 i/vərˈdʒɪnjə/), officially the Commonwealth of Virginia, is a U.S. statelocated in the South Atlantic region of the United States. Virginia is nicknamed the “Old Dominion” and sometimes the “Mother of Presidents” after the eight U.S. presidents born there. The geography and climate of the Commonwealth are shaped by the Blue Ridge Mountains and the Chesapeake Bay, which provide habitat for much of its flora and fauna. The capital of the Commonwealth is Richmond; Virginia Beach is the most populous city and Fairfax County the most populous political subdivision. The Commonwealth’s population is over eight million.

The area’s history begins with several indigenous groups, including the Powhatan.  In 1607 the London Company established the Colony of Virginia as the first permanent New World English colony. Slave labor and the land acquired from displaced Native American tribes each played a significant role in the colony’s early politics and plantation economy. Virginia was one of the 13 Colonies in the American Revolution and joined the Confederacy in the American Civil War, during which Richmond was made the Confederate capital and Virginia’s northwestern counties separated to form the state of West Virginia. Although the Commonwealth was under conservative single-party rule for nearly a century following Reconstruction, both major national parties are competitive in modern Virginia.

The Virginia General Assembly is the oldest legislature in the Western Hemisphere. The state government has been repeatedly ranked most effective by the Pew Center on the States.   It is unique in how it treats cities and counties equally, manages local roads, and prohibits its governors from serving consecutive terms. Virginia’s economy has many sectors: agriculture in the Shenandoah Valley; federal agencies in Northern Virginia, including the headquarters of the Department of Defense and CIA; and military facilities in Hampton Roads, the site of the region’s main seaport. Virginia’s public schools and many colleges and universities have contributed to growing media and technology sectors. As a result, computer chips have become the state’s leading export. 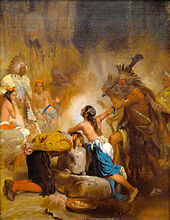 The story of Pocahontas, an ancestress of many of the First Families of Virginia, was romanticized by later artists.

Jamestown 2007 marked Virginia’s quadricentennial year, celebrating 400 years since the establishment of the Jamestown Colony. The celebrations highlighted contributions from Native Americans, Europeans, and Africans, each of which had a significant part in shaping Virginia’s history. Warfare, including among these groups, has also had an important role. Virginia was a focal point in conflicts from the French and Indian War, the American Revolution and the Civil War, to the Cold War and the War on Terrorism.   Stories about historic figures, such as those surrounding Pocahontas and John Smith, George Washington‘s childhood, or the plantation elite in the slave society of the antebellum period, have also created potent myths of state history, and have served as rationales for Virginia’s ideology.

The first people are estimated to have arrived in Virginia over 12,000 years ago.  By 5,000 years ago more permanent settlements emerged, and farming began by 900 AD. By 1500, the Algonquian peoples had founded towns such as Werowocomoco in the Tidewater region, which they referred to as Tsenacommacah. The other major language groups in the area were the Siouan to the west, and the Iroquoians, who included the Nottoway and Meherrin, to the north and south. After 1570, the Algonquians consolidated under Chief Powhatan in response to threats from these other groups on their trade network.   Powhatan controlled more than 30 smaller tribes and over 150 settlements, who shared a common Virginia Algonquian language. In 1607, the native Tidewater population was between 13,000 to 14,000.

Several European expeditions, including a group of Spanish Jesuits, explored the Chesapeake Bay during the 16th century. In 1583, Queen Elizabeth I of England granted Walter Raleigh a charter to plant a colony north of Spanish Florida.  In 1584, Raleigh sent an expedition to the Atlantic coast of North America.  The name “Virginia” may have been suggested then by Raleigh or Elizabeth, perhaps noting her status as the “Virgin Queen”, and may also be related to a native phrase, “Wingandacoa”, or name, “Wingina.”  Initially the name applied to the entire coastal region from South Carolina to Maine, plus the island of Bermuda.  The London Company was incorporated as a joint stock company by the proprietary Charter of 1606, which granted land rights to this area. The Company financed the first permanent English settlement in the “New World“, Jamestown. Named for King James I, it was founded in May 1607 by Christopher Newport.   In 1619, colonists took greater control with an elected legislature called the House of Burgesses. With the bankruptcy of the London Company in 1624, the settlement was taken into royal authority as a British crown colony.

Life in the colony was perilous, and many died during the “starving time” in 1609 and theAnglo-Powhatan Wars, including the Indian massacre of 1622, which fostered the colonists’ negative view of all tribes.  By 1624, only 3,400 of the 6,000 early settlers had survived.  However, European demand for tobacco fueled the arrival of more settlers and servants.  The headright system tried to solve the labor shortage by providing colonists with land for each indentured servant they transported to Virginia.  African workers were first imported in 1619, and their slavery was codified after a 1654 lawsuit over the servant John Casor.

Tensions and the geographic differences between the working and ruling classes led to Bacon’s Rebellion in 1676, by which time current and former indentured servants made up as much as 80% of the population.  Rebels, largely from the colony’s frontier, were also opposed to the conciliatory policy towards native tribes. Colonists appropriated tribal land by force and treaty, including the Treaty of 1677, which made the signatory tribes tributary states. Williamsburg became the colonial capital in 1699, following the founding of The College of William & Mary in 1693.   In 1747, a group of Virginian speculators formed the Ohio Company, with the backing of the British crown, to start English settlement and trade in the Ohio Country west of the Appalachian Mountains.   France, which claimed this area as part of their colony of New France, viewed this as a threat, and the ensuing French and Indian War became part of the Seven Years’ War (1756–1763). A militia from several British colonies, called the Virginia Regiment, was led by then-Lieutenant colonel George Washington. 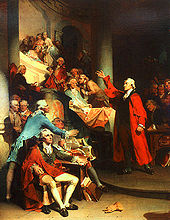 The British Parliament’s efforts to levy new taxes following the French and Indian War were deeply unpopular in the colonies. In the House of Burgesses, opposition to taxation without representationwas led by Patrick Henry and Richard Henry Lee, among others.   Virginians began to coordinate their actions with other colonies in 1773, and sent delegates to the Continental Congress the following year.   After the House of Burgesses was dissolved by the royal governor in 1774, Virginia’s revolutionary leaders continued to govern via the Virginia Conventions. On May 15, 1776, the Convention declared Virginia’s independence from the British Empire and adopted George Mason‘s Virginia Declaration of Rights, which was then included in a new constitution.  Another Virginian, Thomas Jefferson, drew upon Mason’s work in drafting the national Declaration of Independence.

When the American Revolutionary War began, George Washington was selected to head the colonial army. During the war, the capital was moved to Richmond at the urging of Governor Thomas Jefferson, who feared that Williamsburg’s location would make it vulnerable to British attack.  In 1781, the combined action of Continental and French land and naval forces trapped the British army on the Virginia Peninsula, where troops under George Washington and Comte de Rochambeaudefeated British General Cornwallis in the Siege of Yorktown. His surrender on October 19, 1781, led to peace negotiations in Paris and secured the independence of the colonies.

Virginians were instrumental in writing the United States Constitution. James Madison drafted the Virginia Plan in 1787 and the Bill of Rights in 1789.   Virginia ratified the Constitution on June 25, 1788. The three-fifths compromise ensured that Virginia, with its large number of slaves, initially had the largest bloc in the House of Representatives. Together with the Virginia dynasty of presidents, this gave the Commonwealth national importance. In 1790, both Virginia and Maryland ceded territory to form the new District of Columbia, though the Virginian area was retroceded in 1846.   Virginia is sometimes called “Mother of States” because of its role in being carved into states like Kentucky, which became the 15th state in 1792, and for the numbers of American pioneers born in Virginia.