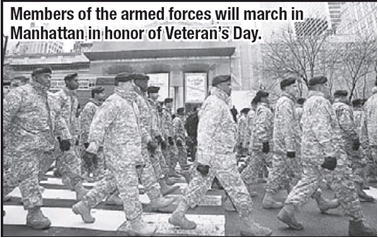 November 11 is a day of profound historical significance for the United States.

The long, brutal war had come to be known as the Great Warâ€ and the War to End All Wars. People around the world vowed that a war of that scale would never happen again.

Several years later, on November 11, 1921, the remains of a soldier who had died fighting World War I, his identity known only to God, was buried on a hilltop in Arlington, VA, overlooking the Potomac River across from Washington, DC.

The interment of the Unknown Soldier was intended to bestow the ultimate honor and dignity upon the war dead and mirror the creation of similar symbolic tombs in Britain and France.

Each year on Veterans Day, the president of the US lays a wreath at the Tomb of the Unknown Soldier on November 11th.

In 1926, Congress officially proclaimed November 11th Armistice Day. But the hard won peace that those who had lived through the Great War so cherished would not last.

In 1939, World War again erupted in Europe, and by 1941, the US had also entered the war. The war raged on until 1945, requiring the largest mobilization of American forces in US history.

Unlike Memorial Day, which honors the war dead, Veterans Day recognizes all people, living and dead, who have ever served in a branch of the US Armed Forces.

In the US today, about 24 million men and women are military veterans. About 18 million veterans have fought in wars and armed conflict; others have served during peace time; some have been stationed overseas, others fulfilled their duty to their country without leaving American soil.

More than 1.8 million living military veterans are women. The American military is known as the mightiest fighting force in the world, but it also functions as the greatest disaster relief and humanitarian-assistance force in the world.

US military personnel build hospitals and schools and dig wells, rescue people from earthquakes and loads, deliver food and supplies to the victims of disasters and war, provide medical treatment, and keep the peace.

Many of the veterans we will honor today will have served in the conflicts in Iraq and Afghanistan. This summer, American combat troops officially withdrew from Iraq, but the war in Afghanistan rages on, and our soldiers continue to put their lives in extraordinary danger.

More than 1.4 million military men and women are on active duty. Today, we have the chance to express our gratitude and appreciation for their extraordinary bravery.

Picture Above: Members of the armed forces will march in Manhattan in honor of Veterans Day.