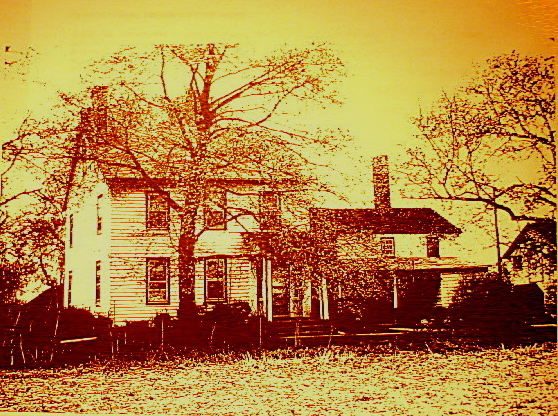 The farmhouse, built in 1713 by Simon Van Dyke, whose ancestor Jan Thomassen Van Dyke immigrated to New Amsterdam from Holland in 1652. The house is intact and occupied by a tenant/caretaker. A carriage house is also in good condition. Of the numerous barns once on the farm, one still stands in poor to fair condition. The family owned slaves, and original slave quarters are still intact over the farmhouses kitchen. The slaves and family lived together, not separately.

A family cemetery, with gravestones, is located on the farm. A Revolutionary War soldier is buried there with his family. All of the graves predate 1859, a requirement for historical preservation.

A slave cemetery is located near the family plot at the right of the end of the lane as you approached the Davidsons Mill Road, as sworn to by one of the last surviving members of the Vandyke family. That member of the family remembers the patch of land on the edge of the property as the homes slave cemetery and has records that prove slaves once worked the land. A bill of sale found inside the family home documents the 1813 purchase of a slave name Amy, by the Petti family for $150. Amy had about five children, Alfred (born July 19, 1823), Rose (born September 17, 1825), Sylvester (born June 7, 1827) and/or Herman (born June 22, 1829. And its a real possibility that she and maybe some of her children are in that graveyard. There were still wood markers there that have long since disappeared and the family at Vandyke Farm believes that when the road was widened the graveyard was dug up. However, the cemetery was covered by an earthen roadway overpass ramp in the early 1980’s. There is a good chance that the graves were not disturbed, but covered with abut 8ft. of earth. The New Jersey Turnpike Authority did this travesty despite protest by Arthur Vandyke, who no longer even owned the property.

In the 1800’s, slaves comprised 7.6 percent of the population of New Jersey and many were active in the Revolutionary War, little known facts not widely taught in schools. The 200 acres of land is right next to Pigeon Swamp State Park, and would be a perfect addition to this ecological wonder. The land is still farmed as it was for the last 300 years. A farmer leases the land for growing corn that is processed as a biofuel additive for gasoline.

The farm is an amazing piece of early New Jersey history and that of America itself. It has withstood the centuries and must not be destroyed for the sake of just another builders development. It is in imminent danger and we are desperate for help.

The family cemetery plot meets the criteria for historic preservation but it does not yet have that status. The African-American cemetery needs to be investigated, and if confirmed, moved to another location on the farm. They built it and worked it.

1817- Thomas Titus is manumitted by his master Geradus Beekman

1818-  On August 3rd Thomas Titus Jr. is manumitted by his master Geradus Beekman.

1819-  Thomas Titus dies at 65 years old and buried on the family farm.  Thomas Jr. and Wife Sarah takes over farm.

1859-  Charlotte dies suddenly and wills the farm to her son Allen Hooper and wife Janey and son Arthur.

1876-  Sarah moves in with grandson Gertrude Raddle of nearby Plainsboro dies.

1870-  Allen Hooper sells the farm to Christopher Columbus Beekman for $480.

The Property includes corncrib, outhouse, smoke house, chicken coop, barn, shed, tool shed with very old tools.  A steam generator and very old wagon, possibly one in Thomas Jr. inventory 1849.  No historic search of structures or equipment has been done.  Property is now owned by South Brunswick Township and has a clause of no building on land.  I have seen the bill of sale between Titus and Van Dyke.  I have a copy of the will, which releases Thomas Titus.  The manumission written for Thomas Jr.  The headstone for Thomas is in the public works building in a broom closet.  Thomas Jr.s will.  Charlottes will.  Deed of sale between Allen and Christopher C. Beekman.