You are here: Home / Education / Women Who Made History / US women’s soccer team will be celebrated in a ticker tape parade in New York after making history 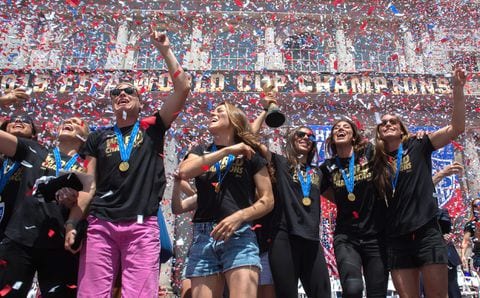 (CNN)The US Women’s National Team’s victory tour will continue with a ticker tape parade in New York City on Wednesday. The soccer team won its second consecutive FIFA Women’s World Cup when it beat the Netherlands 2-0 on Sunday during the match in France. Megan Rapinoe scored a penalty goal in the second half, giving the team a 1-0 lead, and Rose Lavelle added a second score with a shot in the 69th minute. New York City Mayor Bill de Blasio announced the ticker tape parade after the victory.

The ticker tape parade will start at 9:30 a.m. from Battery Park and head north along Broadway to City Hall, according to the mayor’s office. The mayor is also scheduled to honor the team at City Hall. To read more go to the link below: