You are here: Home / Democracy Now! / Media / Untold History of the United States

Untold History of the United States

Oliver Stone on the Untold U.S. History from the Atomic Age to Vietnam to Obama’s Drone Wars 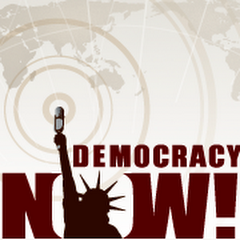 Academy Award-winning Oliver Stone has teamed up with historian Peter Kuznick to produce a 10-part Showtime series called “Oliver Stone’s Untold History of the United States.” Drawing on archival findings and recently declassified documents, the filmmakers critically examine U.S. history, from the atomic bombing of Japan to the Cold War, to the fall of communism, and continuing all the way through to the Obama administration. Contrary to what’s taught in schools across the country, the filmmakers found the atomic bombings of Hiroshima and Nagasaki were militarily unnecessary and morally indefensible. They also suggest the Soviet Union, not the United States, ultimately defeated the Germans in World War II. And, they assert, the United States, not the Soviet Union, bore the lion’s share of responsibility for perpetuating the Cold War. The filmmakers also found U.S. presidents, especially in wartime, have frequently trampled on the Constitution and international law, and they note the United States has brought the world dangerously close to nuclear war by repeatedly brandishing nuclear threats. The first episode of the series aired Monday night on Showtime. For more about this series and the companion book, we are joined by Stone and Kuznick. Click here for Part 2 of this interview. [includes rush transcript]

TRANSCRIPT: This is a rush transcript. Copy may not be in its final form.

JUAN GONZÁLEZ: We turn now to the untold history of the United States. Academy Award-winning filmmaker Oliver Stone has taken on three American presidents in JFK, Nixon and W. A Vietnam War veteran, he was decorated with a Bronze Star and a Purple Heart. As a filmmaker, he’s tackled the most controversial aspects of the war, of the Vietnam war, in his classics Platoonand Born on the Fourth of July. He revealed the greed of the financial industry in the Hollywood hit Wall Street and the sequel,Wall Street 2: Money Never Sleeps. And he’s explored Latin America through his films Salvador, Comandante and South of the Border.

AMY GOODMAN: Now Oliver Stone and historian Peter Kuznick from American University have teamed up to produce a 10-part Showtime series called Oliver Stone’s Untold History of the United States. It also features a companion book with a similar name. Drawing on archival findings and recently declassified documents, the filmmakers critically examine U.S. history, from the atomic bombing of Japan to the Cold War, to the fall of communism, and continuing all the way through to the Obama administration. This is the trailer for the Showtime mini-series.

“OLIVER STONE: History is exciting, and I want to make it as exciting as it can be. We take a history subject, and we make it not only dramatic, but we are compassionate. I always felt there’s a disconnect about what’s officially reported and what actually happened. We can’t accept the stuff that’s handed down. This is the key to the whole series, is to find out how we got to where we are and who we are. It’s great, great story.”

AMY GOODMAN: That was the trailer for Oliver Stone and Peter Kuznick’s 10-part Showtime series called The Untold History of the United States. The first episode of the series aired on Monday night on Showtime. It’ll re-air on Monday evenings at 8:00 p.m., is also available on demand.

For more, the award-winning director Oliver Stone joins us here in New York, and we’re joined by his co-author, Peter Kuznick, professor of history and director of the Nuclear Studies Institute at American University.

We welcome you both to Democracy Now! Oliver Stone, you’ve been working on this for years, unbeknownst to many people. Why?