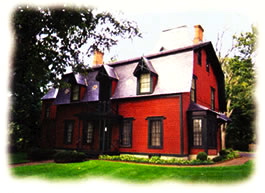 Plainﬁeld’s historic link with its past, was built in 1746 by Isaac Drake as a home for his son, Nathaniel. Today it is a city-owned public museum administered by the Historical Society of Plainﬁeld.

It was at the Drake House that George Washington consulted with his officers during and after the Battle of Short Hills fought over the entire Plainﬁeld area on June 25-27, 1777. Nathaniel Drake, his wife, Dorothy, and his daughters Sarah and Phebe, were all patriots. The sons of the family, Abraham, Cornelius and Isaac, served in the Essex and Somerset Counties militia, and their freed slave, Caesar, was a wagoner with the Continental forces. Washington and his officers were often entertained here when they were in the area on military maneuvers.

The original farmhouse was a typical New Jersey one- and-a-half-story building with four rooms and a lean-to kitchen on the first floor, and a loft above. In 1864, it was purchased from the Drake family by John S. Harberger of New York City, president of the Manhattan Banking Company, which later became the Chase Manhattan Bank. Harberger made many architectural changes in accordance with current Victorian tastes. He extended the downstairs hall, and added the library. By raising the roof, he made the loft into a music room, and the towers he built completed the architectural style we see today.

In the Drake House, the first-floor kitchen, bedroom and dining room are typical of those in homes of the 18th century. Parlor furnishings represent the late Empire and early Victorian time.

The Van Wyck Brooks District is the largest of the historic districts and is famous for the stunning brick Victorian homes that capture the exuberance of the “High Victorian Era.” Also characteristic of this district are the many outbuildings, such as stables and carriage barns. Pulitzer Prize-winning author Van Wyck Brooks spent his formative years in this neighborhood.

The Netherwood Heights District is another early planned residential suburb. It was laid out with streets following the natural contours of the hilly terrain. This Late-Victorian development included the Netherwood Hotel and several country estates built from 1876 to 1900. Tudor Revival homes in the district were built in a second wave of construction in the 1920’s.

The North Avenue Commercial District is the only commercial district in Plainfield. This seven-block area surrounding the Plainfield Railroad Station contains historic structures built between 1850 and 1890, and the Society of Friends Meeting House, main Post Office and United Trust Bank.

The Plainfield Civic District is described on the New Jersey Register of Historic Places as a very good example of the “City Beautiful Movement” of the early 1900’s. Notable structures include the 1917-18 Georgian Revival City Hall; the 1922 Neoclassical Revival YMCA; the War Monument in the City’s triangle at Seventh St. and Watchung Ave.; and the 1929 Jacobean Revival City Hall Annex. The Annex was built for offices, library and museum by the Seventh Day Baptist; it was purchased and renovated by the City of Plainfield in 1983.

The Society of Friends (Quaker) Meeting House – Built in 1788, this simple shingled, wrought-nail building is the oldest continuous house of worship in Plainfield. An old burial ground is in the rear. Watchung Ave. at E. Third St.

Shady Rest was the first African-American golf and country club in the United States. There were other black-owned or operated golf courses at the time, but none combined golf with other amenities typically associated with country club life, such as tennis, horseback riding, locker rooms and a dining room, according to Lawrence Londino, a Montclair State University professor who produced a documentary called “A Place For Us” about Shady Rest, and John Shippen, the resident golf pro who is believed to have been the first American-born golfer to play in the U.S. Open.

“I guess we didn’t at the time, but now we know how important it was,” says Annie Westbrook Brantley, 88, of Roselle, who grew up near Shady Rest and who met her husband there in 1938, while Duke Ellington played “One O’Clock Jump.”

The clubhouse, which dates to the mid-1700s, began life as a farmhouse. It briefly served as a tavern until 1900, when the Westfield Golf Club turned the surrounding farmland into a golf course, according to Ethel Washington, the history programs coordinator for the Union County Division of Cultural and Heritage Affairs.

When the Westfield club merged with a Cranford club, plans were drawn to build a new 18-hole course at what would become the Echo Lake Country Club. A group of African-American investors called the Progressive Realty Co. bought the property in 1921 and opened Shady Rest.

The Jerseyland neighborhood around the club was predominantly African-American, but the club drew members from across northern and central Jersey, with guests driving in from as far as Manhattan and Brooklyn for a day in the country.