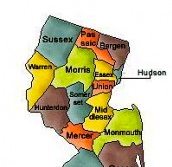 New Jersey is about the same size as Belgium, or Israel or Switzerland.
(SFEC, 2/14/99, Z1 p.8)(SSFC, 10/9/05, Par p.27)
The original inhabitants of Absecon Island, on which Atlantic City rests, were the Lenni-Lenape Indians. The Lenni-Lenapes would travel over the Old Indian Trail from the Mainland to the island to spend the summer months. The trail, which was located approximately where Florida Ave. is today, was five miles long over the marshland. The Indians would partake of the abundance the ocean and bay had to offer, along with the varieties of wildlife and flora of the island. www.cityofatlanticcity.org/con_abo_history.asp