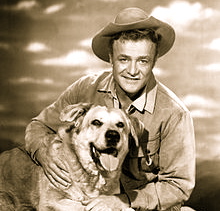 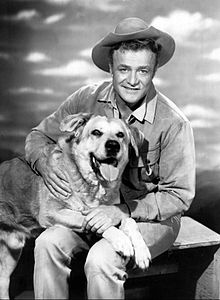 Brian Keith as Dave Blassingame and Spike as Brown, 1960

The Westerner is a highbrow American Western series that aired on NBC from September 30 to December 30, 1960. Created and produced by Sam Peckinpah, who also directed some episodes, the series was a Four Star Television production. The Westernerstars Brian Keith as amiable, unexceptional cowhand/drifter Dave Blassingame, and features John Dehner as rakish Burgundy Smith, who appeared in three episodes.

The pilot for The Westerner appeared on CBS‘s Dick Powell’s Zane Grey Theater. The musical score was largely the work of Four Star’s Herschel Burke Gilbert. For rerun syndication, it was grouped with three other short-lived Western series from the same company, Black Saddle starring Peter Breck, Johnny Ringo starring Don Durant, and Law of the Plainsman starring Michael Ansara, under the umbrella title The Westerners, bracketed with hosting sequences featuring Keenan Wynn. 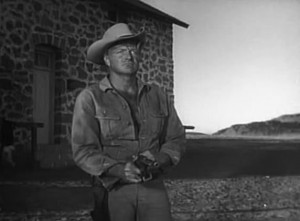 Blassingame was realistically portrayed as a basically decent, ordinary man who was handy with a gun. Not particularly bright, illiterate and occasionally amoral, he felt no compunction about being seduced by another man’s wife or absconding with a long-lost government payroll (abandoning his dog Brown along the way). Brown was played by Spike, who was trained by Frank Weatherwax and is best known for playing the title role in Old Yeller. Brown figured prominently in a number of episodes, appeared in all of them, and was always seen faithfully following Blassingame in the end credits. 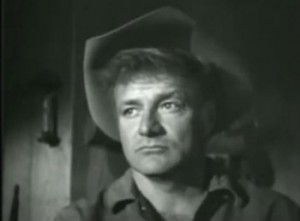