You are here: Home / Education / Senior's Corner / The Secret of Smith’s Hill

The Secret of Smith’s Hill 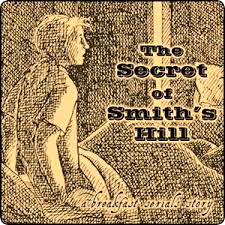 CESSMI,” muttered James while Sam pulled Clemmie away and shut her in the truck. “Cessmi. It doesn’t sound like anything.” “it looks like part of a name, though,” Kelly said. “It also looks like the same kind of stone as the 782 one. Which,” she added, “goes along with my idea that 782 could be a house number.”

“House numbers are usually on houses,” James said stubbornly. “Not carved like they are on gravestones…. Oh, wow!”

“A gravestone,” Kelly whispered. “Holy smoke.” She walked away from the foundation and sat down under a tree. James sat beside her.

“And a grave,” Kelly said triumphantly, “proves that it’s a ghost we’re dealing with!”

“I guess it could,” James said slowly. “If there are ghosts. But even if we’ve found part of an old gravestone, there doesn’t have to be any connection between it and anything else.”

Kelly sighed. “No,” she said. “There doesn’t. But I think we should act as if there is and go on trying to figure it out. Let’s say there are ghosts and it’s FS’S gravestone. Whoa, James!” She punched his arm. “SMI’S got to be the beginning of a last name. The second initial on the locket is S. So there could be a connection to the locket!”

“SMI,” James said in a hushed voice, “could be part of Smith–as in Smith’s Hill!”

“James,” Kelly asked suddenly, thinking of the diary, “when exactly was the American Revolution?” “1776,” James said. “Wasn’t it?” An hour later Kelly and James got permission to hitch a ride to town with Sam, who was going to the hardware store.

“Clementine sure seems to want to dig in that corner,” Kelly said as she and James climbed into Sam’s truck.

“She sure does.” Sam drove out onto the road. “It’s like there’s something there she wants, but she’s spooked about it. She sure was spooked by that horseshoe.”

“We’ve found something else.” Kelly dug the stone fragments out of her pocket. “Can I see if she’s spooked by these, too?”

“Sure. Just hang onto her collar in case she jumps around. What are they, anyway?” Kelly showed them to him, and then to Clemmie, who seemed curious, but whimpered.

“They look like part of an old gravestone,” Sam observed. “Some folks used to be buried right on their property instead of in the churchyard. Maybe they didn’t like the church, or maybe it was too far to get to, I don’t know. Funny custom. I’m sure glad we don’t do that nowadays.”

“We thought we’d go to the library,” said James, “and see if we can find out more.”

“It’s the town offices you want,” Sam said. “Not the library. I’ll drop you off.”

A few minutes later, Kelly and James were standing in a small office with TOWN RECORDS stenciled on its door.

“Smith’s Hill,” said a small, gray-haired woman at a desk on which there was a sign saying AMELIA BABSON, TOWN CLERK. “Why, yes. There were generations of Smiths there. That’s how it got its name.”

“That’s when the Declaration of Independence was signed,” said Ms. Babson. “But the Revolution started before then and didn’t end until… let’s see. The English general, Cornwallis, surrendered at Yorktown in October 1781, but the war didn’t end officially for another couple of years.”

“We found these.” Kelly produced both stone fragments. “Couldn’t that be Smith? And 1782? A date?”

And there, under “S,” was the following entry: Frances Smith, Smith’s Hill–January