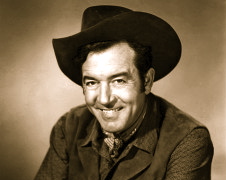 Season 2. Ep 12. Vint kills a man in self-defence after he and the sheriff are both shot but the man’s sister is misinformed that her brother was shot in the back and decides Vint must die. ***There’s a very young-looking Robert Fuller in this one. 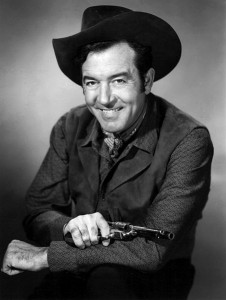 The Restless Gun is an American western television series that appeared on NBC between 1957 and 1959, with John Payne in the role of Vint Bonner, a wandering cowboyin the era after the American Civil War. A skilled gunfighter, Bonner is an idealistic person who prefers peaceful resolutions of conflict wherever possible. He is gregarious, intelligent, and public-spirited. The half-hour black-and-white program aired seventy-eight episodes. Jeanne Bates appeared in varying roles with Payne in five episodes of The Restless Gun.

The Restless Gun theme song (officially titled “I Ride With the Wind”) begins: “I ride with the wind, my eyes on the sun, and my hand on my restless gun…” The song composer is probably Paul Dunlap, credited as the primary series composer, but could have been contributed to by either of the two other series composers, Dave Kahn and Stanley Wilson, also. Two versions (one a vocal) are currently posted on YouTube, but neither posting lists any composer or performance credits. 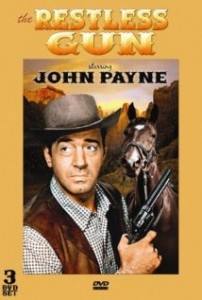 Broadcast on March 29, 1957, as an installment of the CBS anthology series The Schlitz Playhouse of Stars, the pilot episode was based on a radio series The Six Shooter, with Payne’s character named Britt Ponset.  For the television version, however, the name was changed to Vint Bonner. Some episodes were based on the radio programs.

The principal producer of The Restless Gun was David Dortort, thereafter in 1959 the executive producer of NBC’s blockbuster western hit Bonanza. Dortort did not create The Restless Gun, nor did he produce the pilot episode, and he rarely contributed original scripts. A critic who considers The Restless Gun only an average program, writes that the series “probably owes its mediocrity more to MCA, the company that ‘packaged’ the series and produced it through its television arm Revue Productions, than to Dortort.”

The Restless Gun ranked in the Top Ten during its first season on the air, ending the year at No. 8, but it was not among the highest rated programs in the second season.

Set in Texas, The Restless Gun pilot episode features Andrew Duggan, William Hopper, and Michael Landon in supporting roles. Hopper plays a former lawman from Laredo in south Texas and long-time friend of Bonner’s. Hopper’s character is being sought for revenge by Duggan, whom the lawman had sent to prison. In the episode, Bonner speaks of taking a job near Waco. 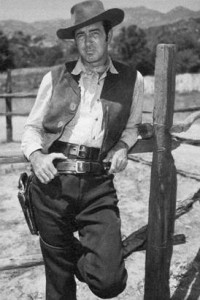 Most end titles of The Restless Gun episodes read “Based on characters created by Frank Burt,” but Burt’s name is not mentioned in the pilot episode. Nor is he listed as the “creator.”

Payne is the “executive producer” of his series, but a critic calls that designation “vanity.” Payne has sometimes been compared to actor Dick Powell, who during that same period hosted and sometimes starred in his own CBS western anthology series, Dick Powell’s Zane Grey Theater during the second half of the 1950’s.