You are here: Home / Education / Kid's Corner K-12 / The Quakers, the Dutch, and the Ladies

The Quakers, the Dutch, and the Ladies 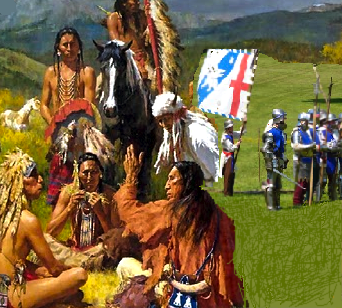 The Quakers, the Dutch, and the Ladies: Crash Course US History #4

In which John Green teaches you about some of the colonies that were not in Virginia or Massachussetts. Old New York was once New Amsterdam. Why they changed it, I can say; ENGLISH people just liked it better that way, and when the English took New Amsterdam in 1643, that’s just what they did. Before the English got there though, the colony was full of Dutch people who treated women pretty fairly, and allowed free black people to hold jobs. John also discusses Penn’s Woods, also known as Pennsylvania. Pennsylvania was (briefly) a haven of religious freedom, and William Penn dealt relatively fairly with the natives his colony displaced. Of course, as soon as Penn died, the colonist started abusing the natives immediately. We venture as far south as the Carolina colonies, where the slave labor economy was taking shape. John also takes on the idea of the classless society in America, and the beginning of the idea of the American dream. It turns out that in spite of the lofty dream that everyone had an equal shot in the new world, there were elites in the colonies. And these elites tended to be in charge. And then their kids tended to take over when they died. So yeah, not quite an egalitarian paradise. In addition to all this, we get into the Salem Witch Trials, the treatment of women in the colonies, and colonial economics. Oh yeah, one more thing, before you comment about how he says we’re talking about the American Revolution next week, but the end screen says Seven Years War, consider that perhaps the Seven Years War laid the groundwork for the revolution to happen.