You are here: Home / Education / Kid's Corner K-12 / The Natives and the English 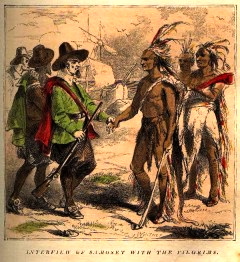 The Natives and the English – Crash Course US History #3

In which John Green teaches you about relations between the early English colonists and the native people the encountered in the New World. In short, these relations were poor. As soon as they arrived, the English were in conflict with the native people. At Jamestown, Captain John Smith briefly managed to get the colony on pretty solid footing with the local tribes, but it didn’t last, and a long series of wars with the natives ensued. This pattern would continue in US history, with settlers pushing into native lands and pushing the inhabitants further west. In this episode, you’ll learn about Wahunsunacawh (who the English called Powhatan), his daughter Pocahontas, King Philip’s (aka Metacom) War, and the Mystic Massacre. By and large, the history of the Natives and the English was not a happy one, even Thanksgiving wasn’t all it’s cracked up to be.