You are here: Home / Golden Years of Radio / Media / The Mickey Mouse Club 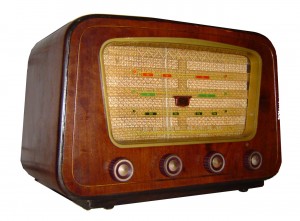 This sales film was prepared to help sell the 1962 syndication of The Mickey Mouse Club. There are clips of the major segments from each day’s programming. 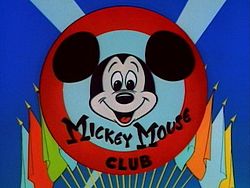 The Mickey Mouse Club is an American variety television show that aired intermittently from 1955 to 1996. Created by Walt Disney and produced by Walt Disney Productions, the program was first televised from 1955 to 1959 by ABC, featuring a regular but ever-changing cast of child performers. The series was revived, reformatted and reimagined after its initial 1955–1959 run on ABC, first in 1977 for syndication, and again, from 1989 to 1995 on the Disney Channel.

Previous to the TV series, there was a theater based Mickey Mouse Club with the first one started on January 4, 1930 12 PM at the Fox Dome Theater in Ocean Park, California with 60 Theaters hosting clubs by March 31. The Club has its first issue of the Official Bulletin of the Mickey Mouse Club published on April 15, 1930.  By 1932, the Club has 1 million members and in 1933 its first British club opens at Darlington’s Arcade Cinema. In 1935 with so many clubs around the world, Disney begins to phase out the club.

The Mickey Mouse Club was Walt Disney’s second venture into producing a television series, the first being the Walt Disney anthology television series, initially titled Disneyland. Disney used both shows to help finance and promote the building of the Disneyland theme park. Being busy with these projects and others, Disney turned The Mickey Mouse Club over to Bill Walsh to create and develop the format, initially aided by Hal Adelquist.

The result was a variety show for children, with such regular features as a newsreel, a cartoon, and a serial, as well as music, talent and comedy segments. One unique feature of the show was the Mouseketeer Roll Call, in which many (but not all) of that day’s line-up of regular performers would introduce themselves by name to the television audience. In the serials, teens faced challenges in everyday situations, often overcome by their common sense or through recourse to the advice of respected elders. Mickey Mouse himself appeared in every show not only in vintage cartoons originally made for theatrical release, but in opening, interstitial and closing segments made especially for the show. In both the vintage cartoons and in the new animated segments, Mickey was voiced by his creator Walt Disney. (Disney had previously voiced the character theatrically from 1928 to 1947, and then was replaced by sound effects artist Jimmy MacDonald). 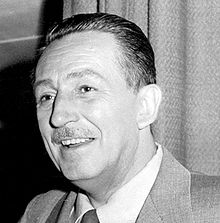 Walter Elias “Walt” Disney (December 5, 1901 – December 15, 1966) was an American film producer, director, screenwriter, voice actor, animator, entrepreneur, entertainer, international icon, and philanthropist, well known for his influence in the field of entertainment during the 20th century. Along with his brother Roy O. Disney, he was co-founder of Walt Disney Productions, which later became one of the best-known motion picture producers in the world. The corporation is now known as The Walt Disney Company and had an annual revenue of approximately US$36 billion in the 2010 financial year.

Disney is particularly noted as a film producer and a popular showman, as well as an innovator in animation and theme park design. He and his staff created some of the world’s most well-known fictional characters including Mickey Mouse, for whom Disney himself provided the original voice. During his lifetime he received four honorary Academy Awards and won 22 Academy Awards from a total of 59 nominations, including a record four in one year, giving him more awards and nominations than any other individual in history.   Disney also won seven Emmy Awards and gave his name to the Disneyland and Walt Disney World Resort theme parks in the U.S., as well as the international resorts Tokyo Disney Resort, Disneyland Paris, and Hong Kong Disneyland.

The year after his December 15, 1966 death from lung cancer in Burbank, California, construction began on Walt Disney World Resort in Florida. His brother Roy Disney inaugurated the Magic Kingdom on October 1, 1971.

Cast of The Mickey Mouse Club 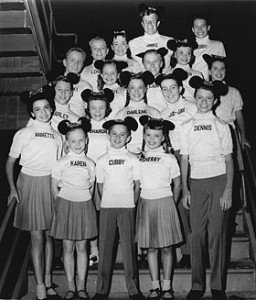 Mickey Mouse Club was hosted by Jimmie Dodd, a songwriter and the Head Mouseketeer, who provided leadership both on and off screen. In addition to his other contributions, he often provided short segments encouraging young viewers to make the right moral choices. These little homilies became known as “Doddisms.” Roy Williams, a staff artist at Disney, also appeared in the show as the Big Mooseketeer. Roy suggested the Mickey Mouse ears worn by the cast members, which he helped create, along with Chuck Keehne, Hal Adelquist, and Bill Walsh.

The main cast members were called Mouseketeers, and they performed in a variety of musical and dance numbers, as well as some informational segments. The most popular of the Mouseketeers comprised the so-called Red Team, which consisted of the following:

★ Cubby and Karen were initially “Meeseketeers” because they were the youngest of this group.

These non-Mouseketeers primarily appeared in numerous original serials filmed for the series, only some of which have appeared in reruns. Certain Mouseketeers were also featured in some of the serials, particularly Annette Funicello and Darlene Gillespie.