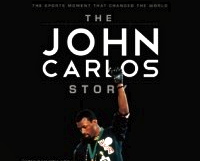 The protest that took place on top of the victory stand in Mexico City on the 16th October 1968, by US athletes Tommie Smith and John Carlos (supported by Australian Peter Norman) was one of the greatest moments in the history of the Olympics. Smith and Carlos did the unthinkable when they had the courage to make a stand against the grave injustice, impoverished conditions and societal mistreatment of their fellow humans, they stood on the podium and held up their raised gloved fists in unity and in protest of the continuing dehumanizing treatment of African Americans by the country they represented, and of the oppressed worldwide. 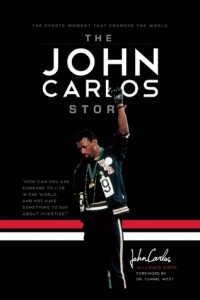 The John Carlos Story: The Sports Moment That Changed the World by Dave Zirin, Dave Zirin and Cornel West

Seen around the world, John Carlos and Tommie Smith’s Black Power salute on the 1968 Olympic podium sparked controversy and career fallout. Yet their show of defiance remains one of the most iconic images of Olympic history and the Black Power movement. Here is the remarkable story of one of the men behind the salute, lifelong activist John Carlos.

John Carlos is an African American former track and field athlete, professional football player, and a founding member of the Olympic Project for Human Rights. He won the bronze medal in the 200 meters race at the 1968 Olympics, where his Black Power salute on the podium with Tommie Smith caused much political controversy. The John Carlos Story is his first book.

Dave Zirin is the author of four books, including Bad Sports, A People’s History of Sports in the United States, and What’s My Name, Fool? He writes the popular weekly online sports column “The Edge of Sports” and is a regular contributor to www.SportsIllustrated.com, SLAM, Los Angeles Times, and The Nation, where he is the publication’s first sports editor.