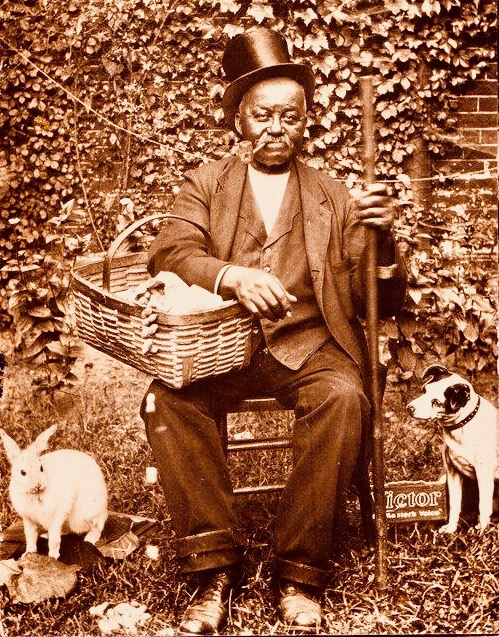 George W. Johnson, the first African American to sing on Record, was discovered singing and whistling on a Street Corner in New York City back in 1890, and his first recording session quickly followed. For the first 7 years of his recording history, his two fantastically popular song hits, “The Laughing Song” and the Whistling Coon were among the best sellers of the early to mid 1890’s. In 1897 he added “The Laughing Coon” to his recording selections, and recorded it on Edison Brown Wax Cylinder 4005 in 1898. Here is that same 1898 recording, featured here on an Edison 2 minute Gold Moulded Record from about 1903-04. The Edison Amberola Phonograph shown here is a 1910 Model 1A, in beautiful Mission Oak, and featuring the early style Rococo Grill and “M” combination 2/4 minute reproducer.

Johnson was born in Virginia, either in Fluvanna County or near Wheatland in Loudoun County. His father may have been a slave; if so, he was likely freed in 1853. From an early age, Johnson was raised near Wheatland as the companion and servant of a prosperous white farmer’s son. During his time with this family, he developed his musical ability and even learned to read and write, which was unusual for a black child in Virginia before the American Civil War. Johnson later worked as a laborer, and in his late twenties he moved to New York City. By the late 1870’s he was making his living as a street entertainer in New York, specializing in whistling popular tunes.

Some time between January and May 1890, Johnson was recruited by two different regional phonographdistributors who were looking for recording artists for their coin-operated machines. Charles Marshall of the New York Phonograph Company and Victor Emerson of the New Jersey Phonograph Company both heard Johnson performing in Manhattan, probably at the ferry terminals on the Hudson River. Both of them invited Johnson to record his loud raggy whistling on wax phonograph cylinders for a fee of twenty cents per two-minute performance. Although Johnson could whistle all the tunes of the day, one of his first recordings for both companies was a popular vaudeville novelty song called “The Whistling Coon”. Johnson sang as well as whistled, and also was able to give a boisterous laugh in musical pitch. From this he developed the second performance that made him famous, “The Laughing Song.” Although he recorded other material, including whistling the song “Listen to the Mockingbird” and some short minstrel show performances done with other performers, it was these two songs that Johnson would perform and record over and over for years. 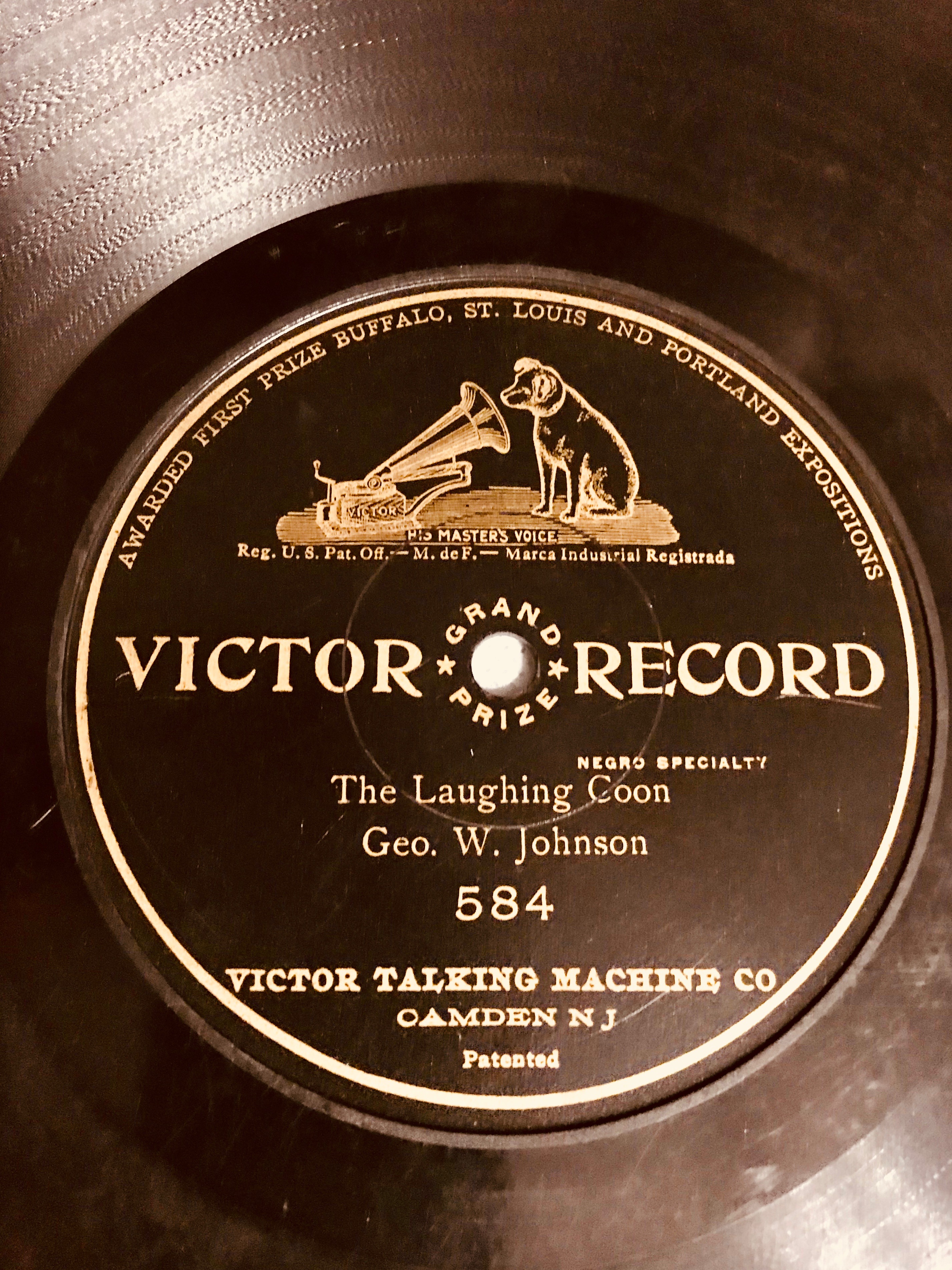 In the earliest days of the recording industry, every record was a “master“. A singer with a strong voice could make three or four usable recordings at once, with as many machines running simultaneously with their recording horns pointed towards the singer’s mouth. Johnson would sometimes sing the same song over and over again in the recording studio fifty or more times a day.

By 1895, Johnson’s two tunes “The Whistling Coon” and “The Laughing Song” were the best-selling recordings in the United States. The total sales of his wax cylinders between 1890 and 1895 have been estimated at 25,000 to 50,000, each one recorded individually by Johnson. Remarkably, the New Jersey record company marketed Johnson as a black man, during an era when much of American life was strongly segregated by race. “The Whistling Coon” was characterized by a light-hearted tune and lyrics which would be unacceptable today, in which a Black man is compared to a baboon.

Johnson continued recording for the New York and New Jersey companies, and in 1891 also started recording for their parent company, the North American Phonograph Company. At least one of his 1891 recording sessions was held at Thomas Edison‘s laboratory in West Orange, New Jersey. Johnson also made appearances on Vaudeville. His repertory on stage was pretty much limited to his two famous songs, but this was sufficient to get him bookings on bills.

In 1894, Johnson began recording with Len Spencer, a Vaudeville star of the era, and the two would remain friends until the end of Johnson’s life. In 1895, Johnson made his first recordings on the new disc technologyfor Berliner Gramophone. In addition to Berliner, Johnson recorded for Edison Records, Columbia, the Victor Talking Machine Company, the Chicago Talking Machine Company, Bettini and numerous other small cylinder and disc companies through the 1890’s and up to 1909 or 1910.

In 1897, Johnson recorded two new songs, “The Laughing Coon” and “The Whistling Girl”. They remained in the Edison and Columbia catalogs for years, although neither was as popular as his two original tunes.

By 1905, Johnson’s popularity had declined. New recording technology enabled the pressing of thousands of duplicate records from a single master, and Johnson was no longer needed to record each copy individually. His friend Len Spencer, now a successful artist and booking agent, hired Johnson as an office doorman. Johnson worked for Spencer and lived in his office building for several years, then moved back to Harlem. In 1914, at the age of 67, George W. Johnson died from pneumonia and myocarditis. He was buried in an unmarked grave in Maple Grove Cemetery in Kew Gardens, Queens, New York.

In 2013 the Maple Grove historical society began a campaign to honor Johnson, and received a grant from the MusiCares Foundation to erect a plaque on his grave site. On April 12, 2014, a century after his death, the singer was finally recognized in a ceremony including displays, presentations and a performance by actor Larry Marshall who impersonated Johnson.

False rumors have circulated that the first black recording star died either in a racially motivated lynching, or alternatively that he was hanged after he committed murder. While neither story is true, Johnson did have an ‘eventful’ personal life. There is no evidence that he ever legally married or had any children, but Johnson did have at least two ‘common-law wives’, both of whom died while living with him. The first, an unnamed “German woman”, was found dead in their apartment on West 39th Street in late 1894 or early 1895. No charges were filed. The second, Roskin Stuart, was found beaten and unconscious in their apartment on West 41st Street on October 12, 1899. Stuart was taken to the hospital and died a few hours later. Johnson was tried for first-degree murder and found not guilty.

In April, 2014, his c. 1896 recording of “The Laughing Song” was included in the Library of Congress’ National Recording Registry.