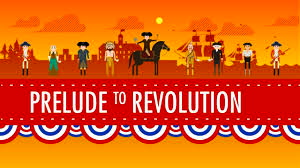 In which John Green teaches you about the roots of the American Revolution. The Revolution did not start on July 4, 1776. The Revolutionary War didn’t start on July 4 either. (as you remember, I’m sure, the Revolution and the Revolutionary War are not the same thing) The shooting started on April 19, 1775, at Lexington and/or Concord, MA. Or the shooting started with the Boston Massacre on March 5, 1770. At least we can pin down the Declaration of Independence to July 4, 1776. Except that most of the signers didn’t sign until August 2. The point is that the beginning of the Revolution is very complex and hard to pin down. John will lead you through the bramble of taxes, royal decrees, acts of parliament, colonial responses, and various congresses. We’ll start with the end of the Seven Years War, and the bill that the British ran up fighting the war. This led to taxes on colonial trade, which led to colonists demanding representation, which led to revolution. It all seems very complicated, but Crash Course will get you through it in about 12 minutes.